Y'know folks... I love a bargain... And while I am not opposed to spending some coin on fancy audiophile pressing of a favorite recording, there is something to be said for labels offering different levels of product (if you will) at price points for all buyers. The curious-but-budget-minded listener (such as yours truly, Dear Readers!) may not like forking over $40 for a MoFi pressing of, say, Fleetwood Mac's Rumors, when a perfectly good used copy may be sitting there in the same bins for $10-15 ... or less! 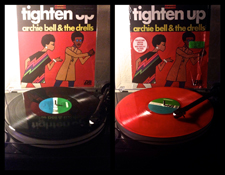 Buying used CDs and LPs are a great thing in that sense as you can experiment to see if you really like an album; if you do after finding it "for cheap" (if you will) THEN you can step up to some better version such as a rare original pressing or perhaps one of the aforementioned spiffy audiophile reissues.

In the case of vintage Soul and Rhythm 'n Blues records from the 50s - 70s the process gets a bit more complicated because finding original pressings in even halfway decent condition is not always an easy task. Many of these albums, if they sold at all -- it was not unusual for a single to be a huge hit while the album sold only modestly -- were popular party albums played on automatic record changers, stacked up with other hits of the day for non-stop dancing fun. The records were well loved and usually have scratches, scuffs, nicks 'n bumps to prove it.

Thusly... yes, thusly.... when I found a brand new copy of the classic 1968 pop soul album from Archie Bell and the Drells -- with its big hit "Tighten Up" on it -- selling for about $10 at Green Apple Books and Records here in San Francisco, I jumped at the chance.  And... it came pressed on spiffy red vinyl too!

For $10, I felt like shouting out all manner of internet flavored exclamations such as: w00t! and FTW!

In fact, I think that evening I did...

Curiously, after all this time I have not come across a better copy of this album out in the wilds of garage sales, thrift shops, flea markets and regular trips to the many fine music stores here in San Francisco.

And if I can't really find a clean copy here, I imagine you might be having trouble finding nice original pressing as well where you live (well, unless you live in NY, LA or perhaps Chicago).

So, when I read that the good folks at Music On Vinyl were putting out a reissue of Tighten Up I asked if I could receive a copy (full disclosure) so I could write up one of my informal but apparently useful (as I've been told by numerous readers) comparison / contrast "shootout" type reviews.

In fact, Dear Readers, you are now soaking in it! 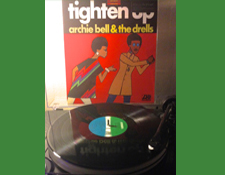 The first thing I noticed when putting on the Music On Vinyl version of Tighten Up, was how much quieter that album was than the budget priced colored vinyl reissue. Turning up the volume I noticed some other surprising things...

There was a greater sense of dynamics and apparent studio room sound from wherever the album was recorded. Hand claps were jumping forth out of the speakers as if the clappers were right in front of me (vs. being stuck in the speaker enclosures).

Much of the distortion which I thought might be unique to the red vinyl version was in fact common to the version by Music On Vinyl. Most likely -- and I am guessing here -- this is the sound of the how the music was probably recorded -- pushing instrument levels hot into the red zone, I suspect, especially on the drums and a young perhaps excited but not necessarily experienced Drell shouting into the mic as if he was on stage in a club. This album has that sort of live-in-the-studio vitality, capturing performances, not just takes.

This album was probably recorded before the days of volume limiters and such (again, I am guessing here).

The red vinyl version -- pressed by Rhino for Scorpio, for those of you interested in that sort of thing --  is not only louder but more compressed sounding in so far as overall dynamics go. Both versions thump and grind just fine, but on the Music on Vinyl version you can make out more details of the individual instruments.

Now, all things considered, for just $11, the red vinyl version is a fun spin. Had it been $15 or 20 I might be less forgiving.  That said, there is no doubt that the Music on Vinyl version boasts a more distinctive presentation of the music.

Yeah, hornier horns. Get yer minds out of the gutter, kids.

The strings on "Give Me Time" poping out of the speakers are.... Yes... stringier!

There is nice studio air around the drums and cymbals.

When he's not pushing the limits of the mics, Archie Bell's vocals are light and airy here as opposed to the very claustrophobic feel on the red vinyl budget release. 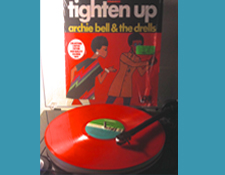 The Music On Vinyl version also simply feels more serious, weighing in at 180 grams, sporting a deluxe anti-static sleeve and such.

"But is it analog or digital," you ask?

Good question. And this is one of those instances, folks, where I'm almost comparing apples to apples in many ways. Now while I don't know for sure, its probably a fair guess that the budget red vinyl version was mastered from some sort of digital source. The music feels a little crunchy like that, especially as you turn up the volume on your amplifier, the harsh edges start to peek out around the edges.

I received confirmation from the folks at Music On Vinyl that their albums are indeed made from digital files provided by the record labels; in most cases (as in this instance) the files are at least at the high resolution level of 96 kHz and 24 bit level. That, coupled with more sensitive mastering, allows the music on Tighten Up to shine brightly. It is most certainly better than the budget release.

If you love this album and don't have time or patience for looking around for a pristine original, the Music On Vinyl version is probably going to be your next best option. Alternately, if you are just getting into vinyl or simply are just curious -- as I was -- to hear what the music was like on vinyl, the $11 bargain reissue may be a good place for you to start.

And as much as I like the red vinyl -- and you know how like my colored vinyl gems -- I will likely be getting rid of my budget version now. There really is no reason for me to play it again now that I have this nice Music On Vinyl pressing.

Now I really have something to w00t about!