OK folks, so here in this review I am going to try to justify why you should consider buying a legendary album by a legendary genre-bending band one more time for the up-teenth time. Consider that this reissue I'm about to tell you about may well in fact be the best, most super-duperest, über-deluxe version of said band's best album, ever! This is the version that you have waited all your life to hear and own: the complete run of shows recorded by The Allman Brothers Band live at The Fillmore East in 1971, presented in high-resolution surround sound on Blu-ray Disc. 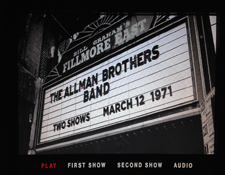 For those not in the know, the Allman Brothers Band were at one time virtually unknown outside of hippie rock music circles. A growing following were grooving on this new music which ultimately got branded, marketed and bastardized as Southern Rock. It was way more than that. The Allman Brothers' music was -- and still is -- arguably the crossroads where the blues, jazz and gospel go out drinking for the night with raw rock'n'roll.

That is perhaps why promoter and impresario Bill Graham fell in love with their sound, giving them more nights at his Fillmore clubs on both coasts than most any other band of the times and choosing them to close out the final nights of the venue in 1971.

After the release of the The Allman Brothers Band at Fillmore East album, the group hit the top of the charts and their legend was sealed for the ages as generations of guitarists discovered the still-spectacular, awe-inspiring playing of Duane Allman and his dueling stage partner, Dicky Betts.

Perhaps not coincidentally, shortly thereafter and for the next five or six years, most every hot band of the day released a multi-disc live album, most of which became big sellers. The Grateful Dead's Europe '72 to Deep Purple's Made in Japan to Yes's Yessongs, Peter Frampton's multiplatinum Frampton Comes Alive and of course Kiss's mega-selling Alive! Yeah, there were live albums before this -- The Who's Live at Leeds, Hendrix's contractual obligation Band of Gypsies and of course the Woodstock soundtrack -- but none really had the sonic impact that this one did.

The Allman Brothers Band at Fillmore East was a genuinely high-fidelity recording. I remember how it was often used to demonstrate the high-fidelity gear being sold in the early 1970s at places like Tech Hi Fi and Crazy Eddie's in the NY area. It was one of those albums you put on to impress friends with the sound of your stereo. 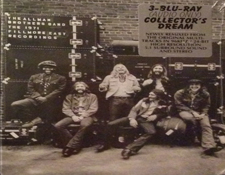 The album was created using one of the fancy mobile studios which were still a relatively new thing at that time and place. This was the days before computers and Pro Tools, folks. We're talking about a truck (or sometimes even a mobile home RV) that was rigged up like a professional, state-of-the-art recording studio of the times with 8- or 16-track capabilities. Now you could really capture the essence of a live concert in a very high-fidelity manner and share it with the world.

And react the world did! This album reached #13 on the Billboard charts, which is pretty amazing for a record that only had seven songs spread over four album sides and no real singles.

Additional pieces of the concerts trickled out, such as on their follow-up release Eat a Peach and also on the Dreams box set. Fuller-still snapshots of the concert were put out in the early 1990s as The Fillmore Concerts. This was better, but still incomplete; it was only a matter of time before they would get around to opening up the vaults.

Over the years, the concerts that made up album The Allman Brothers Band at Fillmore East have become a sort of holy grail for the hardcore fan, with collectors trading hissy multi-generation cassette tapes leaked out and copied over and over, all studied over with near-religious fervor. The hardcore fans wanted to hear more of the full shows, not just the highlighted best bits.

As many a Deadhead has been known to say regarding recordings of their favorite concerts: "... just give us the full shows, maaan."

So here we are in 2014 and many of those boomer generation fans who were young hippie folk in 1971 are now contemplating retiring or at minimum hopefully spending some quality time at home listening to their favorite concert recordings through nice living-room home theater systems. And thus here we come to that moment in time when Universal Music has finally graced us with what must be the definitive issue: The Allman Brothers Band: The 1971 Fillmore East Recordings.

Yup, that is true. This is the complete thing. You get the full first and second sets from the March 12 and 13 shows in 1971 as well as the full June 27 Fillmore closing show.

Of course, so much of this has been released before, why should anyone really care about this right now?

The simple answer is that this is the first time that they have put this music out on Blu-ray Disc, with all the performances together in one package, offered in 96 kHz / 24-bit high resolution in both stereo and 5.1 surround sound.

THAT is why we should care!

The Allman Brothers Band The 1971 Fillmore East Recordings sounds just wonderful. These are all the unedited performances, warts'n'all. So if you aren't prepared for that experience, it may not be for you. The original album version is still around and in print on vinyl again. Its a classic live album.