The first CD in Omnivore Records' new three CD set Big Star Complete Third opens with a simply stunning 12-string acoustic solo demo of singer songwriter Alex Chilton singing an early version of his song "Kanga Roo" (then called "Luke St. Joan."). It sets the tone for much of the rest of this fine set and as you dive deeper into the disc you realize this isn't going to be a rag tag collection of bottom-of-the-barrel throw-aways and recording studio floor-sweepings. 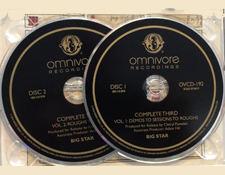 Big Star Complete Third presents high quality embryonic recordings by one of America's great and under appreciated songwriters -- Alex Chilton -- as he formulates the backbone of the great batch of songs that eventually became regarded as the last recordings by his band, now commonly known and loved by millions around the world as Big Star's Third.

Over the years the heart of these recordings have been issued by various and sundry labels in different track listings, packaged in sometimes questionable cover art and always wrapped in much mystery.

So much mystery that the recordings have taken on near mythical status. There is even a superstar alliance of Big Star fan-musicians, extended band-family and even one original member -- drummer Jody Stephens -- which has toured this fascinating music to rapturous audiences across the country. I saw them perform it at the Hardly Strictly Bluegrass Festival in Golden Gate Park last year augmented by The Kronos Quartet conducted by no less than Van Dyke Parks. 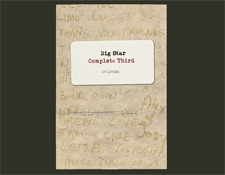 Anyhow, once again the folks at Omnivore Records need to be applauded for their dedication to doing archival reissues right, especially when it comes to Big Star. One of their first releases several years ago -- and my introduction to the company -- was in fact a limited edition recreation of a test pressing determined to contain the most likely official running order for the 3rd Big Star album that was never issued commercially when it was first recorded).

Now, many of the tracks on Big Star Complete Third have subsequently appeared on various and sundry compilations over the years but this is the first time they have all been put in one place at the same time -- so the impact of that is not to be underestimated.  This set contains 69 tracks, 29 of them are previously unreleased.

Just hearing all of Alex Chilton's acoustic 12-string guitar and voice demos for these songs back to back --  from "Thank You Friends" to "Jesus Christ" to "Holocaust" -- is spectacular in its own right.

Big Star Complete Third takes you from these demos through to rough mixes and experiments to test mixes to the final masters. Some tracks have guide vocals in full band takes. There are, no doubt, some tracks that are of lesser sonic and performance quality but which are included for the sake of completeness. 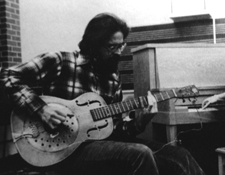 For example, their off-the-cuff work through of Marc Bolan's "Baby Strange" rivals some of  The Beatles' Let it Be / Get Back sessions for burned out, toss-away splendor.  "Pre-Downs" is a bit studio weirdness that plays out sort of like a more compact, indie rock "Revolution #9" (Beatles).  On the rough electric guitar and vocal run through of The Beatles' "I'm So Tired," Alex Chilton sounds perhaps more genuinely exhausted than John Lennon did on his original.

But mostly the recordings here are of a very quite high quality. There are some gems such as the previously unreleased "Lovely Day" (which feels sort of like if Game Theory's Scott Miller went for a hike in the country). The strategically placed rough mixes of "Kanga Roo" (Fry Rough Mix) next to a previously unreleased version of The Velvet Underground's "Femme Fatale" makes the genesis of the former quite clear -- they play both songs revolving around similar guitar signatures, one of many ah-ah type moment even hard core fans of Big Star will probably make when listening to this set.

I really like the Alex-led vocal version of Jody Stephens' "For You," another previously unreleased track.

So by now some of you, Dear Readers, may be wondering how this all sounds in comparison to, say, the vinyl test pressing of Big Star's Third which Omnivore issued several years ago in a very limited edition (I have one of the 500 clear vinyl 2nd pressings). The CDs sound good and will be fine for most listeners who want to hear the archival material in a generally high quality manner... But, at the end of the day, they are CDs so if you start turning up the volume you'll probably feel some of the inevitable digital flavoring there (which gets warmed up a lot more on the vinyl). 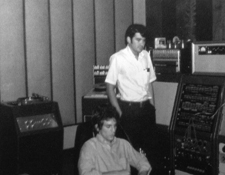 Fear not, intrepid Big Star time travelers... In November, Omnivore will issue all this material in a series of three two-LP sets. So for those who need to get this material on a fairly definitive vinyl version, that may be something you may want to look for this Fall. I may well spring for first volume so I can hear those lovely acoustic Alex Chilton demos in (hopefully) best possible fidelity.

With its detailed 32 page booklet (that I'm still reading through), this is a very nice set for the completist and I'm happy that it has been released in this very well curated manner. Bravo Omnivore!

Now my only real wish is that Omnivore would drive a proper reissue / restoration of Big Star's first two albums in a very high quality manner as the current reissue editions I have heard leave much to be desired.

One big star step at a time...