Some of you readers might be surprised to find out that I am a fan of some modern electronica and even soul-infused hip-hop-ish sub genres like Acid Jazz, Trip Hop, etc. I use the term "fan" loosely in that I've not (yet) gone super deep on collecting the complete catalogs of some of these artists I like -- something I tend to with artist or groups I really get into, sort of obsessively.

But I know it has surprised some of my friends when they have found out that I do have in my collection more than a few albums by the likes of Meshell Ndegeocello, Toro Y Moi, Massive Attack, The Orb, Discovery and such. 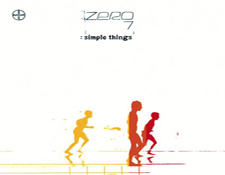 I own albums and singles by Depeche Mode, The Human League, New Order and OMD.

Heck, I have long owned (and enjoyed) the lone album by The Silicon Teens, the virtual group formed by Daniel Miller, the founder of Mute Records.

(It is kinda hard to pin me down to any one category....)

Going back further to some of the older school roots that helped inspire music like what I'm going to talk about in a short bit... I'm a long time fan of Brian Eno's ambient works as well as his spin off projects and collaborations with the likes of Laraaji, Harold Budd, Daniel Lanois and Robert Fripp.  I like the modern minimalist classical composer Philip Glass a whole bunch. And you can't really be a fan of The Who's "Baba O'Reilly" without exploring one of the grandaddies of all things minimalism, Terry Riley (and his seminal composition, "In C").

All of these types of music tie together and have in many ways influenced one another over the years.

Every now and then an album will jump out at me and grab me by the throat due its fine combination of melodic hooks, cool production aesthetics and overall feel.  One such discovery happened recently while I was in Orlando on a vacation trip and had the good fortune to meet a local record collector / DJ who took me around to some of his favorite haunts. One such off the beaten track place was a fine and funky little store called East West Music. As I started looking through their used and collectible albums bins, some haunting music came on that caught my ear and made me stop what I was doing and run up to the counter to ask: What Is This??

(No, I didn't even THINK to consider using my iPhone's Shazam app -- and I'm glad I didn't as I wouldn't have heard the following....)

The woman running the store smiled at me widely and showed me the album by Zero 7 called Simple Things and exclaimed something like (loosely paraphrased) : 'Its only the best album that came out in 2000! People say there is no good new music anymore but there is!  And it has just has been reissued on vinyl for the first time in the U.S.'

She was genuinely excited about this release and I can understand why... 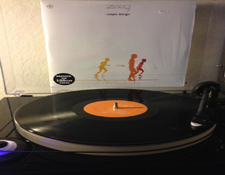 Now, before I go much further, this is a good time for me to remind you all, Dear Readers, of the fact that -- well, at least in my experiences -- one of the best ways to discover new music is to visit and spend some time in physical music stores, where the staff are privy to the latest things and are on top of cool things their customers might be into. More often than not, the stores with staff who have good taste in music tend to stay in business longer too.  This is how I learned about The Smiths, The Cure, Built To Spill, Bettye LaVette, Solomon Burke, Caspian, The Bongos, Marshall Crenshaw, Elvis Costello, and so many others.  And now I'm adding Zero 7 to that list.

Not on radio. Not on the Internet. Not even by world of mouth from friends. I got my first tastes of all of these artists at a physical brick-and-morter record store.

(So get out to a store and shop for some music already!!)

Anyhow, back to my shopping experience at East West... so as I flipped through the used bins, I listened attentively more and more to this Zero 7 album they were playing and was digging it more and more.

So, by the time we had to leave, the only album I actually bought was in fact this sealed, brand new long playing vinyl record reissue of the album called Simple Things by Zero7.