If you don't like the story you're in, well then pick up your pen and then write it again... 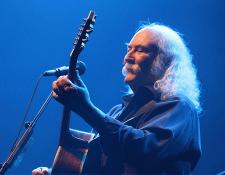 These are sage words from a man who has been there and back and then some in life, David Crosby.  In case you were not aware of it, Crosby (aka Croz) has been enjoying a remarkable career renaissance over the past 20 years or so. Sober, focused and productive, his output trajectory has been quite remarkable.

I first started taking note when he began working with his son, James Raymond, on the group CPR (with guitar wizard Jeff Pevar filling out the center initial). Then there was a great album or two with Graham Nash which went unnoticed by many (click here for their fine eponymously titled album from 2004). And then I heard the album Croz which I reviewed (click here). Eventually I got to see one of his tours with his fabulous band and got an early peek at the fantastic Sky Trails album (also reviewed, click here). 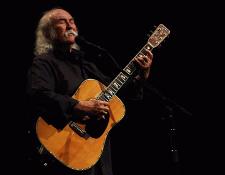 Crosby is on a roll, in fantastic voice and creatively more spirited than he's been since -- arguably -- his debut solo album in 1971, If I Could Only Remember My Name.  These albums remind me of Joni Mitchell's mid-70s, jazz-inflected works  (and thus it is no surprise that some covers of her songs come up on these albums).

I recently picked up a couple of Croz's renaissance albums on vinyl and thought it was a good time to look back at his wonderful new wave of music thus far.

Since I previously reviewed two of these albums, I'll just update them to discuss how the vinyl and streaming versions I've heard sound.

HERE IF YOU LISTEN 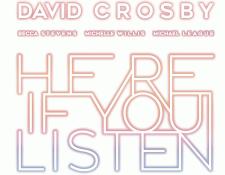 There are so many great songs on this collaboration with members from the Snarky Puppy collective including Becca Stevens, Michelle Willis and Michael League.  And while it is no doubt and equal partners collaboration, the voice and musical voicing of the recording is ultimately that of David Crosby album.

Some of my favorites on this include the opening track "Glory" and "1974" (which provided the opening quotation at the head of this review).  I mean, really, all of side one is fantastic -- "Your Own Ride" and "Buddha On A Hill" round out a near perfect mini song cycle.

Side Two is great too. "Balanced On A Pin" is one of those haunting Crosby melodies we all came to know and love around the time of the first CSN album -- think "Guinnevere" or if you know his first solo album, "Traction In The Rain." Becca Stevens' "I Am No Artist" is a stand out with its haunting guitar signatures and very Joni Mitchell-esque vocals (that is a good thing, mind you) along with Crosby's trademark richly-layered harmonies.  In fact, the album ends with a Joni song, a reverential cover of her classic song "Woodstock." 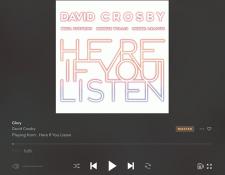 The vinyl pressing sounds generally warm and inviting. The pressing is on dark vinyl and is well centered. The only problem I had is that there is some surface noise which for often-hushed music like this can get in the way. At least that was the case playing it on my somewhat too sensitive turntable that is fitted with a Goldring 2400. This happens periodically, especially on older albums from the 70s and some newer ones (see my review here of the recent Stills-Collins album). True to form when I played the album on my secondary turntable with a more forgiving stylus, it actually sounds quite lovely and quiet. So, be aware of that. Your experience may vary.

Click here to listen on Tidal in 24-bit, 44.1 kHz MQA fidelity and here for Qobuz in 24-bit, 88 kHz fidelity.  Curiously, the Tidal version sounds warmer than the Qobuz version which is a bit brighter, yet not especially compressed. For me, this was evident around the vocals. Both are fine, but there is a difference in how the sound gets processed, for sure. 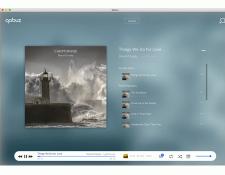 Lighthouse is the only album of the three here that I didn't have in some form prior to this review. From 2016, it is a lovely, mostly acoustic recording produced by Michael League of Snarky Puppy, a developing work friendship clearly pointing to the most recent album, Here If You Listen.  Accordingly, this album is something of a transitional album toward that sound they nailed a couple years later working together as a group.

Curiously, it is only streaming in CD quality on Tidal (click here) which sounds ok. It is on Qobuz in HiRes 24-bit, 88 kHz form which sounds quite a bit nicer (click here), especially on the guitars which feel much warmer sounding. "The Us Below" could be a great demo track, with its big fat multi-tracked acoustic guitars, dense vocals and widescreen Stereo separation -- I would love to hear this one remixed into Surround Sound! 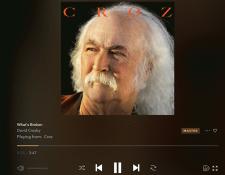 You can click here for my original review of Croz's re-entry point album, and what a fine starting point for reinventing one's career!  I only had Croz as a high resolution HD Tracks download, which sounds great. I just checked it out on Tidal and was happy to find it streaming in MQA format at 24-bit, 192 kHz high resolution -- same as the HD Tracks version! It sounds quite terrific, crisp and clean without sounding digitally harsh edged.

Click here to listen to the Tidal MQA version and here for Qobuz version in 24-bit, 44 kHz fidelity (the latter sounds good, but its not as big as the Tidal version). 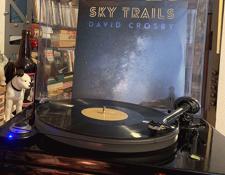 You can click here for my original review of Croz's third renaissance album which I made based on the CD purchased at the concert months before official release.  There are some great tunes here! If you'll pardon the cliche, "Sell Me A Diamond" really rocks on the LP version -- its one of those songs that could be easily morphed into a CSNY tune in a heartbeat.  And on Side 4 you get two bonus tracks spinning at 45 RPM for better fidelity still. "She's Got To Be Somewhere" feels like a lost Steely Dan track (and that is a very sincere compliment).

The vinyl version of Sky Trails is really quite sweet. It is pressed on nice dark, thick, well centered and quiet black vinyl with a decidedly warmer flavor than I remember from the CD version. It might be my favorite version although the 24-bit 44.1 kHz versions on Tidal and Qobuz are quite punchy in their own right even though there is some digital edge there.

There are pros and cons to each. The vinyl is warmer but the bass is a wee bit more distinct at times on the streaming versions.  These are generalities to underscore the notion that there are tradeoffs you'll have to explore to see which you prefer.  Click here to listen on Tidal and here for Qobuz.