Just yesterday, I read a first review of Grado's new and violently expensive phono cartridge, the Epoch. While Bob Levi's rave review neither can, nor should be challenged (Bob is President of the Los Angeles/Orange County Audio Society - the world's biggest HiFi club -- and has both a remarkable reference System and remarkable ears for enjoying and evaluating it), at US$12,000, it was obvious to me that the Epoch is hardly a cartridge for the masses. 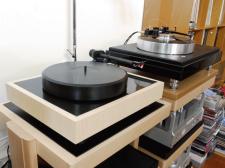 There are "masses" out there, though, who, for whatever reason -  perhaps for nostalgia, if they are older; for a rewarding new sonic experience, if they were born after 1982, the year the CD was introduced; or simply because they like the sound better - are turning to the phonograph record as a major source of musical enjoyment. Whether to take advantage of a record collection they may have accumulated over the years; to be able to play a collection they may have recently acquired; or to start a new collection of their own, these people are looking to buy new record-playing gear, and in this series of articles I'll be offering some thoughts on how to do it, including some that may even help to save some money in the process.

My first temptation at this point in any of these series of articles is always to start with the history of what we're talking about. I won't completely depart from that tradition, this time, but I am going to skip over a whole lot of past practice and technology simply because - even despite our hobby's known tendency to declare prior technologies "classic" and resurrect them (the phonograph record, itself, being one perfect example), there's little likelihood that those wax cylinders (or their tinfoil predecessors) will be back any time soon.

What I will do in this series is to take a look at past technologies both in terms of their practical application today and how, in certain circumstances, they might actually offer some advantages for you to enjoy or save a buck on. Conversely, I'll also mention a couple of modern "features" that may seem appealing, but might, IMHO, better be avoided.

Perhaps the best way to get started now is to tell you that, when I first got into hi-fi, more than a half-century ago, phonograph records were - other than a very few pre-recorded tapes - the only recorded music source commercially available. And that Julian Hirsch -- by far the most influential of the hi-fi reviewers of his time -- wrote and believed (as we all did, perhaps because of him) that, with, typically, only one-percent or less harmonic (THD) or intermodulation (IM) distortion, the electronics of the day were (After all, who could possibly hear distortion of only one percent or less?) as close to perfection as they ever needed to be. According to him, the only things that needed to be improved to make our Systems indistinguishable from "live" sound" (The famous "Memorex" test) were their electro-mechanical components - the speakers and the phono cartridge. 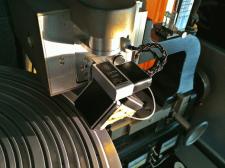 Back then, those were the only things that anybody believed to make an audible difference: The electronics were "perfect", making no contribution to the sound other than its volume; the turntable was just something to turn the record in the right direction, at the right speed; the tonearm was just something to hold the cartridge in position as the "needle" tracked the groove; and the System's cables - all of them, from the phono cable to the speaker cables - were just wire and, as long as they were intact and properly connected, they obviously made  no sonic difference at all.

All phono cartridges in those days were either "crystal" (Rochelle Salts") or "ceramic" (an artificial piezoelectric material) that produced a voltage when flexed (as by the "wiggling" of the stylus ("needle"), and used a screw-in user-replaceable needle made of steel, osmium, sapphire, diamond, or - in the earliest times - even an actual cactus needle, which, being soft, was thought to allow for longer groove-life. The outputs from these early cartridges were huge -- with a full Volt (= 1,000 millivolts ― more than 300 times the output of a typical modern "magnetic" cartridge) or even TWO full Volts of output being regarded as normal, and with "self-equalization" being another of their normal characteristics.

Recording music onto a disc by cutting a signal-modulated spiral groove into it, and then playing it back by (to use my favorite applicable quote, for which I'm sorry I can't provide a source) "dragging a rock through it" has certain inherent problems: For one thing, because in order to make the recording, a cutting stylus must, as the recording "blank" turns, swing from side-to-side (for mono or at 45°/45° angles for stereo)  in a pattern analogous to the frequency and amplitude of the sound to be recorded, it's easy, if you're not careful, to overdrive the cutting stylus and produce a groove pattern swinging so wide at high amplitudes and low frequencies that it will actually cross itself (one portion of the groove crossing-over into or even beyond the adjoining groove sections). If this happens, the most likely result will be a "click" at the crossing point, and the "skipping" of the stylus into the crossed groove section, to produce the classic "broken record" continuing repetition.

Obviously, to prevent this crossing-over from ever happening, equalization to reduce the amplitude (the "swing") of the bass in recording and to restore it in playback is necessary. Perhaps less obvious is the fact that equalization of the "highs" is necessary, too.  High frequency groove swing is very much less than that for bass frequencies, so there's never a need to worry about the groove sections crossing.   A "hissing" noise, though, (the sound of the playback stylus sliding along the groove surface) is a natural (and annoying) part of the playback process. Adding high frequency "boost" (positive equalization) as the record is cut and then reducing it ("high frequency roll-off") in the playback process gets rid of this and leaves the record sounding clean and hiss-free.