What Gets You More? $10,000 On the System Or A Few Bucks and Some Time Spent On Your Room?

One of the things that audiophiles and Home Theater fans seem to forget is that their room is as much a part of their System as any of its other components - and that it can have at least as much effect on the system's overall performance. 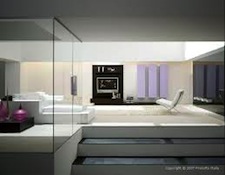 I had the occasion a while back to visit the genuinely magnificent home of a wealthy audiophile in Northern California. He had one of the most impressive High End audio systems I've ever seen, housed in one of the biggest and most architecturally exciting listening rooms I've ever been invited to visit. Frankly, though, the sound SUCKED!

Although he had spared no expense on either his equipment or his collection of treasured classic recordings, the room was HARD and both visually and acoustically sterile, and had so many reflections, resonances, and acoustical anomalies that realistic imaging and soundstaging was impossible and the overall tonality of anything played in it seemed to have been "bleached", compressed, and shifted upward. 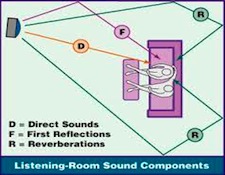 For far less than the cost of any one of his components, he could have made a significant improvement in his total listening enjoyment; made his room look better and improved its "wife acceptance factor"; and -- while still keeping its Architectural Digest quality -- made it suitable for the pages of one of the audio magazines, too.

Some of the following might work for you, too, so, if applicable, give them a try!

The first thing he could have done was to pull the speakers away from the back wall. His were, for whatever reason, flush with it, and -except for certain speakers specifically designed to be in contact with a wall or a corner (which his weren't) that's NEVER a good idea. Just bringing the speakers out into the room a few feet would almost certainly have improved their imaging and soundstaging, and wouldn't have cost him anything at all! 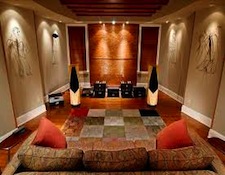 He could also have placed area rugs on the polished wood floors in front of his speakers. With hardwood, tile, linoleum, or any other kind of "shiny" flooring, rugs, or even (if you're into such things) something exotic like a cowhide or a bear or lion skin in front of the speakers will do much to stop "first bounce" reflections off the floor and "second bounce re-reflections off the ceiling.

Plants (preferably large, tall ones, with big leaves) will not only make a room look better, but, because they can function both as absorbers at low frequencies and as random diffusors at high frequencies, they can make it sound better, too. Use them behind, to the sides of, and, depending on the room, maybe even between your speakers. Placing a large plant in each corner of the room can also help bass response, imaging, and overall tonal balance. Give it a try. 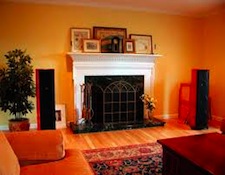 If the room configuration (and your wife) will allow it, putting textured wall hangings (anything from a patterned shag rug to a large-area metal or wood sculpture) at the "first bounce" point on each of your side walls will improve not only the sound but the room's appearance. (The "first bounce point" can be calculated by dividing the dispersion angle of your speakers at 1 kHz by two and then, starting from directly in front of each speaker, finding the point ON THE SIDE WALL NEAREST THAT SPEAKER where that angle hits the wall. Dispersion specs or polar pattern diagrams for your speakers are often published as part of the instruction manual you get when you buy them. If not, or if you no longer have the original manual, they can often be gotten from the manufacturer. If you don't have them or can't get them, another - perhaps even easier - way to find the right spot is to kneel at the side wall closest to each speaker with your ears at tweeter-level and just LISTEN. If you start from a point even with the speakers and, KEEPING NEXT TO THE WALL, move AWAY FROM the speakers (back more toward your normal listening position), you'll find that, because you're out of the tweeter's "pattern", the sound will start-out being dull and flat, and that as you move farther away from the speakers (still keeping next to the wall) the sound will start to get better and have more highs. The point where it first starts sounding normal is, or is close to, the "first bounce" point.)

Plants, area rugs, and things to hang on the wall can be cheap as compared to the cost of better speakers or other components, and it's been my experience that they can make a tremendous improvement to a system's sound. I'd certainly rather spend a few hundred dollars for them than thousands for other things that might not even make as much difference. How about you?