Compared with setting up a room-based system, setting up a desktop system is relatively easy. But to get optimal performance you must make sure your speakers are properly located, both in terms of precise triangulation with your ears as well as vertical position. 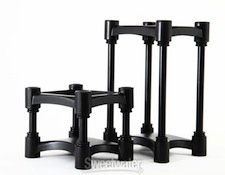 I've found that getting a loudspeaker off the desktop is an important part of setting up a nearfield system. In some cases it changes the overall image presentation drastically - from second balcony position to front row center. In the past I've used all manner of risers - blocks of wood, high-density foam squares, and even dedicated desktop speaker stands. Dedicated stands are best.

For several years I've known about IsoAcoustics and their line of desktop speaker stands. Last month I felt flush enough to buy IsoAcoustics medium sized ISO-L8R155 stand from Sweetwater Sound for $99. You can try hunting around for a better price, but all the places I checked had the same price, and since I know from past purchases that Sweetwater has great customer service, I bought the IsoAcoustics stands from them.

The ISO-L8R155 stand is very similar in size to IsoAcoustics small $79 stand except that the medium's top surface is 6.1" by 7.5" instead of 5.1" by 6". IsoAcoustics makes five different sized models. One is even large enough to support a subwoofer. Like most IsoAcoustics stands height is adjusted via sets of columns. The short columns makes the stand 3" tall while the high columns raise the stand to an 8" height. The IsoAcoustics stands also come with two sets of tilt extensions that lets you tilt the top of the stand up or down and allows for two different angles. 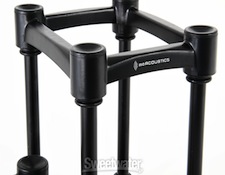 The basic design of the IsoAcoustics stands employs rubber cups, which the columns fit into. These cups isolate the top and bottom sections from the center columns. While this solution does a decent job of isolating the stands, it also makes the stand slightly flexible in terms of lateral movement. If you want or need a rigid stand, the IsoAcoustics won't fit your requirements.

At first I tried the shorter, 3" columns when I assembled the IsoAcoustics stands, but after a couple of minutes of listening I decided to change over to the 8" columns. The changeover took about three minutes - all I had to do was pull out the 3" columns and replace them with 8" ones and then push the stand back together.

The 8" columns do have substantially more flex and potential wobble than the 3" columns, but on my desktop they provided the right height boost to put the tweeters on the pair of ATC SCM 7 mark III (review in Home Theater Review soon) about 1 ½" above ear height. When I put the Audience 1+1 speakers on the IsoAcoustics stands the center of the driver was four inches below ear height. 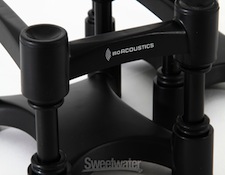 After a month of use my principal complaint with the IsoAcoustics speaker stands is that I wish they had a 5" column option. I'll be adding a set to my pair of stands by making my own. Also at higher volume I can feel the columns vibrating in sympathetic resonance with the music so I'm planning to tweak the columns by adding some Mortite to their hollow sections to kill their internal resonances.

For just under $100 the IsoAcoustics ISO-L8R155 speaker stands are certainly a cost effective and flexible desktop set-up solution. I'll be using my pair for all my future desktop speaker reviews since they've proven to be just the thing to get speakers positioned so they can sound their best.