The other night, I was on the phone with John Curl (Yeah, that one -- the designer of gear for Mark Levinson, Vendetta Research, Parasound, Constellation, and who-knows-how-many-others), talking, as we often do, about any number of things, when John mentioned that he had recently hooked a pair of the Enigma electrostatic super-tweeters up to parallel his main speakers, and had gotten an important improvement in how "real" everything sounded. 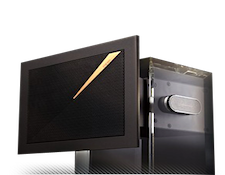 What makes this interesting is not that the Enigmas are good, but that they made what John was already using sound even better. Let me just say that John's main speakers are a very expensive and very well-regarded model from a top brand of audiophile speakers that has had audiophiles all around the world lusting for it ever since the brand's first appearance, years ago, so it's NOT like the Enigmas are just filling some kind of a performance gap on some less-than-wonderful speakers. In fact, both the Enigmas and the main speakers (No, I'm NOT going to tell you what they are. If you really want to know, ask John) have high frequency response far beyond even the very best human hearing, so it can't just be that the add-on tweeters are supplying treble energy that the main speakers can't provide.

In fact, the whole thing really is an... enigma (Sorry, I couldn't resist it), and had both John and me trying to figure-out how it could possibly work for a good long time.

One important clue is the fact that, to add the Enigmas, you just add them. You DON'T disconnect the tweeters in the main speakers or use any kind of filter or crossover network to roll them off. What that should mean is that, unless the Enigmas are played so quietly that you can't hear them - in which case they would reasonably be expected to have no effect at all - they must be, depending on whether the two are in- or out-of-phase with each other, either adding to or subtracting from the sound of the main tweeters. In either of those cases, you'd expect to hear - assuming that your ears go up that high - either a "dulling" or a "brightening" of the sound in the upper registers, neither of which seems to happen. All that DOES happen is that, when the Enigmas are hooked-up and playing, the sound seems somehow more "real". 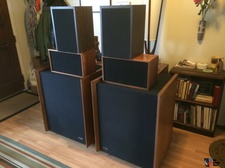 That got us thinking about the old Fulton Premier speakers, which, in addition to a woofer, a mid-range, a tweeter, and a super-tweeter, used a "super-duper-tweeter" that crossed IN at 45kHz and claimed to extend the system's response to 80 KILOHERTZ -- well into bat territory!

Even at the time (back in the 1980s), people were baffled by the Fulton Premiers and ― pointing out that there was no recording or playback medium then (or probably even now) that could handle frequencies that high ― said that the Fulton's extreme-upper-range tweeter (the super-duper-tweeter or "SDT") was worthless, and had to be nothing more than a marketing gimmick.  Even so, there were people who claimed that they could hear the difference when it was blocked-off or removed from the circuit.

Assuming that the SDTs really WERE doing something and that it was NOT simply audiophile voodoo or placebo effect, what could they possibly have been doing?

It was John who came up with the idea that they were acting to improve the "leading edge" of the reproduced waveforms, even on frequencies below the normal tweeter range.

The way any driver that uses a physical diaphragm produces sound (there are some that have no physical diaphragm, but, like the old Plasmatronics or Ionovacs, use a "corona discharge" or plasma effect, instead) is by moving its diaphragm back and forth to produce pressure waves analogous to the waveform of the input signal from the amplifier driving it. Because all physical diaphragms are subject to inertia ― the tendency of any object at rest to remain at rest, or any object in motion to remain in motion ― the diaphragms never follow the signal waveforms exactly, but hesitate a little, either before starting to move in response to the input signal or before stopping in response to the signal's stopping or change in polarity.  When the diaphragm starts slowly, as ALL physical diaphragms must do, it "softens" (slows and "rounds-off") the leading edge of the waveform and, to the degree that the "rise time" of the produced pressure wave differs from that of the driving signal, constitutes a distortion in timing that is easily perceivable to the human ear, and may be the reason why, even from a distance, we can usually tell the difference between "live" and reproduced sound.

When a driver continues moving, even after the signal has stopped or changed direction, it's called "overhang", and produces a "back-electromotive-force" [back EMF] that an amplifier's "damping factor" works against to control the driver. There's nothing, though, to counteract the initial inertial "lag" produced by a physical driver.  Certain kinds of drivers do, however, work to minimize it. In fact, ANY driver that has a great deal of "motor" structure relative to the mass of its diaphragm will have that effect. The compression drivers used in horn speakers fall into that category, with a very small (low inertial mass) diaphragm being moved by a very powerful magnet structure and coil assembly. That could be an explanation for the quick and very "real" dynamics that horns are famous for. Planar speakers, too, either the "electric blanket" style, like the Magnepans or those from Eminent Technology, which have a "coil structure" printed on a low-mass diaphragm driven by magnets on either one or both sides, or electrostatics, like the Enigmas, Martin-Logans, or my own three pairs of Acoustats, which use an electrically-charged extremely low-mass diaphragm, attracted and repelled between opposite-charged "stators", are known for their extremely fast rise times and, perhaps correspondingly, high degree of sonic realism. 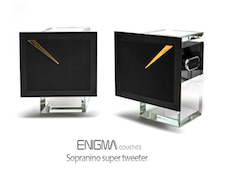 It's possible, John and I agreed, that it's the super-quick rise-time on the Enigma SDTs that allows them - even when they're not played loudly enough to add extra brightness -- to augment the speed of the leading edges of the music played by the main speakers, and thus do their remarkable job of  adding realism to what we hear.

That's only the result of a phone call, of course, and NOT any kind of serious research or experimentation. Even so, to John and me, it seems to make some sense.

What do YOU think?