This morning a pair of crating and shipping guys arrived and took away my two Dunlavy SC-VI and one Dunlavy SC-IV speakers. I watched with mixed emotions - glad I had found a buyer and a way to get the speakers from me to him in one piece, but bummed because I really, really, loved those speakers. They made my reviewing job easy - every change to the system was immediately obvious, now that essential reviewing tool is gone forever. 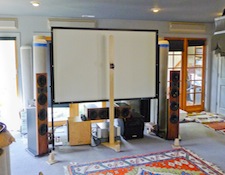 To replace the Dunlavys I have temporarily installed my AV123 Skiing Ninja-modified X-Static and x-Voce speakers in my soon-to-be-vacated big downstairs room. At first I put them roughly where the SC-VI speakers had been. This placement proved to be much too wide spacing for the X-Statics, leaving a gaping hole in the center of the soundstage. I gradually moved them closer together and just about the time when I ran out of space to move them any closer as they were both right up against the outer edge of J. Gordon Holt's original 7 ½ feet wide Stewart projection screen, the imaging finally snapped into focus. I should have expected this since the Dunlavys, in my experience, need to be set up wider apart than almost any other speaker I've ever had in a system. It's just the way they were. My final speaker position for the X-Statics left them about three feet closer together than the Dunlavys had been.

After letting them run in for a couple of hours and listening from the next room (the speakers had been sitting unused for several months) I sat down for some critical listening. The first big change was the size of the soundstage - it was smaller than what the Dunlavys had created. Everything was still in proper perspective and in relationship to each other, but instead of a twelve foot wide soundstage, it was not only ten feet. But what was interesting was that I was more aware of spatial information coming from outside the edges of the speakers themselves with the X-statics than I was with the Dunlavys.

After a couple more hours of tweaking - putting on spikes, fine-tuning the speaker position and finally adding some ASC Tubetraps that I had removed when the Dunlavys vacated the room the X-Statics were sounding mighty fine up through mezzo forte levels. But at triple-forte climaxes I noticed the X-statics exhibit some strain, which is something the Dunlavys never do/did. 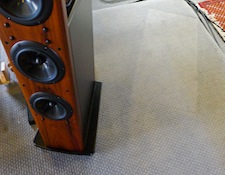 But one thing I'm noticing that is rather surprising - the X-Statics have more upper midrange and lower treble energy than the Dunlavys had. All music, including my own recordings are just a bit brighter and better illuminated by the X-Statics. This is the sort of difference that would send most audiophiles scrambling for something to make the system "more musical," but I'll hold off the hair pulling and cable swapping for a later date. Yes, the system is brighter, but I'm also hearing more detail, so it's more of a trade-off than a loss.

Every time I walk into the room that used to house the Dunlavys I'm amazed by how small the X-Statics are in comparison to the SC-VIs. And while I wouldn't say the Skiing Ninja-modified X-Statics are as good a speaker, all around, as the Dunlavys, I will say that in some performance areas the X-Statics are the Dunlavy's peers and in one particular area - upper midrange resolution, the X-Statics are actually more revealing. But I guess that's one of the reasons we audiophiles need to change gear every so often - because if you don't make comparisons, you'll never know what you are missing (or gaining) sonically speaking.

So there you have it, the latest installment of what I might start calling "The Moving Audiophile" because it has a nice ring to it.