In Praise of a Controversial Preamp 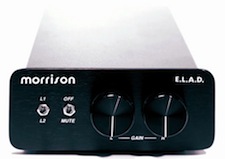 About a month ago I bought a Morrison E.L.A.D. preamp off Ebay. I've known Don Morrison for more than 30 years. I talked with him via phone when I was researching Stew Hegeman for a series of articles in The Absolute Sound. I was more familiar with his speakers, which are based on a Hegeman design, than his preamp. But when I saw an E.L.A.D. come up for auction I couldn't resist snapping it up.

A good part of my enthusiasm came after reading Peter Aczel's review on Don Morrison's website. Aczel heaped on praise, saying the E.L.A.D. was "utterly transparent" and "as close to 'a straight wire with gain' as we are likely to get." To an audiophile, that's the equivalent of waving a big red sheet in front of a bull. I really wanted to hear the E.L.A.D. for myself.

When the preamp arrived I was impressed by not only its internal layout, which was as neat and well-executed as any preamp I've seen regardless of price, but also it's ergonomics. The front controls consist of a mute on/off switch, a two-input toggle, and a pair of volume controls. That's it. And, that's really all you need. To turn on the preamp you merely plug it's power supply into the wall and attach the connector cable between the power supply and the preamp, wait a couple of minutes for the circuit to stabilize, (if you don't wait you may hear some faint low level noise while the servo circuit sets) and you're ready to do some serious listening. Even when the E.L.A.D on continuously the preamp and power supply barely get warm.

So how good is the E.L.A.D? While I wouldn't lay on quite as many superlatives as Mr. Aczel, the E.L.A.D. certainly rivals any active preamp I've auditioned on my desktop system. I don't feel it is quite as transparent as my Reference Line passive preamp, but the Morrison E.L.A.D makes up for that with it's greater dynamic contrast and additional bass response. The E.L.A.D is also exceptionally quiet and adds virtually no electronic grain or texture to the music. I was also surprised and impressed by its imaging specificity, which rivaled the Reference Line preamp.

Taken as a whole the $1299 (current price) Morrison E.L.A.D preamp ranks as an exceptional value that is perfectly suited for desktop preamp duties. Is it a virtual straight wire with gain?  Not quite, but it is a super performer at a price that even an audiophile on a tight budget can afford.