As longtime readers know, I rarely do equipment reviews on this site, but occasionally I come across something that doesn't fit into Home Theater Review or The Absolute Sound's purview. That is the case with the Audi Bravo V2 tube-based headphone amplifier ($65US MSRP).  I purchased my sample from Massdrop, for $57.99 during their most recent "drop." Just about the time I had forgotten about it, the box from Massdrop showed up at my door. 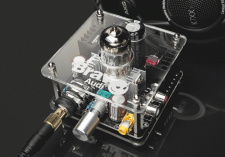 The V2 is 3 ¼" by 3 ¼" by 2". The largest filter cap and single 12AU7 tube stick up above its plexi top plate and when active, there's red LED behind the tube and a blue LED under the tube for a bit of drama. The V2's front (there is no front panel per say) has a centrally-located volume knob, a mini-stereo input, and a ¼" stereo headphone output. The back of the V2 has an on/off toggle switch and a connection for the powered wall-wart while the right side has an additional pair of RCA single-ended inputs.

The Bravo V2 can accept any tube from the 12AU7 / ECC82 family of tubes. My sample arrived with an unnamed, but new working 12AU7. The V2 operates in pure class A. If you touch either of the two small heat sinks near the rear of the unit after its been on for a while you will find them to be quite hot. The V2 offers 30 dB of gain (which is quite a lot), with 90 dB S/N ratio, and a dynamic range of 84.6 dBa at 300 ohms and 89.8 dBa at 33 ohms. The V2 is designed to handle higher output impedance, difficult to drive headphones, not highly efficient low-impedance models. Sure, it will work with sensitive earphones, but you will find the audio-tapered volume control (where there is far more rapid gain increase at the beginning of its range than the end) will require an extremely delicate touch to avoid excessive volume levels.

After spending several days with the Bravo V2, using primarily difficult to drive headphones, including the Beyer Dynamic DT-990 600-ohm version and the HiFIMan HE-1000 V2, I was delighted by its overall performance. Given its price and single-tube layout, I did not expect the V2 to be as resolving, dynamic, and harmonically uncolored as it turned out to be. I did cheat some - after a couple hours of listening I changed out the stock 12AU7 tube for a Gold Aero-sourced Telefunken smooth-plate NOS tube from my stash. Out of curiosity I checked to see what one of these would cost on EBAY. Prices ranged from $20US for a used Telefunken to $190 for a "new" Tele. No Gold Aeros were to be found, so I assume it's a pretty rare tube these days.

Even with the stock tube the Bravo V2 wasn't an especially "tube-like" in terms of harmonic balance. While the Gold Aero tube delivered a tighter, more extended, quicker bass response and none of the upper midrange glare of the original tube, both tubes exhibited the spatial characteristics that tubes are known for. Compared to the wonderful Schiit Magni 3 headphone amplifier, the Bravo V2 displayed a more dimensional soundstage and imaging, but the Magni 3 had better bass control and inner detail. If I was a budget-constrained headphone-based audiophile, the Magni and Bravo V2 might be my primary two headphone amplifiers. The Magni 3 would be for standard and low-impedance headphones while I'd use the V2 with high-impedance models. 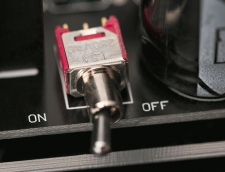 If this was a "full review" this is where I'd throw in a bunch of graphic examples of the Bravo V2's sonic prowess. But instead I'll reflect on who the Bravo amplifier would be ideal for - headphone listeners on their way up. For someone who has the funds for a top-echelon high-impedance headphone but lack the additional funds to purchase a headphone amplifier in a similar price range, the Bravo V2 (and the Schitt Magni 3) can deliver a more than decent listening experience that will allow an enthusiast to regroup their funds for that premium headphone amplifier push at a later date. During the interim, keen-eared listeners could even find that much of their desire for a much higher-priced alternative could dissipate to the point of happy-ever-after-ness, especially if they can tube-roll their way into a great tube for the Bravo V2.

The other ideal customer for the V2 is someone with a smartphone or lower-powered portable player that lacks enough power to push a high-impedance headphone to adequate volume levels when they want to listen at their desktop or at home. While the Onkyo DP1 is a wonderful player, it doesn't have quite enough push from its single-ended output to drive the two high-impedance headphones I mentioned earlier. Add the Bravo V2 to the signal chain and that issue vanishes. 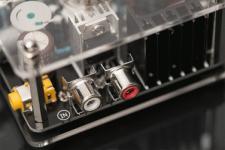 Does the Bravo V2 have any serious issues? Yes - sometimes, some purchasers have found their V2 units to be DOA. Mine exhibited some "teething clicks" during the first couple of hours of operation, but after that it settled down to be quiet. After being on continuously for several days no spurious noise interrupted the V2 background silence. If you get a deader, Amazon is well-versed in handling returns (even Massdrop can and will replace any units that fail during the warranty period.) The other issue is that the V2 is not as successful on medium and low-impedance headphones as it is with high-impedance ones. Sennheiser HD-600 and AKG K-7xx headphones were sort of meh with the Bravo V2, highlighting its upper midrange glare and inferior low bass extension (compared to the Magni 3).