The Luck of the XLR

In the last installment of this series, I told you that "There are a great many more strange and wonderful things to be said about XLR connectors. Assuming that I can keep coming-up with appropriate names for these articles, I'll tell you more of them next time and in the installments following." 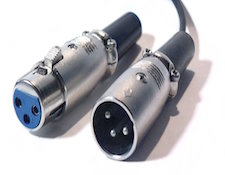 Well, here it is; next time, and it happens that this is the thirteenth episode (Quick; cross your fingers!) about weird stuff about cables and, although I'm not at all superstitious, I do lack either the restraint or the class to not take advantage of it. Now that I think of it, though, it really does seem that at least some element of luck must have been involved in the XLR connector's tremendous world-wide success.

For one thing, the original version of today's XLR connector, the Cannon "X", was designed for military use and as a replacement for the (originally German) DIN connector (DIN being the abbreviation for "Deutsches Institut für Normung" - the German Institute for Standardization). With that as the case,  American patriotism and the fact of World War II may very well have had something to do with its  near-universal postwar acceptance as the standard fitting for (with different total pin counts) several different audio and other applications, even despite the fact that the original "X" connector was just a "push" fit, and could, until it became the "XL" ("L" for locking) connector in 1950, just (as so many of us may have feared on at least some occasion) pull-out at precisely the wrong moment.

Another thing about the XLR connector where luck could play a major part -- at least in the three-pin configuration used for professional audio -- was in whether or not a stereo recording had any hope at all  of proper imaging and soundstaging. Until the passage of EIA Standard RS-297 in 1970 and its later revision to RS-297-A, there were two different ways to wire XLR connectors: the American and the European. Both used pin #1 for the shield, but American engineers and manufacturers used pin #3 as "hot" and pin #2 as "cold", and Europeans reversed that, making pin #2 "hot" and pin #3 "cold". As long as all of your equipment was wired the same way, ALL THE WAY THROUGH THE RECORDING/PLAYBACK CHAIN, it frankly didn't matter at all which configuration was used: Everything connected with XLRs  -- all of the microphones; all of the recorders; all of the mixers and equalizers or other signal processors; and even in many cases (before the advent of the speakON speaker connector) the monitors and/or playback speakers  would all be in the same phase and, except for issues of "absolute phase" (whether or not the phase of the pressure wave coming off the playback speaker at a given instant was of the same phase or phase angle as the pressure wave moving the diaphragm of the microphone at that same instant during the recording session), the recording would be "phase perfect", with no internal  cancellations, false augmentations, or other phase-related problems.

Starting in the 1960s, however, with the great popularity of Neumann and Telefunken microphones (the U-47 being the perfect example), and the great British and European invasion of not just new music, (the Beatles, the 'Stones, etc.), but also of new equipment for recording it (Neve mixing consoles, from Britain, first imported to the U.S. in 1968; Studer tape recorders from Switzerland, first imported in 1967, to eventually replace the American-made Ampex units which had, until then, been the world's standard; and on and on) the likelihood of phase-consistent recordings became progressively less as engineers mixed American and European equipment in their studios and didn't always either choose or remember to rewire the new gear to conform to the pin configurations of their older equipment.

Every time the wiring didn't match, of course, it shifted the phase of the signal by 180○, and there were plenty of times when that happened: Using American mics (RCA, Shure, Electro-Voice, Altec, etc.) with a euro-wired console would do it, as would the opposite; using Neumann, Telefunken, Sennheiser, AKG, or other European mics with an RCA, Studio Supply, or other American wired console. When the other great innovation of the time, multi-track recording, came along, the opportunity arose for truly classic screw-ups like mixing European and American microphones on the same track and getting cancellations and phase-shift artifacts trapped in the mix the couldn't be fixed by just flipping the polarity of either  the track or the entire recording. The same sort of thing could (and often did) occur when a differently-wired piece of outside gear (an equalizer, for example, or some other sort of signal processor - even a reverb device) was applied to one or more, but not all, of the tracks in the mix, that one (or those) track(s) could be out of phase with the rest of the recording, and it was possible that nothing could ever be done to fix it. The result, of course, even when using a mic'ing technique that supposedly eliminates phase effects, is a recording that - no matter what you do or what or how good of a system you play it on, will simply never image or soundstage properly. 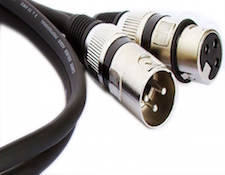 The "double standard" for XLR connector wiring was theoretically eliminated by EIA Standard RS 297-A, which established Pin #1 as "shield", pin #2 as "hot", and pin #3 as "cold", but there are still tens or hundreds of thousands of recordings that antedate it and can have been made with earlier or mixed standards. Even worse, as late as 1991, when I was writing an article on "Why some recordings can't image" for another publication, I contacted a very large and very famous recording studio equipment manufacturer and asked which standard they used for their gear - the American (Pin #3 hot) or the European (Pin#2 hot) and found - truly to my amazement - that some of their products were wired one way and some the other, depending on where they expected to sell the most units. And, as a capper, now, with the solid resurgence of analog and classic recording equipment, more and more older gear made before the "uniform" standard was established, is being resurrected and put back into service where, unless its internal wiring either initially conformed, or is now being re-done to conform to standard, it can do more damage and create more recordings that, no matter what you do or what you play them on, will never image.

There's still a lot more interesting and even peculiar stuff to tell about XLR connectors and their use. I'll write about some of it next time.