Recently, I wrote a piece for Audiophile Review that was something of an experiment for me, an exploration comparing a beloved recording in two different reissue media. That piece seems to have struck a nerve among readers, as within 24 hours of its posting it was shared more than more than 300 times (and counting) on a variety of social media platforms. 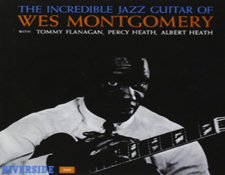 Since, clearly, you folks like this kind of cross examination I'm going to try another one.

From that same garage sale I discussed in the earlier article (which you can read by clicking here, if you missed it first time 'round), I also happened to pick up a vinyl pressing of the second album by the late great jazz guitarist Wes Montgomery. Like the Miles Davis album, this is a later pressing, probably from the late-'70s or into the 1980s (it is on a white Riverside label of that period).

Now, if you are like me and your first exposure to Wes was his later period recordings on A&M Records (produced by Creed Taylor) you need to put away any misconceptions you may have garnered along the way. Wes was (and still is) a very influential player but I suspect it's more for his earlier recordings on the Riverside Records label. This one, called The Incredible Jazz Guitar of Wes Montgomery, is a winner and a very different listening experience over the more mainstream flavored A&M albums (not that "mainstream" is a bad thing, but it is a different vibe).

This one finds the young Montgomery backed by a sizzling trio put together by the album's producers designed to push Wes' limits and introduce him to the New York jazz scene. So here we hear him backed by the great bassist Percy Heath (from the Modern Jazz Quartet) and his brother Albert Heath on drums. They are rounded out by legendary pianist Tommy Flanagan. 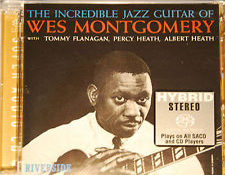 Anyhow, going back to the shootout, this challenge is in some ways a bit harder, yet at the same time easier. The differences are more clear-cut than on the Miles Davis album shootout. Most notably there isn't as much hiss on either of these recordings as there was on the Miles SACD (again, I don't view the presence of hiss as necessarily a bad thing). The LP sounds nice but compared to the SACD, it bears a noticeably different sonic footprint: there is plenty of high end and plucky bass there but the midrange bears a boxy sound, particularly notable on the piano.

This makes me wonder if this particular pressing might have been taken from a safety copy of the original tape (and then compressed further for the eventual LP remastering). On the LP, I can detect a bit of wow, flutter and other bits of distortion on Tommy Flanagan's big chordal piano, especially during tracks like "Mister Walker."

On the SACD, you can hear some hiss but overall the recording sounds much much more open and airy than the LP. The bass and midrange are much more distinct and natural sounding on this SACD.

So ... until I find another LP pressing to check out, the SACD is the clear winner! Really, there is no contest. So much of Wes' great chordal rhythm playing that locks in with the Heath brothers' groove is crunched down and lost in my LP version.

In fact, if my ears aren't deceiving me, I wonder if the LP might have been a copy off another LP (I hear some crackling at certain points that doesn't sound like it's due to dust or static, but more "in" the recording). 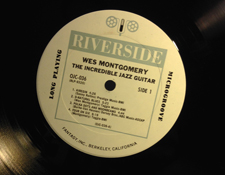 This of course makes me itchy to find another LP pressing to check out, maybe one of the Original Jazz Classics series or -- if I win the lottery -- one of the newer uber audiophile (and quite pricey) pressings. If I do get one I'll be sure to update this piece in the comments section and share it around on social media sites.

Until then, you'll probably be safe with the SACD if you find one that is reasonably priced.