This is a review about the new-ish album just reissued on Ominvore Records, from a group you probably haven't heard of before called TV Eyes, fronted by two guys from Jellyfish and the former drummer from Redd Kross and Air. 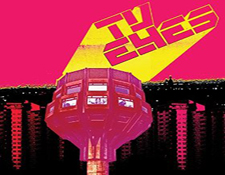 However, before I get to talking about their fine eponymous album, TV Eyes, a little lesson may be helpful in putting this album in historical perspective. You see, there is something of a grand tradition in the deep recesses of the entertainment business for artists to step outside of themselves and take on a new persona. Certainly among comic actors from Charlie Chaplin to Jim Carrey, assuming new roles is de riguer. Live Theater and Opera stars transform themselves nightly into other beings, from other times and places.

So it shouldn't be surprising to any of you to learn that in the music world there are similar parallels.

One of the first recordings like this -- which I learned about from an older business associate many years ago -- was made by two artists from well before my time in the 1950s who created a quite fun serio-comic sensation (in some circles at least) on LP that was far from their pristine Big Band / Pop roots. That album, called The Piano Artistry of Jonathan and Darlene Edwards, was an hysterical (ahem) tour de force (if you will) that was made for those in-the-know who could understand what they were doing. The novice only heard incredibly BAD music being played -- really, it was so bad that it was funny. And that was the point. Yet if you stopped to listen to it you heard two artists of such a high 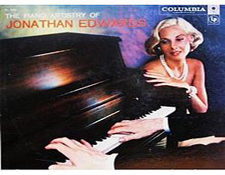 caliber who were in such control of their game that they were able to intentionally play off-key, almost drunkenly and singing intentionally out of tune. It's really quite remarkable. This was made in the days before digital processing software like Auto-Tune (which would've probably made something like this easy to fake in a studio). So, in real time, these two -- who were singer Jo Stafford and her husband, bandleader Paul Weston -- used to play like this for their celebrity friends at parties in Hollywood and it became so popular that it led to a recording contract with Columbia Records.

But that is comedy... And as fun as it its, TV Eyes isn't comedy, but it is a lesson in song craft and studio production detailing. More on that in a bit...

Let's consider for a moment the "what ifs" of the potential for artist to get outside their normal persona and become someone else if only for a little while. Some very famous people have attempted this sort of thing over the years, with mixed results, often brilliant.

Paul McCartney issued an album of easy listening music based on his 1971 rock album RAM under the guise of an imaginary conductor ala Lawrence Welk named Percy "Thrills" Thrillington (A pop rarity that has thankfully been reissued in the digital age).  Heck, the genesis of the landmark recording Sgt. Pepper's Lonely Hearts Club Band (by McCartney's original band, The Beatles, for those of you unfamiliar with it) was conceptualized as a way for the group to get out from under their "Fab Four" image that was strangling them; as Sgt. Pepper, they could (and did!) play most any sort of music so it can be argued that this precedent was set boldly in 1967. 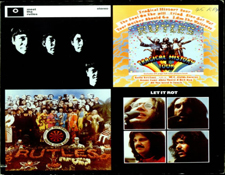 Ex-Bonzo Dog Do Dah Band musician Neil Innes helped steer some of his cohorts from Monty Python's Flying Circus through the brilliant Beatles parody group called The Rutles. Despite its comic roots, the recordings put out by The Rutles -- initially released as a soundtrack album on Warner Bros. records, a companion to the film All You Need is Cash -- were done at such a high caliber that even hard-core Beatle fans grew to love them.

Just last year I heard a DJ here in San Francisco spinning Rutles tunes before a set by The Flamin' Groovies!

In the early 1980s British "new wave" pop heroes XTC put out a six-song EP under the guise of The Dukes of Stratosphear. This psychedelic mini masterpiece was released with a video and clever promotional support and no mention of it being XTC! An imaginary group, their music aped the sounds of the mid and late 1960s so convincingly that it became a hit in its own right. But it did so on the power of the music -- it was pretty much hardcore fans who knew it was XTC but there was no mention of them on the cover.  They even assumed pseudonymous names -- such as Sir John Johns for main singer and songwriter Andy Partridge. No, The Dukes' EP -- called 25 O'Clock -- was so good that they put out a second full-length LP which further mined the depths of 60s pop, psychedelia and bubblegum, showing their influences ranging from the Hollies to The Byrds and even The Royal Guardsmen.  It was fun to play "spot the influence," of course, but quite honestly, the tunes on those records are so good that the albums have stood the test of time and fans play them to this day in their own right. There have even been deluxe edition box set reissues of those recordings (The Complete and Utter Dukes) which came out in 2009 complete with 180-gram vinyl, remastered CDs and special exclusive fun stuff (T-shirts! puzzles! 45s!).