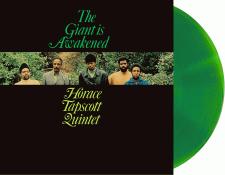 He was an important Los Angeles-based Jazz icon, some call him the Sun Ra of the West Coast, with his Pan Afrikan Peoples Arkestra.  He was revered by -- and an influence on -- many including saxophonist Arthur Blythe.  His recorded output seems largely relegated to live performances. His first studio release from 1969 has gone on to become a much sought after modern jazz rarity, some call it a classic: The Giant Is Awakened.

And... up until a few weeks ago, I had never heard of him or the album.

But that doesn't really bother me nor matter matter as there are a lot of musicians in jazz and other genre's I've never heard -- that, Dear Readers, is what makes music one of the most exciting life passions one can have!  I relish learning about new music and I am forever thankful for real brick and mortar retail music stores for turning me on to a multitude of musics I would have never heard of otherwise. In this case, I can thank Ben over at Tunnel Records here in San Francisco (who knows my jazz tastes pretty well) for recommending The Giant Is Awakened. 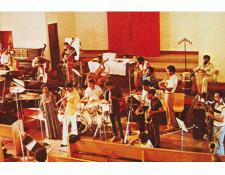 I guess I need to listen to NPR a bit more!

From the The Pan Afrikan Peoples Arkestra official website we learn that they are "a Black music ensemble founded in Los Angeles, in 1961, by pianist Horace Tapscott. Since the beginning the Ark has been dedicated to community, social consciousness, arts and Afrikan culture. The mission of the Ark is to preserve and present music from Black composers, dead or alive. To this date over 300 musicians have passed through the Ark, and that number continues to grow. Some notable members include: Michael Session, Kamasi Washington, Kamau Daaood, Dwight Trible, Phil Ranelin, Arthur Blythe, Adele Sebastian, Jesse Sharps, Nate Morgan and many more."

Curiously I picked up my first Kamasi Washington album recently and its pretty epic. I hope to review his music sometime soon. 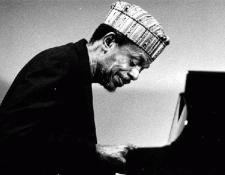 While writing this up, I did a few little informal (non scientific) "show of hands" polls on two Facebook groups in which I participate and awareness of Mr. Tapscott seems to be split between folks like me who are just getting familiar with his music and others who have been "in" on his scene for decades.  No doubt that those who had ties to Los Angeles where he was based were hep to him. In these days of the Internet, that vibe is clearly being broadcast to a wider, more engaged audience than even a regional jazz radio station might have hoped to reach back in the day. That is pretty cool when you stop to think about it. Indeed, the audience for Jazz these days is genuinely global and alive.

But one does have to wonder how did a record by such a somewhat-obscure-but-influential artist get so out of print to become a hotly desired collectors item?  Copies on record collecting website Popsike seem to have been going for upwards of $400 a disc, while on Discogs there are no original pressings to be found listed. 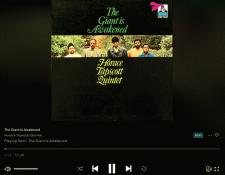 A quick check of the important resource Whosampled (dot com) may have revealed at least one source of the street buzz. Turns out that a Tapscott track was sampled by popular DJ remix artists MadLib in his song "Ornette" (click here to hear it). Curiously the track seems to also sample pianist Don Pullen who first came to public attention as part of Mingus' last great mid-70s ensemble, with a mad flourishing style similar to Tapscott's (but there doesn't appear to be any connection as far as I can tell thus far).

The thing about this album that I'm digging is that it is actually pretty accessible music. If you like John Coltrane's work from A Love Supreme onward as well as works by Charles Mingus and Don Pullen, you are probably going to dig this. 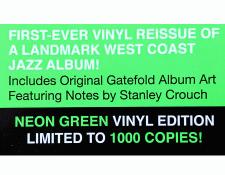 The Giant Is Awakened has grown on me significantly with each listen, especially the title track and "For Fats" which oddly enough feels like a Mingus-meets-Monk tribute in its own way. There are some tracks which seem to rely on repeating motifs that border on annoying but somehow they work. Its taken a few listens but I'm finding the heart of "The Dark Tree,"

This new limited edition run of 1,000 comes pressed on spiffy neon green colored standard weight vinyl that is quiet and well centered. The album was mastered from "high resolution sources" according to Real Gone Records, publishers of the album. Hopefully the used at least a 96 kHz, 24 bit source.  The Giant Is Awakened is streaming on Tidal (click here) and Qobuz (click here) in CD quality. The other cool thing is that there are many additional live recordings by Horace Tapscott and his various bands streaming up there so there is a lot of new music (for me at least) to explore!