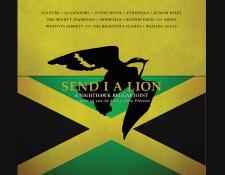 One of the great things about the new single CD and two LP compilation of music from Nighthawk Records is its remarkable unity as an end-to-end listening experience. Assembled by the original producer of the tracks included here - Leroy Jody Pierson - it stands to reason that there would be some consistency of sound on Send I A Lion: A Nighthawk Reggae Joint.

Nighthawk Records was formed in 1976 in Saint Louis with an eventual intention of documenting the music of numerous Reggae icons. Label co-founder Robert Schoenfeld passed away in 2006 and Omnivore Recordings recently acquired the label's catalog for reissue. 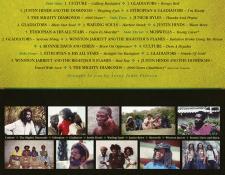 It is quite remarkable to hear such cohesiveness across 20 tracks from a diverse roster of artists including Gladiators, Ethiopian, Junior Byles, The Mighty Diamonds and many others. Together, you hear an underlying sense of community and purpose, so much so that these recordings almost sound as if they were made for the same album.

That upside also threatens to be a detriment to Send I A Lion: A Nighthawk Reggae Joint because there is always the risk of tracks starting to sound the same when placed back to back in a compilation like this. That happens sometimes with compilations of vintage Motown recordings for example. This is all the more reason that I find this collection is quite interesting -- and why it gets my thumb up! The producer clearly paid attention to the sequencing and balance of sounds here so it flows nicely as a full album listen and never gets repetitive or boring. 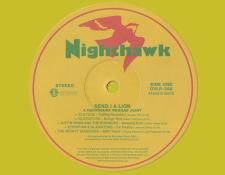 Some of my favorite tracks thus far include "Babylon Broke Dung me House" by Winston Jarrett and The Righteous Flames. Of course the great "4000 Years" by The Mighty Diamonds is wonderful. And, there is -- in addition to the original hit version -- a really amazing audition tape recording of the band doing that song basically unplugged. That alone is worth the price of admission to this set even if it was probably recorded on a portable cassette recorder or boombox. It is a cool moment to essentially hear the arguable birth moment of a song...

The CD version of Send I A Lion: A Nighthawk Reggae Joint is a great listen in the car. It also sounds basically very good at home (but not surprisingly sounds a little bright on the high end). I have not heard any harsh uncomfortable sonic edges however so don't be swayed if CDs are your jam. 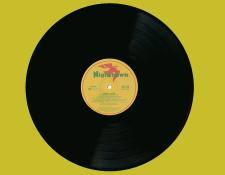 The two LP vinyl version, however, is the way to go if you want the richest listening experience as it plays everything back in a warmer, more inviting manner with a more pronounced low end in particular. Pressed at IRP, the vinyl is quiet and well centered. No problems there. Each disc comes in a protective audiophile grade plastic lined innersleeve.

Send I A Lion: A Nighthawk Reggae Joint is a welcome and very enjoyable addition to my collection. The reality is most of these artists here I was unfamiliar with prior to hearing this collection, so it is nice to have this sweet compilation to explore.

Yes Virginia, there is reggae after Bob Marley.