A fascinatingly curated new three CD collection out from Sony Music Latin called The Roots of Popular Music: The Ralph S. Peer Story connects some of the earliest Blues, Country-Western, Pop, Rock 'n' Roll, Jazz and Latin recordings back to one individual. Amazingly, all this diverse music combine into one compelling, contextual listening experience. The music presented here sounds remarkably good, especially when you consider that some of these recordings date from as far back as the 1920s and on up to present times (more on that in a bit...). 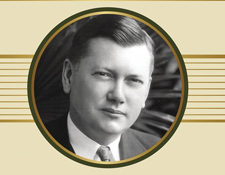 Some of you of course may be wondering just who is this Ralph S. Peer fellow? In short, he was a visionary A&R man -- born in 1892 and dying well before I was born in 1960 -- from the dawn of the music industry who eventually became a publishing giant behind some of the biggest stars of our times. To this day his company is one of the biggest global publishing entities, and it all started with this one man who had the vision to get behind great talents early on.  At a time when music created by people of African-American and Latin origin was not common and even frowned upon at times, he championed them. This was the fellow who recorded the first country song in 1921 and produced legendary 1927 recordings of The Carter Family and Jimmie Rodgers, music which some consider ground zero for country music as we know it today.

I found an interesting comment up on the Amazon link to this set which I will quote because I think it sums up this set nicely: "In the music contained here you will discover that great music and a great song endures time and even outlives every technological advancement, from the: Victrola, Radio, LP's, 8 track tapes, Cassette tapes, Compact Discs and the Digital revolution. Yes, after streaming and downloading are long gone, the music will still be here." 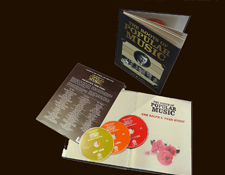 So this study of an overlooked once-footnote of the music industry comes to you wrapped up in a lovely hardcover book which does justice to this pioneering producer -- and ultimately -- big music fan. It takes you from Mamie Smith singing "Crazy Blues" in 1920 all the way up to more modern day pop stars like Mark Anthony and Lou Bega, yet all the way along it is connecting the dots, building up on one another contextually. You'll hear Dean Martin, Billie Holiday, Perez Prado, Elvis Presley, Willie Nelson, The Carter Family, Mario Lanza,  Johnny Cash and the great Buddy Holly! You'll even hear Bob Dylan croon "My Blue Eyed Jane," from a late 1990s tribute to Jimmie Rogers (I need to get this collection which I think I missed somehow!)

As a publisher, Peer was behind now classics like "Georgia on My Mind," "Stardust," "Blue Moon of Kentucky" and "Will The Circle Be Unbroken."  Consider, this detail from the official press release I received with this package from Sony: "Peermusic's catalog contains over a quarter of a million copyrights, including many by world-renowned artists in every genre, administered by 32 offices in 28 countries."

That, Dear Readers, is a pretty epic catalog and company! 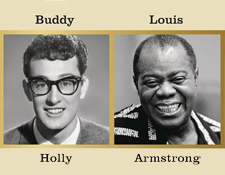 Of course, all this raises a question as to why a set like this is just happening now?  Well, turns out that this set is a companion to a 2015 book by author Barry Mazor called Ralph Peer and the Making of Popular Roots Music, a biography that inspired this collection's creation.  Every recording included on this set was either produced by Peer or is a copyright that he signed to his Peermusic publishing company.

Amazingly, there is a remarkable sense of sonic continuity on this three CD set, no doubt a tribute to engineer, restorationist and mastering wizard Paul Blakemore who has been behind notable sets on Duane Allman and Woody Guthrie. It sounds really good and is a consistent, enjoy able listen of very high quality, all things considered -- not something you would necessarily expect from an archival-type collection. While you won't find this listening experience up on Tidal or iTunes, frankly you'll want to get the full package as the book sized/styled package is of very high quality. It features lots of information on Peer and many fascinating photos of him with everyone from Walt Disney to Consuelo Velazquez, composer of the international pop standard "Besame Mucho" (a song recorded by so so many artists...  even The Beatles recorded it for their first demos for Decca Records!).

Listening to this set, you can hear the trickle-down of influence. For example, if you hadn't told me the song was by Tommy Johnson in 1928 I seriously would have thought that "Cool Drink Of Water Blues" was a lost demo by 1960s folk legend Tim Buckley.  Or consider The Memphis Jug Band's "Stealin' Stealin'" a song covered by pretty much everyone from the psychedelic rock period of the 1960s, from Jefferson Airplane/Hot Tuna guitarist Jorma Kaukonen to The Grateful Dead. 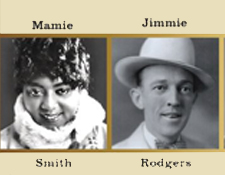 The many amazing Latin and Latin-flavored tracks just stagger: from Desi Arnaz's (yes, as in I Love Lucy) "El Cumbanchero" to Jose Alfredo Jimenez' "Tu Y Las Nubes." Jimenez, by the way, is one of the most influential Mexican composers and performers, whose music -- now considered standards, still performed by artists to this day -- was brilliantly interpreted by the legendary "ranchera" singer Chavela Vargas, herself the subject of a tremendous documentary out now too, btw (and where I first learned of his music, in case you are wondering).

The Roots of Popular Music: The Ralph S. Peer Story is a great gift idea for the music fan on your holiday gift giving list or simply if you want to understand how some of this music came to be in the first place. Ralph S Peer is a music hero for sure and, clearly, his influence lives on.