It's been too long since we've had a brand new, genuine, 100-proof, 100-percent authentic, real album by Squeeze, the acclaimed pop 'n rock band from England led by founder-songwriters Glenn Tilbrook and Chris Difford. Cradle to Grave came out late last year and I recently got my hands on the vinyl version which is just ducky. 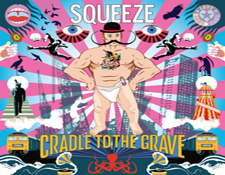 Well, it has been more than 15 years since their last album (and that wasn't exactly a big hit, the sadly overlooked Domino) so you are forgiven. I will especially cut some slack for those of you who came of age in the 1990s and beyond when Squeeze wasn't quite on the radio as much as they were in the '80s.

But, do get thee over to Ye Olde Wikipedia (or the Tube of You, for that matter) and educate thyself on one of the merriest bands of original tunesmiths to come out of the late 70s punk / new wave movement. Squeeze was/is up there right alongside Elvis Costello, Graham Parker, Rockpile, The Police, The Clash, XTC, Joe Jackson, Blondie, Television and The Ramones. In fact, if you combined all those bands into one, they might actually sound a little like Squeeze since this band has always been hard to pin down categories wise.

I never felt the that the early 80s positioning of them as new wave's Lennon and McCartney (which is how they were hyped back in the day for  a spell) was accurate or fair to the band. Squeeze is more than that (no offense to the the Fab Four). That said, if you were to toss in a dose of 1960s British Invasion psychedelic pop sensibility to the aforementioned Witches brew of bands, you'll have some idea of what to expect from Squeeze. 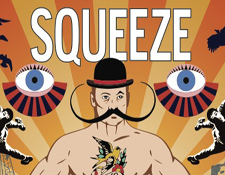 Just consider the bonus tracks on Side Four of the double LP vinyl version of Cradle to Grave which features live-in-the-studio renditions of otherwise unavailable performances including:  Lou Reed's  "Hangin' Around," Tom T. Hall's "Harper Valley PTA" (made famous by Jeannie C. Riley), "This Strange Effect" written by Ray Davies of The Kinks and Tom Waits' "I Don't Wanna Grow Up."

So, the new one, Cradle to Grave is a fun listen and -- dare I say it -- every bit as infectious as the band's early gems like ArgyBargy and East Side Story (granted, with the benefit of 30-plus years of further-developed songwriting prowess and a bit of time-earned maturity).

Some of the tracks are epic in nature, such as "Open" which features a glorious gospel choir. The lead single "Happy Days" is a classic bit of super sunshiny, driving melodic pop. "Sunny" is a quintessentially British piece featuring dueling cellos and synthesizer that reminds me at once of some of the Baroque-flavored pop miniatures created by Colin Blunstone of The Zombies on some of his early 70s solo records as well as late period recordings by The Move (and early ELO for that matter). The album opening title track features Ukulele and a driving Motown-Meets-Mr.-Blue-Sky beat coupled with an incredibly catchy earworm-of-a-chorus; there is even a brief instrumental break in this song that echoes a bit of the middle jam from Thunderclap Newman's "Something In The Air." 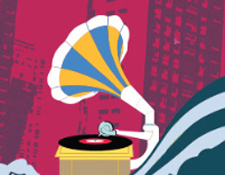 Musical touchstones in songwriting can be so great if done well, and this is just one of many clever moments you come across when listening to Squeeze.

Written for a BBC TV series of the same name, many of the songs on Cradle to Grave appear to be somewhat autobiographical in nature, lyrics wise. I am also reminded immediately of another once-made-for-BBC soundtrack album by The Kinks called Arthur (Or The Decline and Fall of the British Empire), issued in 1969. Fortunately for Squeeze, Cradle To Grave is already in production and on-the-air; The Kinks' show never got that far (due to budgets being pulled at the 11th hour). However, The Kinks' music from Arthur lives on, highly regarded among their best.

The vinyl pressing of Cradle To Grave is pretty much first class: thick, dark, mostly dead quiet and perfectly centered. With just four songs per side, the grooves have plenty of room to stretch out, delivering a nice clear modern but high fidelity sound. I have no idea if this album was recorded digitally or analog, but it sounds terrific even when you turn it up loud.

I could go on but you'd be better served by just getting the album or at least checking it out on your favorite streaming media service. It is also available on CD with slightly different variant cover art (pinks and blues instead of oranges and yellows).

If you like timeless pop music unconstrained by production gimmicks of any particular era (no autotune effects here, folks) you might well like Squeeze's Cradle To Grave.