The Pretty Things have gone down in rock and roll music history for numerous accomplishments -- such as being faves of the guys in Led Zeppelin, playing under the alias The Electric Banana and for technically writing the first rock opera that pre-dates even The Who's Tommy. However, apart from those of us in the know, few folks I know even among music collectors really remember these guys and what they sounded like. In fact, while I was a little kid growing up with two older brothers, I never once heard any of the music of The Pretty Things from them or their friends. 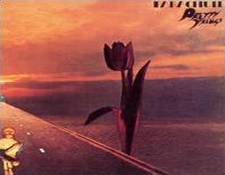 The only thing I remember were the cool ads for their album Silk Torpedo -- on Led Zeppelin's then-new Swan Song label -- appearing in Rolling Stone.

Me being me, my curiosity was raised by those ads and over the years I have picked up a number of The Pretty Things' albums, most of which I have liked enough to keep in my collection. I will however be brutally honest -- none of them have really "stuck" with me as far as particular songs jumping out at me causing an ear worm.

That is until my recent discovery of their 1970 opus called Parachute.

Produced at Abbey Road by the late great Norman Smith, Parachute is a wonderful slab of proto-progressive rock music that forms a quite remarkable link between the sounds of early Meddle-era Pink Floyd and The Beatles. Initially surprising, this makes quite a bit of sense given that Norman Smith worked with both the Floyd (including Ummagumma) and engineered about 100 of The Beatles songs!

So this record has a sound that is at once progressive yet maintains a solid pop sensibility. 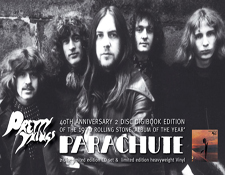 I'll put it this way, if you like newer bands like Tame Impala, Sweden's Dungen, The Flaming Lips, Sigur Ros and perhaps even Radiohead, then you may very well dig this album.

From the brief driving prog-rock-like opener "Scene One" to the dense harmony psych rock of "Rain," it is very clear that these guys were operating at a peak of creativity for this album.

The haunting plaintive "In The Square" has a chord progression that really really makes one wonder if the guys in Radiohead heard this while writing "Paranoid Android" (the descending acoustic guitar and sitar lines in particular).

Listening to this album and its dense multi-part harmonies also makes me wonder if Bowie was sending a little message to the band in his song "Oh You Pretty Things" (issued just a year after this release): "Oh you pretty things, don't you know you're driving your Mamas and Papas insane. 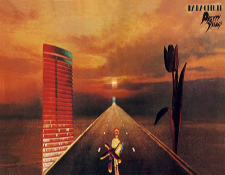 Hearing a track like "Cries from the Midnight Circus" I can finally hear why the folks in Led Zeppelin liked The Pretty Things These guys had that crucial blend of raw rock 'n roll roots credibility, coupled with a forward looking post-White Album Beatles eclectic sensibility and the ability to pull off sweet vocal harmonies this side of The Electric Light Orchestra and The Byrds -- "What's The Use" has a chiming Roger McGuinn-styled 12-string electric guitar part on it!

The final and title track, "Parachute," sounds like a lost outtake from The Beatles White Album and Abbey Road, a cross between "Sun King" and "Goodnight," blending mellotrons instead of strings, that lovely 12-string again and a really really very cool ending (probably early synthesizer) note that goes up into the stratosphere. At times listening to Parachute I closed my eyes and I felt like I might be listening to The Flaming Lips.

How does this album sound? Well, since I don't have an original pressing at present to compare it to, nor even a CD, I can't comment comparatively on the sonics. I will say that the album has a very distinct feel throughout it, a sort of muted sheen of sorts that lends a sense of consistency of sound from track to track. I say "muted" in that it is not a "bright" recording, yet the stereo separation is excellent and the highs and lows fairly distinct. Taken as a whole, it sounds warm and inviting even when you turn up the volume on your stereo loudly.

Its like a rich cup of cocoa spiked with some Kahlua or Coconut liquor. 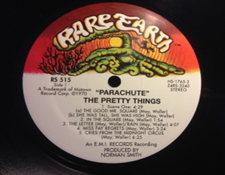 As reissues go, this one is pretty respectable. The vinyl is thick and well centered, relatively quiet and overall well pressed. For the $12 or so I got it for, I'm way more than pleased. Parachute is a very pretty thing, indeed.

I'll be looking out for the recent CD reissue of Parachute with bonus tracks and such. I will also try to track down an original UK pressing on the Harvest label. My inner obsessive record collector self always loves finding a new quest!