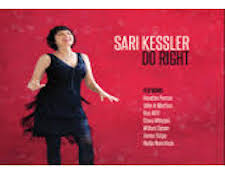 Born in New York, Sari Kessler is trained in both clinical psychology as well as music and acts as a jazz oriented singer, composer and arranger. Kessler credits Carmen McRae, Nina Simone and Ray Charles as her predominate influences. Despite her training in Pop and Soul, it was Grammy nominated Kate McGary who helped her find the path towards the rhythmic and harmonic aspects of jazz. Stylistically, a tangible correlation to Nina Simone might be found on the twelve tracks of jazz covers that comprise Do Right. On a larger scale, Kessler's works are composed of the Great American Songbook and her sound is mainly softer, traditional jazz. Some of the cuts include "Sunny," an often covered work written by Bobby Hebb, and also the Duke Ellington song, "The Gal From Joe's." Overall, this is simply a very well done, well performed, well recorded traditional jazz vocal work that is pleasing from first track to last. 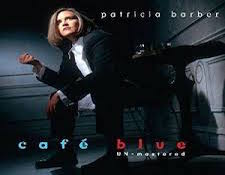 Musically, café blue is an exploration of that classic café / smoky jazz club in some basement lounge. There are twelve covers all portraying an interesting take on the softer side of jazz vocals. What I found most interesting, and the reason I included it for review, is that the listed catalog number is a Hybrid SACD / Dual Layer SACD / CD and most interestingly, un-mastered. All of the tracks were recorded as the original studio mix and not re-mastered for release. Gus Skinas of the Super Audio Center noted: "On this café blue, un-mastered and and in DSD, you feel the character of Capital's custom Neve board and you hear all the detail and space of those famous analog reverb chambers." I can say that from a recording standpoint, café blue is spectacular. The presentation is sonically triumphant. If your tastes lean towards traditional jazz, female vocal works, the music itself will catch your attention. The sonics will keep you coming back. 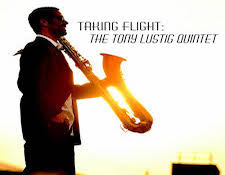 Sometimes fate is a fortunate friend. Having taken violin lessons since an early age, Tony Lustig found his school didn't offer a string section in the school band. Borrowing his older sister's long before abandoned alto saxophone, Lustig immediately knew that the sax was his instrument of choice. In Taking Flight, that fortunate circumstance takes off with abandon on the first track, "Change is Commin," a high octane, improv style traditional jazz work. All eight tracks of original compositions are centered in the traditional jazz genre. Lustig's goal for Taking Flight was to create eight "feel good" tracks that typified his vision of jazz.  He also wanted to create something that anyone who had never heard jazz before would find interesting. While each track to some degree exemplifies some minor if not dramatic difference, all within the jazz genre, this is a very enjoyable CD. Even if you might not be totally captivated by traditional jazz, Taking Flight does that just enough to be consistently listenable and entertaining. 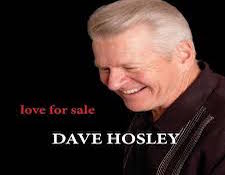 Dave Hosley has been a popular fixture in the San Francisco lounge scene for more than four decades. Oddly enough, Love For Sale is his first studio release. "Diamond Dave," as he is known to his fans, clearly earned his chops the hard way - through hard work in the trenches. I could not help getting the image of hearing this guy belting out tunes in a really cool Bay Area nightclub. Recorded at Berkley's famed Fantasy Studios, the ten covers include works by a diverse collection of artists such as Carole King, Billy Strayhorn, Irving Berlin and Burt Bacharach. His studio band is superb and is a typical collection of jazz artists. Backed by piano, Fender Rhodes, a complete horn section, a complex percussion section, bass and guitar, the music is exceptional in its own right. Add Hosely's easy, natural voice and the listener is treated to a very enjoyable listening session from a performer who impeccably knows how to both entertain a crowd, or one listener in front of their audio system.