The 1950s were a curious time of transition: one part relaxed relief, a reaction to the end of World War II and the promise of happier times and prosperity, and one part dread as the Korean War busted out. 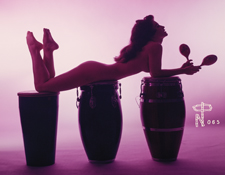 Two fine newly released super deluxe boxed CD sets explore musics related to these two sides of the fifties coin (if you will).

On the escapist side of things, Numero Group's new Technicolor Paradise is a fascinating study documenting the emergence of the loose genre of music known as Exotica. This music sometimes gets called (or lumped in with, depending upon your perspective) lounge or cocktail music (distilled jazz flavors) or even so called "space age bachelor pad" music. Lovingly broken out into three categories over three well stocked CDs -- "Daquiri Dirges," "Rhum Rhapsodies" and "Mai Tai Mambos" -- the amazing thing for this reviewer about Technicolor Paradise is how this music feels not too far removed from the surf music that would emerge in the early 1960s. In fact, some of the music on this set is indeed from the 1960s, underscoring the vitality of the genre : people bought up this stuff in droves.  Hangin' on to that Mid Century Modern dream!

Some of these pieces I've heard before (I think I have a few in my collection of 45s, actually). But most of them I hadn't -- there are a plethora (yes, plethora!) of obscure tracks here, folks. Some of my favorites include (on Disc 1, Daquiri Dirges): "Driftwood" by The Wailers which sounds sort of like Miles Davis noodling on a two chord outtake from Sketches From Spain backed by a vibrato-heavy surf guitarist and a tinkling cocktail lounge pianist.  The surf-from-the-desert flavor catches a wave on The Gems' "Slave Girl" and Jerry and The Catalinas' "The Arabian Knight" (the latter replete with early Beatle-esque sha-la-las!). 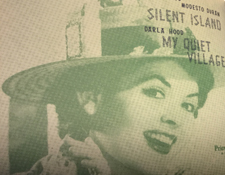 Disc 2 (Rhum Rhapsodies) has some jaw droppers including "Silent Island" (and "My Quiet Village") sung by none other than original Our Gang member, Darla Hood (!), sounding like she's trying to emulate Judy Garland (but ultimately coming off not quite like Liza...). The trio of Voodoo themed songs is sort of stunning as a mini set-within-a-set in its own right: the over-the-top "Voodoo Drums" by Akim is followed by the cheese-schmaltz of "Magic Voodoo Moon" by Fred Darian and then Don Sargent's insipidly satisfying "Voodoo Kiss" wraps things up swimmingly (imagine a heavily reverb-drenched young Neil Sedaka-flavored singer wooing a sexy tune of seduction backed by bongos with harmonica solos).

The Five Glow Tones version of "Quiet Village" which kicks off Disc Three (Mai Tai Mambos) sounds  like what might happen if The High Llamas went out drinking Manhattans (that is until a vocal group akin to The Jordainaires show up sing choral "ahhhs"!).   Bobby Christian's groovy surf-guitar-with-bongos-meets-Yma-Sumac-styled version of Duke Ellington's "Caravan" feels like something Joe Jackson might have tried around the time of his Night and Day album in 1982 (and I mean this in the best possible way). "Jazz in Port Said" by Eddie Kochak and Hakki Obidia is another gem, blending groovy Middle Eastern sounds with swinging jazz. 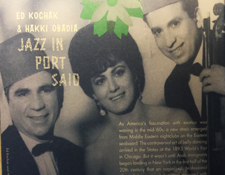 And it all Technicolor Paradise sounds really quite good and remarkably consistent across the 54 tracks (from probably as many labels, some lower budget one offs).  And the other key thing to consider about this set is not just the music but the curation within: the enclosed hard cover book offers great insight into the genre (I am still working my way through it!).  While this set isn't on Tidal, there you can find related releases by the likes of Martin Denny and Les Baxter, both pioneers of the genre. Technicolor Paradise is a fun and cool collection -- it's really nice to finally have a well curated deep collection of Exotica. Hours of fun listening while sipping dirty Martinis ...

In my next review we'll look at The Bear Family collection exploring the Korean War and the music surrounding it.  Equally fascinating, that set provides a snapshot of the underlying sentiment of the period, a very different perspective on the times than this set.