I got a "new" Pat Metheny album the other day... 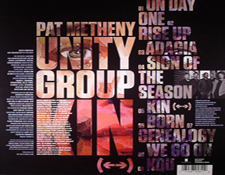 I almost considered this "new" Pat Metheny album as a sequel to his (I think) classic 1992 release Secret Story. But as I got deeper into it, I realized that Kin (<-->), recorded with his Grammy Award winning Unity Group, is really its own thing... more on that in a bit...

I also realized as I started my review that the "new" album I bought new directly from Pat Metheny's record label, Nonsuch Records, was not exactly new... but that doesn't make it any less great....

You see, I had recently ordered the album from Nonsuch via a special 24-hour email promotion, offered at such a tremendous discount that it was a no brainer I'd have been foolish to pass up. The two LP set -- on nice dead quiet, perfectly centered 140-gram vinyl pressed at the prestigious Pallas plant in Germany -- with CD enclosed (and MP3 download) was offered at half price...

So with shipping the whole package was just $18.59.

And since this special deal came to me in 2016, I just assumed it was a promotion for a brand new album. So imagine my surprise when I found out that Kin (<-->) was made in 2014.

This, my friends, is called savvy marketing and it does lead to an issue some reviewers face... if I might side track us a bit before getting down to the actual review... 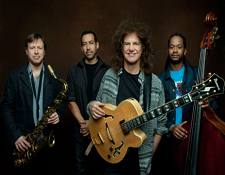 Ultimately, the time-stamping date of when the album was first issued didn't matter to me. If this album was appearing to me as "new" -- and I am pretty solid longtime Metheny fan since the late 70s when I first heard him live on a radio broadcast from Long Island -- then it might well be new and news worthy for others as well.

Thus I am reviewing it here... because it is worthy, regardless of the date it was issued.

However, please believe me when I tell you that there are many reviewers out there who would not even consider reviewing an album like this just because of the date listed on the album cover. Even if they liked it. I have encountered this challenge when promoting my own music. I have even been told some heartbreaking stories from frustrated music publicists over the years, trying to do a good job for their clients but who have had potential reviews cast aside due to some antiquated industry protocols (retail, touring, advertising time related pressures).

This all because it is not perceived to be "new," thus some reviewers are not allowed to -- or simply choose not to -- review it. Because it is not the flavor of the moment...

To that I say poppycock!

(This may be the first time I've used the word poppycock in a review, folks) 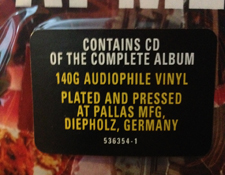 But seriously.... those reviewers are missing out on a whole lot of fabulous music! Music that apparently won the Best Jazz Album of the year award from Downbeat Magazine's reader's poll!

The rest of us who missed it -- and perhaps we are just occasional Metheny listeners after all -- will find much comfort listening to this recording as many of Pat's signature sonic trademarks are present and accounted for:  the signature phase-shifty, reverb/delay-infused electric guitar sounds... the epic compositions combining elements of jazz, rock, world, ambient, new age, classical, avante-garde and other musics... the exotic instrumentation and perhaps most importantly, the passionate performances and great melodies which take the listener on a journey.

Like much of Pat Metheny's best offerings, this new music on  Kin (<-->) has a lovely sense of grace and air surrounding it. Plus the ever important sense of surprise...

The more advanced Metheny listener will hear subtle twists Pat has added to his (if you will) formula. For example, I notice a number of unexpected and highly compelling Zappa-esque side journeys amidst some songs, moments of exciting diversion that can change up the vibe for an instant only to return you back to the groove at hand in the blink of an eye. Its almost like if you are mesmerized looking out the window of a plane when the person next to you starts a conversation about fine wines -- which you gracefully acknowledge before turning your head back to viewing the spectacular images out soaring by your window. 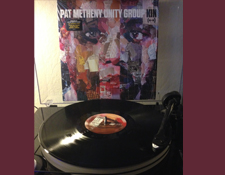 Perhaps --  and I'm just guessing here as I've not really had time to compare/contrast -- Pat was inspired by the success of the compositions for his 2013's Orchestrion project (which I reviewed here) with its fabulous live/computer controlled super-complex-but-wonderfully percolating performances.

That all this music could be created by a five-piece band is all the more impressive. That is what happens when your band is full of incredible multi-instrumentalists. Consider Chris Potter who plays tenor and soprano sax, bass and regular clarinet, bass and alto flute.  Giulio Carmassi is even more diverse, playing piano, trumpet, trombone, french horn, cello, vibraphone, clarinet, flute, recorder, alto sax, wurlitzer, whistling and even some vocals!

I must also call attention to the presence of long time Metheny collaborator and original Pat Metheny Group bassist Steve Rodby as Associate Producer as I'm sure he helped shape the sound of this album.

Metheny's Kin (<-->) is one you should check out. You can listen to it on many levels -- as a serving of Metheny "comfort food" you know and love, or as a breathtaking journey through tone colors, sparkling aural vistas, gorgeous melodies and always remarkable musicianship.

(apologies for the avoidable bad pun)

Now, I have to go back and check out the original Unity Band album from 2012 which I completely missed as well.

New music is alive and well folks. It just takes a little poking around to find it... or a friendly nudge from the record label.

Thanks Nonsuch Records, for the special promotion and the timely reminder.