One of the most interesting periods of Frank Zappa's career is frequently his most overlooked. This is the time right after his tragic, near life threatening accident (where a crazed fan pushed him off the stage) but before he assembled the next great incarnation of his Mothers of Invention (ie. the so called "Roxy" era band). 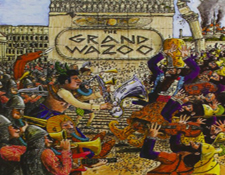 Betwixt and between -- roughly the year of 1972 -- Zappa recorded two albums and assembled two incarnations of a new type of big band which he toured very briefly.  Pretty amazing for a man who (according to the wiki) "suffered serious fractures, head trauma and injuries to his back, leg, and neck, as well as a crushed larynx."

So brief was this tour that in all my years of talking with Zappa fans -- I started listening to him in ernest when I was in the 7th grade, so its been a long time now -- I have only met one person who actually saw one of these legendarily obscure concerts (Hi Bob!). 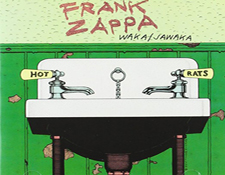 First up are the two studio releases Zappa put out in 1972:  The Grand Wazoo and Wakajawaka.  Both albums are high on instrumental prowess and low on comic relief, so be forewarned all you fans of the more "jokey" Zappa material. Fear not, there is plenty of weird wonderment in these recordings, but in general, these are albums with lovely long form jams that grow and take the listeners on a different type of listening journey.

Its a freakin' orchestra, man!

And man, could those cats jam! On Wakajawaka, "Big Swifty" took up a whole album side back in the day. The title tracks to both albums took up almost as much real estate and those properties have only gone up in value. That lush, fat horn section soared over compelling counterpoint, taking fascinating twists and turns which make these records as important and valuable a listen as Zappa's other jazz-rock landmark release, Hot Rats (from 1969).

Compared to the original pressings (which I own), these CDs sound quite good with nice clarity courtesy of careful remastering in 2012 by Doug Sax his team at The Mastering Lab. For those of us into the nitty gritty details, I was pleased to find specifics on the "food chain" used to remaster this album in the CD's liner notes (ie. DSD signal path, Ampex ATR 102, Meitner-Mark II A/D converter, Sonoma Digital Workstation, etc.) 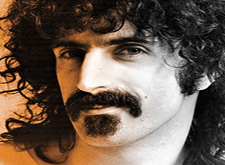 Comparing the CD to an original Bizarre Records LP pressing I own, the LP wins on the side of overall warmth and presence, but the CD does sound quite good as CDs go. Yes, there are some of the expected artifacts inherent to the CD format, so periodically you may notice a cymbal sounding a little swishier than the original LP. And there is that over all crisp edge which becomes more apparent as you turn up the volume on your stereo (especially in the mid ranges).  But relative to other CDs I've heard over years, this one sounds pretty sweet all things considered.

Onto the music... the title track of Wakajawaka is one of my favorite Zappa songs ever.

The wonderful poke at the emerging Southern Rock genre on "It Might Just Be A One Shot Deal" sounds quite fabulous, only getting momentarily harsh at the transition point at the weird vocal break down into the jam.

Actually, if I might take a little topical detour, working on this review prompted me to look up the lyrics to the song on the fab Zappa-fan made-and-maintained WikiJawaka (thank you, Interwebs) as it is one of those songs where its super hard to make out what Zappa is actually singing about. And, well, if the lyrics I found on the web are accurate, this seems to be something of a warning song  -- perhaps to other musicians -- many of whom were finding themselves getting set up for drug busts at the time.

So thus the story, which reads like a sort of drunken fairy tale (including a Frog as a central evil character), has an important point to make:  "... keep an eye on that frog" ! 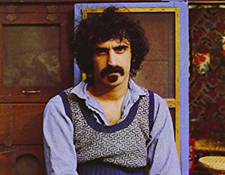 It's very cool to clarify this after all these years, especially since Frank was staunchly anti-drug; but I'm sure he also didn't like seeing other musicians he respected getting set up by the authorities of the times -- he'd been set up early on in his career in other ways.  Stuff was going down, kids...

Anyhow, back to the music, this CD is very enjoyable. Its a respectable representation of the music and certainly -- especially for the new Zappa collector -- an affordable way to explore this album. I'm happy to have it now so I can play Wakajawka in the car  or wherever I might want to take this music on the go; as Zappa records go, Wakajawaka makes for great driving music!