Ok, all you Beatlemaniacs, Dead Heads, Dylan freaks and Springsteen fanatics out there... Yeah, I'm talking to you there.... you with your hundreds of hours of live music on your hard drive and a closet full of old cassettes...

I got something in hand that you probably don't have yet: A live concert by Andrew Gold and it rocks! 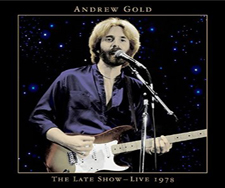 Ok, so readers of a certain era will know Andrew Gold's music because he had some bit Top 40 hits on the radio in the late 70s and one of his songs became the theme song to one of the most popular TV sitcoms of the 1980s into the '90s.

Mr. Gold, the son of legendary voiceover artist Marni Nixon  -- the singing "voice" for Natalie Wood in the 1961 film West Side Story and Audrey Hepburn in the 1964 film version of My Fair Lady -- became a respected studio / session player himself in the 1970s. He played extensively with Linda Ronstadt in particular, serving also as her arranger for many years on some of her biggest selling recordings.

As a solo artist, I'm willing to guess that most of us back in the day only knew his hit singles, "Lonely Boy" and the now-iconic "Thank You For Being A Friend" (the aforementioned TV sitcom theme song, used in The Golden Girls).  Songs that were on pop radio a whole bunch for a period in time.  And if you were like me, you lost touch with Gold and his music until we sadly learned that he'd passed away several years ago, way too young.

So, here we are down the road a piece and the good folks at Omnivore Records have just issued a live CD capturing the last show of the last night of Andrew Gold's 1978 tour at The Roxy in Los Angeles.  Simply titled The Late Show - Live 1978, this has been such a surprisingly fun listening experience for me, I now want to check out Andrew Gold's studio records again.

I will admit that back in the '80s and '90s when I picked up some of Andrew's solo albums (which were common cut-outs - overstocked LPs sold at reduced prices for those of you who who weren't going to record stores back then) they left me kinda flat. Maybe it was the late 70s production style that felt weak to my ear somehow, I don't know. The records didn't stick to my ribs and I eventually gave them to a friend who was a fan who needed upgrades for her collection. 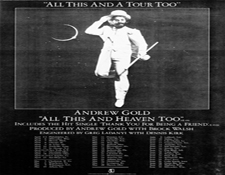 In contrast, on this live show I'm hearing a great performer playing great songs supported by a great band before a great audience. There is a balls-to-the-wall rock vibe here that is palpable; the band is LA-slick but in a good way; this is a band playing with all cylinders firing, a audible comfort level as a unit that can only come from being on the road for weeks at a time.

Live, Andrew Gold's sound falls somewhere between Jackson Browne and Warren Zevon with a bit more Beatle-influence apparent, something I never picked up on when listening to his studio records.

At times it sounds like you are listening to a somewhat more complex, tighter twist on Badfinger.  I'm not just talking about the fact that they cover The Beatles' "Dr. Robert" but more of the construction of the songs with lots of cool little major-to-minor chord change ups and harmony choices that are, well, very Beatle-esque.

Add the that fact that Gold was an extremely accomplished guitarist -- something I also hadn't picked up on before, his solos and guitar tone at times recalling Glam-era axmen like Mick Ronson, Mick Ralphs and Ariel Bender -- and you have a compelling, heady brew that warrants some attention. The three guitarists in this live band create a nice fat wall-of-sound.

Overall this CD sounds solid, especially as live concert recordings go. Actually, it sounds fantastic in the car with a big round sound that makes you want to open up the windows and let the world rock along with you to the now-guilty-pleasure that is "Thank You For Being A Friend." Come on, you just know you want to drive around town with the windows down, crankin' this smokin' version of the theme to The Golden Girls.

Its what all the cool kids are doing... 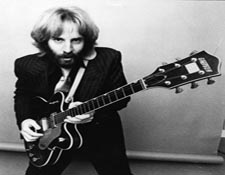 But seriously, this concert is a fun spin. Listening to the concert on my home stereo it sounds overall pretty good but the colder sound of the CD is much more apparent there than in the car -- I wouldn't be surprised if this album was mixed with mobile listening in mind (yeah, folks, there are some records out there that are designed for on-the-go listening).  This isn't a bad thing necessarily but I'm trying to help set realistic expectations.  It sounds certainly in league with or even better than the best of FM broadcasts from back in the day, such as you might have heard on the King Bisquit Flower Hour.

It is what it is and I, for one, am glad to have this little gem documenting another time and place for the ages.

One of the great things about reissues and archival releases like this is the benefit of 20/20 hindsight.  Today I can listen to The Late Show - Live 1978 with clear ears, devoid of the competing noise that was the late 70s music scene -- an extremely fertile period where there was a lot of great and divergent music happening, from prog to punk rock and beyond.

As a more mature listener now, I can appreciate what Mr. Gold was doing back then, without caring one bit about how he looked, who his fans were or even that the guy's biggest hits were slices of the purest sweet pop.

Put your preconceived notions to bed.

"Lonely Boy" is a great tune and he rocks it supremely on this live CD.  I really like a bunch of the songs that have the strong Beatle / Badfinger influences such as "Hope You Feel Good" and "Go Back Home Again." "How Can This Be Love" sounds like it was written for The Captain and Tennille -- I mean that in the best possible way.

His cover of "Dr. Robert" is a spot on perfect.  Honestly, when was the last time you heard any band, outside of perhaps some Beatle tribute group, pull off a cover of "Dr. Robert?" I don't think Paul McCartney has even played that song live with his current (and outstanding) band!

If this album was released back in the day I suspect fickle young fans like me might have had a different impression of what the guy was really about.

I'm going to start picking up Andrew Gold's studio albums again to check out.  I suspect there are some golden gems tucked away there.