Across the past several years I've been exploring the music by an acoustic stringed instrument player named Glenn Jones. First discovered in a most roundabout manner -- I found one of his albums at a garage sale, with its charming turn-of-the-century cartoon animal-musician artwork culled from antique postcards, recommended to me by the seller -- I've since been systematically collecting Mr. Jones' wonderful recordings whenever I find them. In short, if you are into the acoustic musics of Leo Kottke, John Fahey, Jorma Kaukonen and Adrian Legg, you might well enjoy Glenn Jones' works. 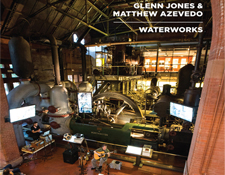 A recent album on Thrilljockey Records of his which I purchased at Amoeba Music -- created with longtime collaborator Matthew Azevedo -- is called Waterworks and its a recording which some of you, Dear Readers of Audiophilereview, might enjoy because it was designed around a live performance space, aiming to capture a more three dimensional perspective on the music. Recorded binaurally (and designed for loud play on a high quality sound system) in Boston's Waterworks Museum, the music was performed through a custom multi-speaker array -- Jones plays guitars and banjo while Azevedo performs on synthesizer, harmonium, soundscapes and signal processing.

From the Thrilljockey website: "Waterworks captures Glenn Jones at the forefront of modern solo guitar playing. Combining a highly skilled fingerpicked style with mesmeric tunings and custom-crafted partial capos, Jones delivers an array of lyrical compositions that quietly regale past adventures and personal reflections with masterful proficiency. The Waterworks' Great Engine Hall - depicted in the album artwork - is a unique setting for Glenn Jones' intimate vignettes. Its lofty redbrick columns and vaulted ceiling makes for an intensely resonant space, whilst further acoustic considerations had to be made for the large amount of reflective machinery stationed in the room. Sumptuous glissandi seem to drip from every cavernous corner, whilst rhythmic bass lines gainfully slip across brass, steel and stone. Put on record, it makes for a consuming stereo experience." 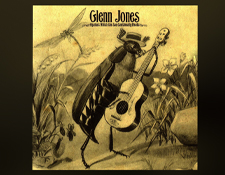 From the liner notes, Glenn writes: "To overcome the echoiness of the space, Matt ran the acoustic guitars and banjo through 12 speakers arranged in a centrally located dodecahedron-shaped speaker enclosure mounted on a tall stand.... Though everything I played acoustically would be amped up and projected (untreated) through my 12-speaker set up, Matt also ran a line from my mic to his computer and soundboard where he treated my dry signal electronically, using it as a springboard to generate sounds he could move stereophonically throughout the space, sometimes creating two distinct lines which ran clockwise, counter-clockwise or in both directions at once, and at any speed."

When I read this, I wondered to myself: wow, why hasn't this been issued some sort of surround sound platform on a high resolution medium like Pure Audio Blu-ray Disc?

The album was recorded live before an audience by Ernst Karel using a binaural "artificial head-and-torso simulator" dummy head  (again, quoting from liner notes)"equipped with ear canals that contain small microphones... designed to make recordings that closely approximate the way we hear sound in space."  Jones goes on to explain how a number of notable albums were made in this manner using the dummy head including recordings by Can, Tangerine Dream and Lou Reed (I have a couple by the latter, including one of my all time favorites, Street Hassle). 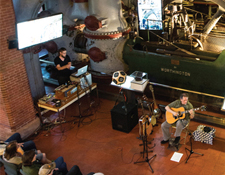 As promised in the liner notes, Waterworks is a rich listen.  I really liked the rolling warmth of "Portrait of Basho as a Young Dragon" which seems to include a treated harmonium. "Mother's Day" delivers on the enormous reverberation opportunity of the Waterworks as a performance space, yet the recording remains remarkably clear and detailed. If you've ever heard any of Jorma Kaukonen's solo recordings from the mid-late 1970s, you may well appreciate this album -- take Jorma's sound from that period and place it carefully in massive space and you will get an idea of what to expect. This is not at all sloppy either. Like Bill Frisell, whom I have seen live performing in an enormous space (at Grace Cathedral here in San Francisco, in fact), all of the notes played and echoes traversed are clearly well thought-through and carefully timed, designed to play off of one another.

On the vinyl release issued by Thrilljockey Records, the music sounds remarkably natural despite the sometimes rather trippy treatments. I suspect this is a modern digital multi-channel recording but that is not necessarily a bad thing as it seems to have been made with much love and care. The noise floor on the thick, dark black, well-centered vinyl record is super quiet so this music sounds quite fantastic. It also comes with a bright, good sounding 320 kbps MP3 download for mobile listening (it is what it is, but there were no big red flags hitting my ears on a cursory listen). 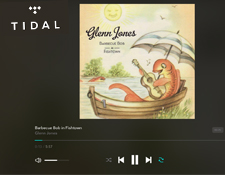 True to the "Play LOUD" suggestion on the back of the LP Waterworks does sound quite massive, filling the room with lush acoustic guitar and banjo musics complemented by sound effects of "waterfalls, children playing, crows squawking, insects chirping and more."  In fact, its that sort of nature sound field which closes out the record for several minutes as the audience filters out -- the effect is quite mesmerizing, seemingly taking over the room.

For you streaming music fans, Waterworks unfortunately isn't available on Tidal. However, several of Glenn's other fine albums are up there streaming in CD quality including the first one I picked up at that garage sale way back when, Barbeque Bob In Fishtown. You can jump to that album by clicking here.  I am also checking out some others of his back catalog which I don't own yet so Tidal again struts its muscles as a handy tool for exploring new music one may wish to eventually buy in a physical and/or higher resolution form. Right now I'm playing Glenn's 2007 release Against Which The Sea Continually Beats, a quintessentially fine listening experience (click here to get there on Tidal).

Glenn Jones' music is really good folks -- fine sounds one can enjoy on several levels, both as an audiophile and simply as a fan of masterful acoustic music.