These reissues have been long overdue... 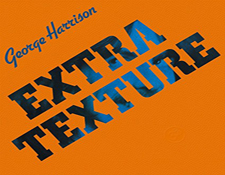 George Harrison's 1976 opus 33 & 1/3 has long been a fave of some Harrison fans, it marking a return to form (if you will pardon the cliche) after a few somewhat somber records in the period post-All Things Must Pass.  You can go to the Wiki to read about the rollercoaster George was on prior to the making of this album, from the break up of The Beatles to a plagiarism lawsuit and more (yikes!).

Despite the sunnier vibe of 33 & 1/3 and the fun singles it yielded -- I am pretty sure I remember seeing a promo film for "Crackerbox Palace" (directed by Monty Python's Eric Idle!) on Saturday Night Live around the time, perhaps the same night when Harrison appeared on the fledgling TV show alongside Paul Simon -- this album always had a somewhat murky sound to it.

I remember thinking it was muddy sounding when I bought it new back in 1976. It was not a particularly punchy mix, yet I do love the album -- at the end of the day, it is about the music!  The sound of this recording may be the result of where George recorded the basic tracks (at his home studio in England) or perhaps the general sound of mid-70s mainstream pop rock -- there were a lot of records from this period that had this sort of mid-range-y, almost muted, singer-songwriter flavored sound. It was a relatively small society of recordings from that period which really sounded great in an audiophile sense (Paul Simon's Still Crazy After All These Years comes to mind as well as most of Joni Mitchell's jazzier records from the time period such as Don Juan's Reckless Daughter and Hejira... Steely Dan's Royal Scam was a good one too).

Great songwriting can make up for a multitude of production sins... 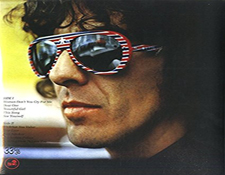 That said, the new reissue of 33 & 1/3 comes to you on thick, well pressed 180-gram black vinyl LPs made in Germany and it sounds a lot better than a UK pressing I have of the album from back in the day.  The new mastering is brighter and more open, revealing more of the music within and just making it that much more enjoyable to listen to. It still sounds like 33 & 1/3 -- without remixing it or doing wildly aggressive remastering, you can't really change the basic sound of the record -- but this new version seems more dynamic.

My only nit is that my pressing isn't perfectly centered which results in some wavering of the sound of songs at the end of the sides, such as "See Yourself" --  in defense of the reissue, however, most of the pressings of this album I have ever had over the years have had a similar issue; some things, I guess, you can't win.  Fortunately, on side two, "Learning How to Love You" fares better and sounds great, rich and warm with that lush Smokey Robinson-meets-Al-Green smooth soul sound Harrison was exploring (also heard on "Pure Smokey," his tribute to the man himself). 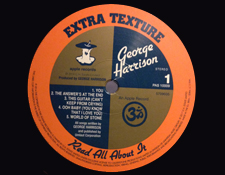 In contrast, George's generally ignored 1975 album Extra Texture was his last with Apple Records and I suspect a lot of people dismissed it after the debacle that was 1974's Dark Horse. The album went Gold quickly according to the Wiki but generally, as I remember it, most of my friends-who-were-Beatle-fans were not super into it. Bruce Springsteen was off and running with Born to Run, Wings were soaring, Prog Rock was huge and Punk Rock was starting to raise its fevered head.  So, its sort of understandable how this album might have been overlooked.

Personally, back in the day I was immediately receptive to Extra Texture, with its cheery bright orange cover and somewhat updated Beatle-flavored sounds.  The new reissue is a wonder as it recreates the original stippled textured cover design complete with the die cut lettering (be sure to put your copy in a protective plastic sleeve immediately so as to not damage the cover when putting it in your teen-aged collection, kids!).

Perhaps it is time for a more thoughtful and objective look back on Extra Texture.  The opening track "You" was apparently (if the Wiki is accurate) originally produced in 1971 by Phil Spector so right off the bat you know it was going to have a bigger sound going on there. No wonder I always liked this song which sounded like classic Harrison then, and it still does now. I really don't understand some of the criticism foisted up on this album  as the songs and performances seem just great and very strong. "The Answer's At The End," "This Guitar (Can't Keep From Crying), 'Tired of Midnight Blue" are all great Harrison tunes, songs that would not have been out place on albums like All Things Must Pass or Living in the Material World.

This new reissue from Universal Music was also pressed in Germany on heavy 180-gram vinyl which is dead quiet.  Extra Texture generally sounded better than 33 & 1/3, so the difference between this new pressing and the original is perhaps not as dramatic, but there is still a nice balance of warm and bright textures (if you will) on this remaster. You especially feel this on some of Jim Keltner's kick drum and tom tom hits, which are more distinct on this pressing, especially on tracks like "The Answer's At The End." The string sections really pop on that song in comparison to the original pressing which loses some of that detail in the noise floor of the mid-70s noisy last-album-from-Apple domestic US vinyl. 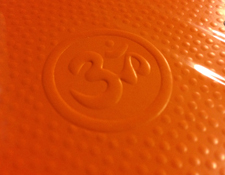 There is a nice sense of studio air around Keltner's drums on "This Guitar (Can't Keep From Crying)," a song which sounds surprisingly rich given that Harrison plays bass on an Arp synthesizer instead of an actual bass guitar.  Even a song like "His Name Is Legs (Ladies & Gentlemen)" benefit nicely from the remastering, with a clearer sense of the funky breaks the band is making there

All in all these reissues are of a very high quality that audiophiles and Beatle collectors can be comfortable with buying. They sound great. And they look as good as -- and in the case of domestic US pressings, perhaps even better than -- the originals!  They boast period-accurate labels and the discs come in protective plastic lined inner sleeves (in addition to the original inner-sleeve designs).  So these are a good option for those of you who -- like me -- may have played your originals to death or simply have been waiting for a better sounding option to be released.

Read all about it! Extra Texture! 33 & 1/3! Great George Harrison albums back in print and now available at your favorite record stores!