From The Music Pulpit: Musings On Record Store Day 2014

I have been watching with some amazement a lot of curious threads on various social media sub-groups this past weekend,  places where enthusiasts of music collecting -- vinyl collecting in particular -- have been grumping about the growing popularity of an event some of us celebrate called "Record Store Day" (RSD). 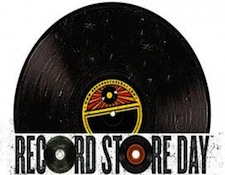 I say these posts are "curious" because I think that these people should really be jumping with joy over the ascendant popularity of a "holiday" such as RSD. We are fortunate that record "stores" are even still in business to sell us stuff.. and that artists we like are making new music... and that labels still exist to market these often unusual (frequently fun!) limited-edition releases which come out on RSD.

I feel like some back woods country preacher saying this but, really folks, we should be thankful!

Yet, here we have many folks grumping about the lines, the crowds and challenges of obtaining some of these releases as if it were an almost end of days scenario. I think a lot of these people are missing the point. And -- maybe just maybe -- a bunch of them need to get out of their man caves a bit to take some deep breaths of cool fresh air.

In the wake of the growth of CD in the 1980s/1990s (and then the download revolution in the 00s) collectors of vinyl devolved into this sort of exclusive club, a group of believers (like me!) hanging onto the joy of the 12-inch vinyl format, living the analogue dream. These folks were the ultimate hipsters in many ways and some, it turns out, wanted to keep things that way. Then a new generation of youthful hipsters caught on to the coolness of vinyl records and put aside their downloads for vintage turntables found in their parent's basements and attics. So, now that collecting of physical product like LPs and 45s is getting popular again, albeit in small baby steps, some of those folks from that early club of proto-hipsters are feel somewhat alienated.

Really? That is what I'm sensing.

This resurgent wave of post-MP3 vinyl discovery brought some new vibrancy to the industry which in fact was -- and in some ways still is -- teetering on the brink of nonexistence.

Seriously folks. I know so many good people in the record business (and its related support industries) whose lives have been detrimentally impacted by the digital revolution, music piracy and general disinterest in music.

That is where I break away from that pack as this alienation is something I don't quite get.

Sure, the club has been infiltrated by young hipsters and some inevitable bandwagoneers. 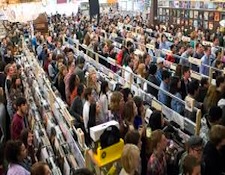 All this new buzz for records and music in general is REALLY GREAT for the hobby and all the related industries, from the artists to labels to designers to manufacturers and shipping companies.

Without this buzz-worthy growth there might well be no NEW records to collect anymore outside of swap meets, flea markets and thrift shops. Remember kids, the labels more or less stopped pressing vinyl in the early 90s, focusing almost entirely on CDs.

Today we are witnessing a resurgence of a marketplace.

A new high-end audiophile store (records and stereo systems) opened recently here in San Francisco in one of the spiffier neighborhoods. A store also opened in the uber-hipster Mission District selling cool looking (but not really audiophile) music systems. Is that a bad thing? No way! This is exciting stuff folks.

Think about it: a NEW store opened up that is selling high-end audio gear and vintage vinyl! How nice it is to see that after years of closures of one store after another.

Without events like RSD, all this might not be happening and you wouldn't be seeing lots of nice audiophile reissues happening from companies like Mobile Fidelity and Sundazed. You see, this is not just about the RSD limited edition stuff. Its about appreciation of sound and music -- these fans of the warmer sound of vinyl are the same people who will likely eventually step up to high resolution downloads for some recordings such as those offered by HDTracks.com or perhaps even Neil Young's Pono system.

All this stuff is connected, big picture style. 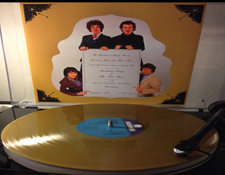 So... yeah... Record Store Day 2014 was a big wild and woolly mass of people waiting on extremely long lines for sometimes pricey recordings that were made in limited-edition quantities. Not everyone got everything they wanted. But, many did!!! By going to three stores over the weekend I got most of what I was looking for and then some.

Possibly the most important thing I saw going on at RSD was the sense of fun returning to the retail shopping scene. I saw groups of friends going to the stores together, sharing the day, plotting strategies on what they were going to try to get when they got into the store. These were men and women -- and even some parents with kids -- getting together to shop for music in a physical store. Some were buying things that were not RSD exclusive releases.