From The Archives: New Collections By The Creation & Flamin' Groovies

In the history books of British rock 'n' roll (and pop music in general for that matter) there are scores of unsung heroes who were vital parts of the music scenes of their times, but which are often forgotten over time. Many of those groups and artists were strong candidates for mainstream success, but for whatever reasons the star making machinery never worked its magic for them. 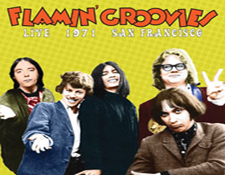 The luck of the draw, perhaps, as they say...

One of the recent discoveries in the cannon of British Invasion music that never quite got the chance to actually "invade" America is  The Creation, a band which I somehow more or less missed along the way. I'll be honest: if I'd heard them before, it was on a compilation album somewhere but I don't ever remember coming across any of their recordings in my record collecting crate digging adventures.  This is somewhat shocking to me as I am a fairly strong student of all things British rock and British Invasion.

That said, isn't it cool to learn something new about a type of music you love?!

Accordingly, here we are reviewing a fine and well curated compilation of sides by The Creation called Action Painting on the Numero Records label. This band was produced by none other than Shel Talmy, the same producer who worked on early recordings by The Kinks and The Who!  Not surprisingly this group sounds very much like both of those bands circa 1965-66.  This great set features tracks freshly remastered by Talmy himself (!) and includes brand new Stereo mixes. It comes housed in a nice hardbound style book cover with equally sturdy slip case and copious liner notes -- from what I have read from fans on line, this is the long overdue super deluxe treatment for this overlooked band. You can even get it on a two LP set as well (I've seen it in some indie stores but you can also order it online direct from the label right here) 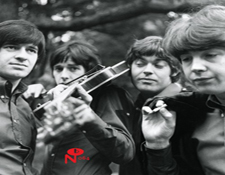 Unlike some other UK underdog bands whom many know about and still listen to -- The Action, The Move, Tomorrow, etc. -- The Creation's influence seem a bit more akin to The Velvet Underground, with a reputation that grew steadily in their aftermath.  Paul Weller of The Jam was apparently a big fan.

For the most part it's pretty rad stuff here!

Well I'm still exploring and internalizing this music, it sounds quite good in keeping with the sound of those early Who and Kinks albums (which, in general, were fairly brash, wire-y affairs, yet rocking just fine especially when you turn up the volume).  You'll hear punchy slashing electric guitars. You'll hear pounding drums ala The Who's Keith Moon and ala The Small Faces Kenny Jones.  You'll hear their guitarist playing his electric guitar with a violin bow years before Jimmy Page did it with Led Zeppelin.

And you'll hear some neat British rock songs you've probably never heard before and that is ultimately what makes this set so special. 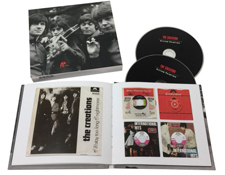 Actually, its must-hear stuff if you like bands like Guided By Voices (GBV) were very influenced by British rock from this period (especially The Who their 1967 opus "The Who Sell Out").  As with GBV, some of his music presents something of an alternate universe perspective to the British invasion. Well.... at least here in America it is a alternate universe perspective because for the most part, some small single releases aside, The Creation were virtually unknown here.  That makes them no less good.

Even the twee songs somehow work, falling somewhere between the pure pop of Herman's Hermit's and the raw ramp The Small Faces. "Big Bam Pow" and "Painter Man" -- a song which hit number 36 hit on the charts back in the day -- re both jolly good fun! This set is worthy of your attention if you like all things British rock from the mid-'60s. The Creation are quite fascinating and I will be digging down deeper into this set in the months ahead; after several spins of Action Painting, I know this is a keeper.

Speaking of unsung heroes, here in America, San Francisco's own Flamin' Groovies have a handy archival release out on Rock Beat Records. Live 1971 San Francisco is a cool reissue of sorts - - actually it's a new domestic release because as far as I can tell it had only been issued in Europe (and under two different titles Bucketful of Brains and Slow Death, Live!). For some reason, this new edition appears to be missing one song from the set so that is a bit of a bummer. But still, if you can find it at a reasonable price, its worth hearing if you are a fan of the band.

This release includes liner notes by head Groovie and lead guitarist Cyril Jordan, who reports that this show -- from the closing of The Fillmore West in 1971 (aka The Carousel Ballroom) -- was also the last to include band co-founder Roy Loney (who soon started his own band). 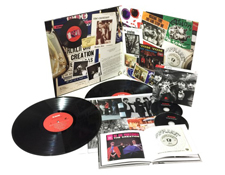 The pressing quality here is respectable enough, issued on standard quality, dark black and quiet vinyl. The sound on this recording is -- as I said earlier -- archival in nature (its probably an audience cassette recording originally) so this is one for the hard-core fans mostly...  be forewarned.

Still, if you are a Flamin' Groovies fan and don't have any of this live material in your collection, it is a cool thing to hear including rocking versions of Groovies' greats like "Slow Death" and "Teenage Head" played in front of a small but appreciative crowd as they were opening up for (based on the liner notes I assume it was) Creedence Clearwater Revival and B.B. King!

You can find both of these fun releases at your favorite independent record stores as well as online at Amazon. We have embedded links to both albums in the titles above as well as here in this final paragraph.