Y'know... sometimes I could just kick myself! 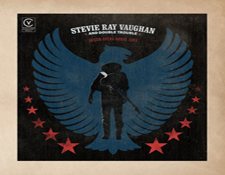 Really. I am but a mere human and in the past have made some dumb music decisions which -- when I recognize the stupidity of said decisions -- it I just want to smack myself in the head like Homer Simpson.

In his immortal word: "Doh!"

That is how I am starting to feel about my lack of attention to Stevie Ray Vaughan, a now legendary guitarist who I stupidly passed over back in the day when he was alive and wowing crowds.

Why did I skip on seeing him? Well, because simply I thought he was doing mostly a Hendrix tribute act and I wrote him off as a pleasantry, knowing I could simply enjoy my Hendrix albums whenever I needed...

I mean, Jimi was the original guitar hero, right?

The thing I overlooked was the basic facts that
(a) Hendrix was dead and wasn't coming back any time soon,
(b) I never got to see Hendrix perform live and
(c) that Stevie Ray was in fact expanding upon Hendrix's legacy with grace and honor and a twangier twist to the blues this side of Johnny Winter.

Fortunately, there are many wonderful archive releases of Stevie Ray Vaughan out there for me to explore, to compare and contrast with Hendrix as well as the multitude of other blues giants.

Recently Wolfgang's Vault, the great personal audio archive of the late impresario Bill Graham, issued a 1984 concert by Stevie Ray Vaughan on a sweet two LP, 180-gram set via their own Concert Vault label. The website store recently had a tremendous six-hour sale so I couldn't resist buying the album -- recorded at the Austin Opera House -- at a killer price and I'm really pleased with it!

First the sound: this is no boxy reference monitor mix off the soundboard. No, this is a full, properly mixed show (probably done for a radio broadcast back in the day) presented on dead quiet vinyl that is well centered. For the most part, it sounds pretty killer when you turn it up, with SRV's scorching leads warmly supported by his tight hot swingin' band. There is a bit more bite on his vocals than I'd like to hear but I suspect that had more to do with the microphones used on the live stage and how close he was singing to it. Other than that, this one is a keeper and an inspiration for me to check out other SRV releases.

So, yeah, I feel pretty dumb about this although even on the Wolfgang's Vault website they admit:

"His charismatic live performances, in which he would invariably channel the spirit of Jimi Hendrix for the hordes of young fans who had never seen the Voodoo Child in the flesh, were bone-chilling. Between the jaw-dropping chops, the tough Texas persona, the flamboyant garb (from his black bolero hat with white plume right down to his snakeskin cowboy boots) and the Hendrixian mystique, SRV was a bona fide guitar hero for a new generation."

So, my bad for missing out on Stevie Ray Vaughan back in the day when I had the opportunity. I'll be checking out other releases soon, for sure. I already have a sweet SACD of Albert King with SRV that I will review at some point in the future.
Lesson learned.

Guess I better get to checking out Joe Bonnamassa's music these days to see if I connect with him at all.