I knew something was up with Filet of Soul, the first time I heard surf-pop pioneers Jan & Dean's fairly lame 1966 release. While a few of the songs were OK, in general it was a collection so weak that I got rid of the record years rather quickly as I was digging down into their catalog -- it didn't make it into the collection.  I figured that there had to be a back story on that album, but until recently I never knew the actual tale. 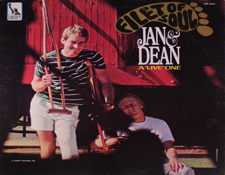 So when the publicist for Omnivore Recordings contacted me about an archival release by this influential hit making team from the mid 1960s I jumped at the opportunity... an opportunity to hear what Filet of Soul was originally supposed to be.

In short: this was a contractual obligation creation. In 1965, the pioneering surf-pop duo was still riding high on the pop charts. A TV pilot was in the works and their reputation was solid among the influential musicians of The Wrecking Crew (who played on many, if not most, of their recordings). Not wanting to give away their best material, the initial concept behind Filet of Soul was to make it a fun, near-comedy record, offering up only the most middling of tracks simply to fulfill their contract.  The title was a play off of The Beatles' recently released Rubber Soul album -- Jan and Dean were both huge Beatle fans and thus this album includes several covers of their tunes from that period. This was recorded in late 1965 folks, just under two years after The Beatles took America by storm. 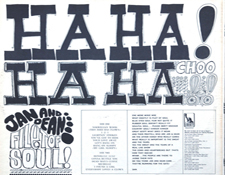 Needless to say, the label was not amused and rejected the album. Then shortly there after Jan Berry had his tragic car accident which was in the news everywhere, so Liberty Records jumped on the opportunity, stripping out the comic bits from their production and rush releasing in the wake of the tragedy.  Not surprisingly, it tanked, so Jan & Dean did get their wish ultimately.

In the new issue from Omnivore Recordings -- called Filet of Soul Redux -- we finally get to hear the rejected master recordings from that transitional period for the band and it is quite a fascinating listen.  It is a curious release to hear the original incarnation of Filet of Soul, especially coming from clean cut Jan & Dean. This is a pretty surreal listen as it gets a little trippy at times! The psychedelic movement was still a little ways off  and the Southern California freak scene was probably burbling under most people's radar. 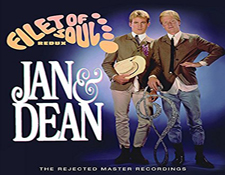 Still, imagine my surprise putting on this new CD and finding it sounds like a low budget bubblegum version of Zappa's Freak Out!  Of course, I realize that is pretty improbable given that Freak Out wasn't recorded until March 1966 and this was recorded in late 1965 (again, released after Jan's accident in April 1966).  And please, don't read too much into my Zappa comparison -- I'm saying that just to give you some perspective on what to expect.  Other than the notion that it shows that Jan & Dean had a good sense of humor (something Zappa definitely had!), Filet of Soul is decidedly not even remotely "like" Freak Out.

Sill, for an innocent album of goofy comedy bits tossed together with strange sound effects, horns, barks, snorks, coughs, giggles and other sound effects, it is not too much of a stretch to consider that -- perhaps, just perhaps -- our dynamic surf duo might at least have been aware of the burgeoning LA freak scene and incorporated some of what they'd seen and heard into this album.

However, this is just speculation and I admit I may well be very wrong... 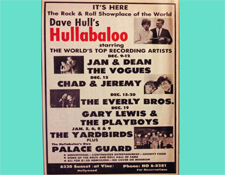 A curious thing I noticed is the label on the CD which offers some -- lets call it -- self-depreciating commentary about the contents of the recording.  Upon closer examination of the included booklet I found in teeny-tiny fine print  -- so small that I had to get out a magnifying glass to read it (I really have to get reading glasses soon!) --  that this album is taken from the only known surviving acetate cut of the original album.  An acetate is a type of of test pressing record usually given to the artists to listen to and approve -- acetates were not designed to be played a lot so that makes them all the more rare. This recording is also entirely in Mono.

That said, looking more closely, I noticed that underneath the jewel tray is a reproduction of what appears to be the actual Liberty Records test pressing label, which the Omnivore CD label mimics -- it is a very cool bit of attention to detail that as a collector of rare records, I appreciate very much. So kudos to Omnivore for this nice touch!