By now many of you may have noticed that I rarely write negative opinions here at Audiophilereview.  I'm not trying to sugar coat things, its really more about limited bandwidth: I only get two articles per week here so I'd rather focus my attention on positive things that I can heartily recommend. But every now and then something crosses my path that annoys me enough that I suspect it might bug you as well, Dear Readers. So, from time to time, I feel somewhat obliged to herald a warning call. When it comes to things like complaining -- some might call it whining -- about bad vinyl pressings, we all could use a little Super Hero covering our backs. 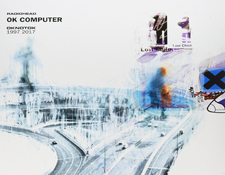 Vinylman to the rescue!

Holy back-beats Vinylman, that is some sorry plastic you're spinning there!

To the man cave!

Silly levity aside, sometimes I think that it would be nice to know there was a superhero out there covering our backs when it comes to buying new media, be it vinyl or a Blu-ray or even a stream for that matter.  The best we can do however in these days of the world wide interwebs and social media is to share information and try to keep one another informed of our trials and tribulations.

So... holding up my end, please know that I for one have had problems with the new deluxe edition of Radiohead's expanded vinyl incarnation of its classic OK Computer album, now retitled OKNOTOK.   The title should have been a warning sign, a foretelling of my experience: its ok, but not really ok ... 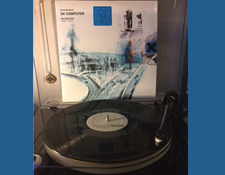 Well, first I bought the new limited edition BLUE vinyl copy of the album.  And I had to return it. And yeah, yeah, I hear you in the back row snickering "I told you colored vinyl always sounds bad....   Actually, the standard weight blue vinyl was fine, well centered and all that but the pressing I got was noisy -- that is not necessarily an issue with the vinyl itself (more on that in a bit). But it was especially annoying to the point of ruining the listening experience for me at the start of quieter tracks.  To quote Mr. Horse from the old Ren & Stimpy cartoon show: "No sir, I don't like it!"

Amoeba Records was gracious about taking it back, which I appreciate as I understand that stores these days are being held hostage by a CD-era "no returns" policy.  That practice really should be changed as its not fair to the stores nor the consumers -- I have had numerous store clerks try to talk me out of returning albums, trying to guilt me into keeping an imperfect record that I'd spent $30-50 on.  Um... no. That doesn't work for me (and I suspect most of you).

I know a friend who was bounced from a major online retailer because he made too many returns of bad vinyl pressings they were selling. I don't doubt him at all -- he is just an audiophile with high expectations from his high priced vinyl purchases.  But I guess they thought he was gaming the system (he's got better things to do with his time than stuff like that). 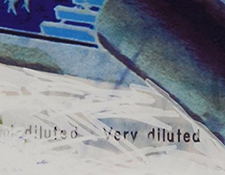 And I know these albums CAN be manufactured well and reasonably. Look at the Zappa Joe's Garage reissue (which I reviewed earlier this year) which is not only an outstanding restoration and a high quality pressing but it is also being sold at a very reasonable price (about $12 a disc for a 3 LP set).

Anyhow, back to my Radiohead experience, after the blue vinyl bust I decided to wait until the 180-gram black vinyl version of the set came out to try my luck at a better pressing.  And guess what: it was as bad and in some cases worse. The similar distortion and noise at the start of the album sides was present -- perhaps it was a dirty stamper? -- but also the third album had a big scratch across it.  A couple of them, actually...

From discussions on various Facebook record collecting groups I've learned that the UK pressings of this album apparently sound fine and are pressed well. A friend up in Canada reports that his copy is fine as well. So I'll be on the look out for one of those non-US editions for this and all future Radiohead vinyl releases. 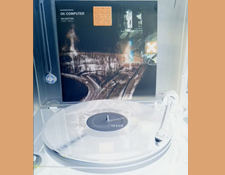 This is disappointing on many fronts: in the past XL Records has issued typically good quality albums, so I am not sure what is going on there these days (my copy of Radiohead's KID A on the XL label sounds generally fine). Did they switch pressing plants for this new run of reissues?

I guess, for me at least, this marks the reinstatement (if you will) of one of the old school "laws" of record collecting which I learned long ago and thought was behind us:  buy the pressings from the country of origin for the best possible sound. This very much was the case for record collectors in the 1970s and '80s when it came down to European and British rock artists.  My original UK and German pressings by Elvis Costello, Nektar, and many others generally make the US counterparts from the period pale in comparison (fortunately, some of these have been rectified, particularly Elvis Costello's catalog which I've reviewed a bunch here on Audiophilereview).

Anyhow, my goal with this rant is not to be pissy and whiny -- its really more to give a heads up to consumers like you, Dear Readers, and perhaps offer up a reminder to the labels and the pressing plants that we ARE paying attention. The quality of your offerings matters...