In a recent conversation I had with our publisher, we discussed demo discs and how at some of the audio shows many an entity would fall back on the tired, tried and true for demonstrating their new speakers, amplifiers, cartridges and DACs. As much as I like Steely Dan's AJA, I had to imagine there were other options out there for demonstrating one's audiophile prowess. Of course, there are exceptions: a visit to the demo room for Ray Hall's Music Hall turntables one year at CES introduced me to a fine recording by Seu Jorge and Almaz (which I now own on vinyl and CD). But still, the number of places playing overused tracks from The Eagles, Fleetwood Mac and Diana Krall was somewhat surprising in this day and age (and don't get me started about Jazz at the Pawnshop... ). 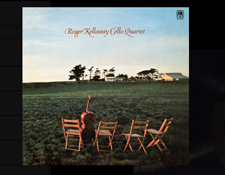 That said, our publisher encouraged me to write about other demo worthy discs people might have missed along the way (older and newer). One such disc came to mind recently when I found a near mint promo copy on vinyl (in the bargain bins at Amoeba Music) by session pianist and composer Roger Kellaway.  Many of you may not know Kellaway's name but you might well know his playing. Consider these lines from his official bio: "Grammy Award winner and Academy Award nominated Pianist/Composer, has recorded more than two hundred and fifty albums. He's worked with everyone from Ellington to Elvis, Carmen McCrae to Barbra Streisand, and Quincy Jones to Yo-Yo Ma." Kellaway wrote and played the piano piece heard every week for many years on the closing credits to Norman Lear's groundbreaking sitcom All In The Family ("Remembering You") and his song "Come to the Meadow" was used as the theme music to the popular NPR program Selected Shorts.

On an album simply titled Roger Kellaway Cello Quartet, in the early 1970s, Mr. Kellaway offered up his vision for a group that blended elements of jazz, classical and other world musics into something then fresh and new. This was a period when groups like Ralph Towner's Oregon were emerging, blending exotic Eastern instrumentation with jazz. Vince Guaraldi was arguably one of the first jazz artists to cross over into the pop realm with a sort of Latin-jazz-tinged pop instrumental;  his now-classic Grammy-winning song "Cast Your Fate To The Wind" delivers a melody that embeds itself very quickly into your psyche (from 1962's Jazz Impressions of Black Orpheus).  Like wise, saxophonist Stan Getz too helped set the stage for hit crossover collaborations with Antônio Carlos Jobim and Astrud Gilberto (ie. "The Girl From Ipanema" and such). 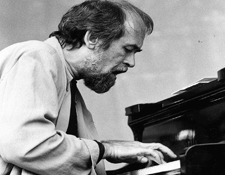 Now, there might well be some of you out there who might write off this type of music as pop or even new age-y "fluff" -- and I get that -- but I will argue that this Roger Kellaway Cello Quartet album offers more than that (and thus the underlying point of this review).  This album appeared many years before the pablum of bland new age noodlings set in and became a mainstream thing in the late 1970s into the '80s. No, there was a compositional freshness to what Kellaway was doing.  I found an interesting entry on the biography for him supporting this album up on Tidal which might shed some light as to why this music resonates with me: "He assembled a novel quartet featuring his piano, the late Edgar Lustgarten's classical cello (Kellaway's favorite instrument), Chuck Domanico on bass, and Emil Richards on marimba and percussion, writing pieces using chord symbols and notes without stems to allow for improvisation. The resulting album falls ever so neatly between the cracks of classical music and jazz, sometimes leaning in the latter direction (e.g., the Latinized groove of "Jorjana #2"), but mostly occupying a never-never land of Kellaway's own invention."

So, by now you are probably wondering why I'd consider this a worthy demo disc?  Well, first consider the instrumentation of his core quartet: acoustic piano and bass, cello, percussion and marimba.  Right there you have plenty of dynamics to test your gear's capabilities, all challenging instruments for systems to reproduce accurately. Some tracks here also feature orchestral accompaniment, so your gear gets that additional challenge of working those rich sounds. The album is recorded very simply, like an early jazz recording in many ways, so there is a sense of sonic purity throughout which is very appealing. There are times where -- like on some classic Oscar Peterson records -- you can even hear Kellaway singing along with his improvisations on the piano, notably on the aforementioned samba-like "Jorjana #2," a tune which proves buoyant due to Chuck Domanico's propulsive acoustic bass lines.  And, when the orchestra comes in at the end of that piece, the music takes on this really nice, swirling cinematic flourish, with bright bells signaling the transition. On "Esque" there are some lovely percussion moments where Emil Richards plays (what are probably) "Claves" -- you feel the studio presence there. And through it all, there is a sense of purpose to these recordings -- they don't feel churned out as emotionless "product" in that sense. 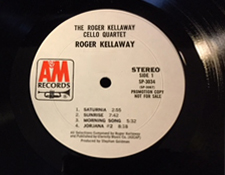 How does this all sound overall on the different available formats? Well, the vinyl pressing is super nice for its warmth and the pressings I've had over the years have consistently sounded clean and bright (but not overly so). This is a rich, round recording in that sense.  The standard CD version I have sounds very good all things considered, and it gets brownie points for removing any remnant issues with vinyl playback (70s pressings admittedly could be noisy, although A&M Records was noted for delivering generally high quality pressings for the most part). The CD quality stream on Tidal sounds fine as well. This is one of those nice moments where the digital transfer seems to have been handled well so the music doesn't display much in the way of digital harshness. In fact you might even hear some tape hiss in there -- which I am ok with because (a) that was the nature of analog tape and (b) it indicates (and I'm guessing here) that there wasn't any potentially invasive noise reduction applied along the way.  Roger Kellaway Cello Quartet is an honest recording in that sense.

Actually, the word "honest" is a good one for describing this album. It rings true. And that is something I can't always say about the many technically well recorded but otherwise emotionally heartless demo recordings out there in the land of audiophiles. Keep that in mind next time you go to demo your gear for a friend. Try something different, something that might stir the emotions.