Coltrane At Temple University 1966: The Best Part of the Trip

Listening to this pretty amazing 1966 archival release of John Coltrane's Offering: Live at Temple University, I am reminded of no less than the good 'ol Grateful Dead in terms of the sort of sonic mind trip the band takes it's audience -- and listeners -- on. 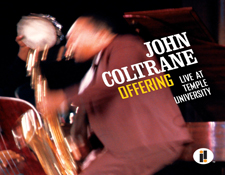 The show, culled from the master tapes from the Temple University radio station archives (where it was broadcast back in the day, November 11, 1966), starts with the familiar, relatively accessible and beautiful "Naima" and proceeds to get increasingly more intense and dense and out there.

This concert really does proceed very much like a great Grateful Dead show -- who, by the way, were big fans of Coltrane -- opening with the familiar to bring the crowd together and into the music. By the second set, they would launch into an interstellar space jam -- often spring-boarding out of a jam such as "Dark Star" or even a tune like "Dancing in the Streets" --  an improvised journey through the cosmos before bringing the audience back to earth.

As Jim Morrison intoned on The Doors' The Soft Parade album during the title track:  "This is the trip... the best part... I really like...." 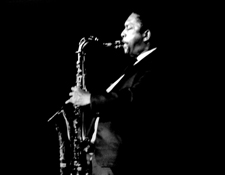 I'll jump ahead and let you know that that by side three of Live at Temple University, during a piece called "Leo," Coltrane and his band are reaching the outer stratosphere of what most people in 1966 might have known or considered as jazz. This is the more avant-garde and challenging Coltrane sound found on albums like Ascension and Om.

Frankly, the lines between jazz and the psychedelic rock music happening on the West Coast are getting pretty blurry here...

When Coltrane puts down his sax for a bit and starts singing, while the band is percolating in the background, it recalls no less than Zappa's Mothers of Invention which a year or two later would be exploring similar realms (challenging avant-garde jazz vocal-ese included, no extra charge).

When the master tape runs out suddenly at the end of that side, its almost a blessed relief.

It is a near perfect release for the listener because the music was getting pretty intense.  And while I'm sure the record label could have found some fan-recorded off-the-air tape to tack on the rest of that piece, I'm sure the fidelity would have suffered greatly.  No, ending the side abruptly where it stops was the right choice for production continuity.

When you flip the album side over the tone the band is calmer, with the title track "Offering" leading into Coltrane's classic interpretation of "My Favorite Things." 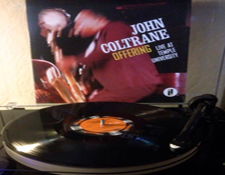 However, don't get too comfortable expecting any sort of lounge-jazz take on the popular tune (from the show / movie The Sound of Music) -- this take gets plenty edgy as well; although, compared to "Leo," its like listening to an hotel cocktail lounge jazz group, offering some cotton candy to sooth the audience's battered soul.  Still, Coltrane takes you back out into outer space for a while and then brings you down to reality quite dramatically at the end, reintroducing the main melody line over the band's volcanic rumblings.

Many confused fans apparently left during this show but you can hear, at the end, that the ones who stayed for its entirety were clearly very much into the new directions Coltrane was taking.

I don't know much about the lineage of the older bootlegs of this show that may be circulating out there among Coltrane collectors.  From the liner notes, I do know that there is only one source for the these recordings and that is the pair of master reel-to-reel tapes made at the time of the show, which have been stored in the Temple University radio station archives all these years.

So, how does Offering: Live at Temple University sound overall? Well, I can imagine that if you had a bootleg made off a fan made tape recorded off the air in 1966, then that was probably a weak sounding experience; this sounds tremendous in retrospect. As far as I know this is the first time it has been issued off the master tape from the radio station that broadcast the show.

For a 1966 monaural recording made essentially by student engineers in a college auditorium, I think it sounds pretty spectacular -- a live recording made with a single mic (according to the liner notes, they suspect) set closer to Coltrane. The "mix" (if you will) is thus quite Sax heavy, but it is what it is. Fidelity wise, it is very clean and overall full sounding with mostly a stage sound and very little audience noise.

This is no doubt a vintage recording -- don't expect this to sound as perfect as one of the studio recordings or even the professionally recorded albums like Live at the Village Vanguard -- but most certainly it sounds way way better than many archival recordings I have heard over the years that were never originally intended for released.