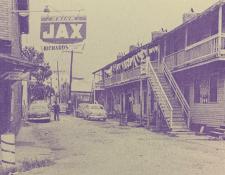 Whether I hear it in a music store, on the radio or even playing the background at a restaurant, for me the discovery process is an in-the-moment event. One of the consistently best ways I've been turned on to new music has been word of mouth: passionate recommendations from somebody whom I believe is sincere and trust. This is how I discovered the music of Jeff Buckley and Frank Zappa, for example.

When I was down in New Orleans recently, I was directed by several different people to go to a record store called Domino Sound Record Shack. It was quite a journey getting there as I walked the three-plus miles from my hotel, but it was well worth the effort because it got me outside of the touristy areas downtown  and into neighborhoods that I otherwise would not have seen. I discovered a great little restaurant along the way call Little Dizzy's Cafe where I had amazing fried chicken, grits and a biscuit!

So by the time I got to Domino Sound I was primed for an interesting experience and I was not let down. I spent at least two hours in this nifty little store exploring every quirky nook and cranny, finding some great deals. But one of the coolest things I walked away with there came about because of a conversation I had with one of the fellow patrons...

You see, it just happened that when I was there two men were being interviewed for a promotional video about the New Orleans music scene. So I got to play "fly on the wall" listening in on what they were saying while I was scouring the racks.

They were talking my language, after all!

One of the gents was a local record mastering engineer who ran a pressing plant, a local New Orleans facility designed to serve the local community: New Orleans Record Press. 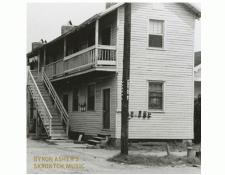 The other fellow owned a small independent label dedicated to new New Orleans music: Sinking City Records. At one point the interview discussion turned to the notion of quality of sound, the joys of vinyl and why these people are passionate about it as a mode of listening to music. You can imagine how my ears perked up at that point!

After they were done with the video shoot, I made a point of introducing myself and to explain how I wrote for Audiophile Review. We had a good discussion about music, vinyl, record collecting and all that kind of thing. As we got deeper into the topic of sound quality and vinyl pressings and such, the owner of the record label, immediately offered me two of his latest releases, pulling them out of his magic tote bag as if he'd planned for us to meet. He believed in these artists passionately and thought the albums sounded especially great and representative of his work as a label owner.

I promised him I would check them out and that leads us to this review today! In fact, I have been listening one of those records a lot lately -- Byron Asher's Skrontch Music -- as I really like it!

There's an interesting backstory on this music, detailed in the album's liner notes. It was written during an artist residency at Tulane University's A Studio In The Woods. The recording was funded by grants from the New Orleans Jazz and Heritage Foundation and the Puffin Foundation as well as an independent fundraising campaign.  Some serious backing for this composer, for sure. You can read more about Byron Asher (who also plays Clarinet and Saxophone) at his website (click here)

Asher goes on to explain more about the music's genesis in the liner notes: 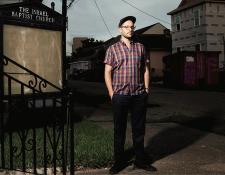 "This recording is the product of several years of research into, performance of, and thinking about early New Orleans jazz in the place where it was born, an adopted home of mine. The instigating thesis, which I have returned to many times in the process of producing this music, is that the development of jazz in New Orleans at the turn of the 20th century was inherently a radical political act in direct resistance to the racism of Jim Crow Louisiana. Following the thinking of scholars Clyde Woods and Angela Davis, I tease out this relationship between the musical and the political, ultimately hoping that this deep dive into history helps us better understand today's sonic and sociopolitical climate, both in this city and outside it."

All that said, the best way I can review Byron Asher's Skrontch Music is to describe it with gut instinct about what I'm hearing. I don't know much about Mr. Asher and his particular influences, but I'm hearing the imprint of jazz musicians past, even as the music looks forward. Spoken word samples of local elder jazz entities appear ghost-like from the beyond telling their stories. Compositional echoes of Charles Mingus, who himself in part echoed Duke Ellington at times, tumble around you like musical messages in a bottle be-bopping in the ocean. For an immediate taste on YouTube, check out "Blues Obligato" (click here) and "Elegy" (click here).  There is a cool trailer for the album as well (click here).

All that legacy connection stuff would be moot if the music wasn't compelling and that's where Byron Asher's album stands out -- there are some great tunes here! At times it reminds me of some of the more melodic parts of Mingus' Ah Um and Oh Yeah as well as the joyous spirit of Coltrane's A Love Supreme. But then just when I thought I've nailed things down all of a sudden I'm hearing echoes of Frank Zappa's Grand Wazoo, a short-lived swingin' big band jazz-rock assemblage from the early 1970s which was featured on a couple of compositionally dense, musically intense albums including Waka Jawaka (both records which I grew up with and absolutely adore). There is a richness going on here which you can sink your musical teeth into and that, I would guess, is probably a good part of the reason Sinking City Records released it. 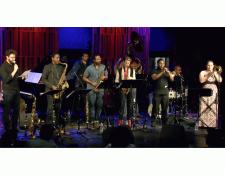 I was pleased to find Byron Asher's Skrontch Music streaming up on Tidal in CD-quality (click here to jump to it). It sounds quite sweet and warm -- it is super handy for listening in the car when I'm not playing the vinyl. The LP itself is well centered and dead quiet. Its a fairly lush sounding recording, as you can imagine given the near big band instrumentation. Sinking City Records and New Orleans Record Press have paid a lot of attention to quality controls, so that is terrific news for a small independent label and pressing plant to watch the little details that matter. I can't always say that about independent releases (heck, I can't always say that about major label releases!).  So, kudos to these folks for a job well done.

Byron Asher's Skrontch Music is available for download on Amazon (click the album title anywhere in this review and it will take you there). You can order the vinyl LP from the company directly at Sinking City Records.

I don't claim to know every bit of music that is out there in the universe being made, but it's been along time since I've heard a new jazz work by a relatively new artist that draws me back for repeated listens.

I'm sure there are others out there so if you, Dear Readers, know of any compelling new jazz releases from the last 15 or 20 years which you would like to share with us, please tell us down below in the comments section here on Audiophile Review. This way we all get to learn (and who knows, I might end up reviewing it!). 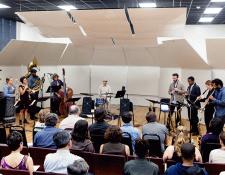 Ok, so one last thing from the liner notes before we wrap up things here today.

You may be wondering what "Skrontch Music" means.  Asher offers up this insight:

"Skrontch Music borrows its name from a lesser-known swing era dance step, the Skrontch, which Duke Ellington featured in his show at the Cotton Club in the late 1930s. The lyrics to Ellington's 1938 recording of Skrontch instruct us: "Skrontch on the four beat/Skrontch then you repeat/Skrontch up on your toes/And then start to cover ground." The emphasis on beat four propelled a dancer into the next measure of music, and like the dance, this music pauses in the here and now, looks back from where we came, and steps forward."