Come clean with me folks: there are many of you out there who have at one time or another bought an album or CD -- or book or car or whatever -- that you REALLY didn't need. You knew it was an extraneous purchase of something you either already had in a perfectly functional version or perhaps you just wanted because it was neat to have. 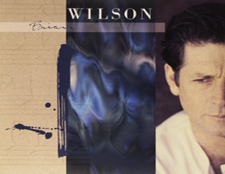 I know I'm guilty of this, more times than I care to admit to. But hey, we're all friends here so I am going to clean: I did it again on Record Store Day (aka Black Friday) just after Thanksgiving.

No regrets. But, due to that experience, I've gotta spell some things out for you, Dear Readers, in case you decide you are still on the fence about this ...

You see, I bought another copy of Brian Wilson's eponymous first solo album

Brian Wilson is a fine album. It is a record that I really love it for the most part. Yes, love.

Even with the dated production values, only one or possibly two songs on it ever gave me -- and still give me -- the cringes and I can weather them due to many other over-riding and magnificent joys within: "Love and Mercy," "Melt Away," "Let it Shine" and many others.

I have Brian Wilson on the Rhino Archives series CD from 2000... and the original deluxe edition promotional CD as well as on the original vinyl from 1988. So did I really "need" the new two LP edition put out for Record Store Day just because it was on really pretty marbled slate-blue colored vinyl?

So why, pray tell, did I buy it, you are probably wondering? I didn't even hesitate a second. I knew I needed to get it. 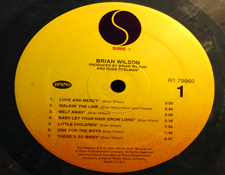 This is that part of the record collecting hobby that defies logic. And I bought this sort of half suspecting it wasn't going to blow me a way...

Am I disappointed? Yeah, a little.. but you might not be.... thus I'm writing this review...

Don't get me wrong. Brian Wilson sounds just fine and if you don't have the album you should own it in some form (and if you like colored vinyl it might as well be this version!). The sound of the recording on vinyl sounds about the same as the 1988 version. And the bonus tracks are -- as far as I can tell -- exactly the same as the bonus tracks on the Rhino Archive CD.... in the exact same running order.... Hmmmm..... I will just leave that factoid here for you to dwell on, Dear Readers.

So, no I really didn't need to spend the $30 on this other than to make sure I could review it for you, Dear Readers, and to support our hero, Brian Wilson.

There IS one enormous difference on the packaging of the new vinyl here and its an important one to discuss: there is NO mention of Dr. Eugene Landy! If you haven't seen the film Love & Mercy yet, you really need to check it out to fully understand just how insidious this mad (so called) Doctor (who eventually lost his license to practice) had become to Brian's life around the time he was making this album; the guy secured credits on the original album as Executive Producer!

So to have a nice new copy that has that supreme creep-o removed from the credits is actually a very nice thing.

And its really nice to be able to play all the B-sides and bonus tracks on vinyl, especially the joyous "Lets Go To Heaven in My Car."

The standard vinyl is perfectly centered and the vinyl pretty much dead quiet. It sounds good for what is probably at it's root an early digital recording. It is one of those realities of the late 80s and early 90s for a lot of artists' output. 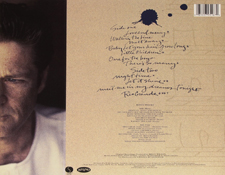 Again, if you don't have the album and are a fan of The Beach Boys and Brian Wilson's productions, then I think you should get it, especially if you can find it on sale somewhere. I will go as far as calling Brian Wilson an important album, despite all its short comings and the difficulties that went into its creation. The 2000 CD has a nice informative booklet included which you should seek out if you are interested in this phase of Brian's career.

Brian Wilson (in any form!) is worth the price of admission even just for the underlying message in the chorus of one of the album's best songs: