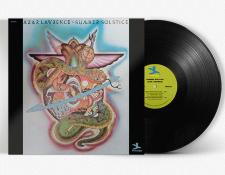 So... There is this thing that seems to happen in my universe of music... It is that moment when are you discover a musician or a band that you've never heard of... An artist whom even everyone you know has pretty much never heard of... And for some reason you like them a bunch so you start to dig deeper...  And, in some instances, said artist only has a couple of records out or maybe has an intriguing bio which reveals their support roles beneath other major name performers you know and love... So you keep digging to uncover the lost gems...

It is this treasure hunt process of discovery which makes the hobby of music so magical for me.

Once such recent discovery for me is Azar Lawrence. My journey began well over a year ago when I found his 1974 debut album -- Bridge Into The New Age -- at a thrift shop or vinyl record store bargain bin somewhere.  I was intrigued because it was produced by Orrin Keepnews and was a white label promotional copy from a legendary jazz label, Prestige Records. I liked the record just fine, but for a year after I did not see any of his records in stores or in the wilds of collecting (garage sales, thrift shops, flea markets, etc.). 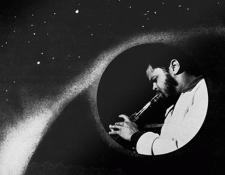 That is, until -- and you knew there was going to be an "until" - - I received a press release from the good folks at Jazz Dispensary (a Craft Records subsidiary) announcing a reissue of Lawrence's second album from 1975, Summer Solstice.

Ding! Ding! Ding! Apparently I was not the only person in the universe who knew of this artist. It turns out that Mr. Lawrence has a pretty groovy reputation both among deep jazz buffs as well as sampling hipsters 'n DJ remixers 'n such (click here to trace samples from tracks by the likes of Cypress Hill and Madlib via "Who Sampled").

How Summer Solstice and Azar Lawrence in general fell between the cracks of even my basic awareness is beyond me because it is pretty wonderful. It happens. Better late than never, as they say... 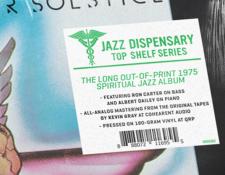 I suppose it helps to listen in context with what was going on at the time of its release: here was a guy coming out with spiritual leaning improvisatory music that at once recalls John Coltrane and McCoy Tyner with Stan Getz-ian Brazilian / Bossa Nova stylistic twists at the dawn of disco, punk and new wave. In 1975, jazz was in transition as a popular form, going many different directions at the same time... Place period releases by Charles Mingus next to Return To Forever, Weather Report, Pat Metheny and John McLaughlin's Shakti and you get an idea that people were pushing boundaries, exploring and expanding.

Anyhow, I'm happy to report Summer Solstice is excellent and is perhaps another demo-worthy disc for all you audiophiles out there to consider. The LP is crafted in an all analog transfer and mastering process by Kevin Gray at Cohearent Audio. Manufactured at Quality Record Pressing, the dark 180-gram vinyl is dead quiet and perfectly centered. 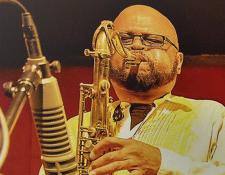 This is significant, especially if you are somebody who likes to collect original LP pressings of rare albums. Remember that in the mid-1970s there was an oil crisis going on -- oil being one of the key ingredients in making vinyl-- so there were a lot of very noisy albums pushed out during that period as labels cut corners (with rumors of recycled vinyl circulating among collectors back in the day). So even even if  you found a nice original, chances are it won't sound quite this nice. I know my white label promo of Lawrence's debut is not this crisp and quiet!

Ultimately it is about the music and Summer Solstice is one of those albums which grows on you with each listen, sounding quite timeless. The band here is pretty killer including Ron Carter on Bass and Billy Hart on drums (who played with everyone from Miles Davis to Stan Getz -- he's even on the fabulous Resonance Records release of the Getz-Gilberto concert from 1976, which I reviewed here a while back!) 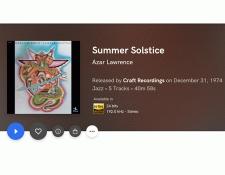 I immediately liked the sound of Lawrence's Soprano and Tenor Saxophone playing. Maybe you will too. This is the good stuff and it is another example great sounding music that is possibly demo worthy depending on your tastes.

Handily, you can explore Summer Solstice streaming on Tidal (click here) in MQA fidelity (which sounds pretty solid in 96 kHz, 24-bit fidelity but has a brighter sheen than the warmer feeling vinyl). There is a 192 kHz, 24-bit version up on Qobuz (click here) which sounds closer to the vinyl experience, so perhaps its further evidence that those additional frequencies really do matter.

Any way you listen, Azar Lawrence is clearly a musician who's output is worthy of your time and exploration.