Inevitably, there are going to be haters of this new album by Thom Yorke -- Tomorrow's Modern Boxes -- which was released as an appealing $6 download some weeks back. Thanks to my music buddy Milton, I was happily alerted to the fact that there was link on the download site where a physical version of the album could be purchased. 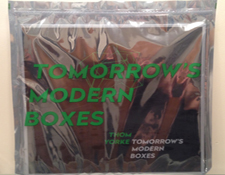 It wasn't cheap as an import item -- costing me ten times the cost of that download -- but it sure promised to be something interesting and (if you will) more deluxe. I sprang for it knowing that you, Dear Readers, might be interested to know about it.

As it was, I didn't want to listen to the initial download of the album (available when I purchased it) until the physical vinyl arrived yesterday. I wanted to absorb the full, shall we say, artistic statement Yorke was making with this release.

I'm not being snarky here.

I'm glad I did wait to look and listen as the package is as otherworldly as the music within, arriving in a giant custom static-free bag (like you might get when buying a new hard drive or other computer component) and featuring cool illustrations and other graphics. One side of the inner sleeve depicts a forest of trees with their limbs cut off (perhaps a reference to Radiohead's prior King of Limbs album) while the front cover shows a devastating landscape that appears to be the moon but when you flip the backside you realize its a forest that has was cut to the stumps and then dug out of the ground.

There is handwriting there that reads: "earth gone deaf."

Yup, this cover art screams the question of whether anyone listening and paying attention to what is happening in our environment? Clearly Yorke is aware and he want you to be as well. Perhaps the "modern boxes" he's talking about on the album's title are our own wooden caskets made from earth's last remaining trees?

The record itself is lovely snow-white, dead-quiet,180-gram vinyl with small "undersize 75mm" labels bearing some cool graphics that tie the whole package together.

With the arrival of the album, came another download card, so this time -- as it offered WAV as an option -- I decided to opt for that. It took longer to download, for sure, but I was curious if there might be any noticeable difference.

While its downloading, I'll get on to the music and come back to that in a bit. 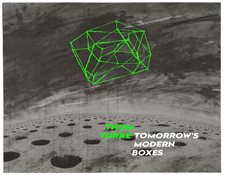 This album is not a throwaway and is immediately more engaging than Yorke's first solo album, The Eraser (which I'm admittedly probably overdue to give a good re-listen after all these years). Continuing in the realm of where Radiohead has been these last number of years, this album is full of tripped-out synthesizer sounds, old school drum machine bits, bending piano, glitchy cut-up production tweaks and most importantly, Yorke's haunting voice and challenging songwriting.

Tomorrow's Modern Boxes really does underscore the undeniable fact that so much of Radiohead's sound lies in Yorke's haunting voice. While some would argue against what I'm about to say, I can't help but feel that this album is very much a part of -- and continuation of -- an exploration that began with King of Limbs and stretched out into the "side projects" Atoms For Peace. Or possibly its a continuation of the deconstruction / reinvention Radiohead began with Kid A and Amnesiac.

At their core, all of those songs are "owned" (in an artistic sense) by Yorke, even though others in the band may have had input on their creation.

It is kind of like trying to consider Pete Townshend's solo work separate from The Who. You really can't.

Sure, the other guys added essential stuff that made Quadrophenia and Tommy and Who's Next what they were. But.... go listen to the demos Townshend made for those recordings (most have been commercially released) and you'll hear just how much he brought to the table.

Thus, when i'm listening to nearly funky tracks like "A Brain in A Bottle" and "The Mother Lode," I can't help but hear in my head Radiohead playing these songs.

Am I saying these are unused demos for Radiohead? No. But they might well have been part of a blueprint for something that Radiohead could have built upon. No question. Heck, Tomorrow's Modern Boxes was produced and edited by longtime Radiohead producer Nigel Godrich and even some of the beats (on "Guess Again") were programmed by Radiohead bassist Colin Greenwood.

Anyhow, its clear that Thom must have something important he wants to say here.