Many fine new blues oriented releases are issued on vinyl records, CDs and downloads every month and many of us miss out on them. I know I am guilty of it as there is just so much out there. So I hope you will find this update of some of my recent spins helpful. Do take note that you can learn even more about the artists here by following the highlighted links to Wiki pages and artist websites; also, each sub-headline for these mini reviews will lead you to Amazon should you want to preview or purchase the recordings.  Here we go... 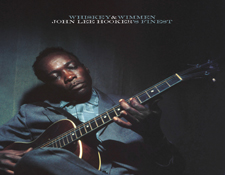 This album is really super timely as I have recently been digging into John Lee Hooker's catalog and was a little stumped as to where to really start. I mean, I have a bunch of random collections from different periods of his career -- and there is a lot of music the man made over the course of his life across many labels.  Concord Music comes to the rescue via their Vee Jay Records imprint to reissue a fine collection of (per the hype sticker on the cover) "classic tracks from the prime of the legendary bluesman's career." Indeed, this is a lot of the great stuff you've probably heard but may not have known which versions to get:  "Boom Boom," "Boogie Chillen," "Dimples," "Grinder Man" and "Crawlin' Kingsnake" are all accounted for and sounding great in this nice compilation. Pressed on nice dark standard weight vinyl in a lovely gatefold sleeve with copius liner notes including an essay from writer Bill Dahl, perhaps my only  disappointment is that it doesn't feature a period accurate Vee Jay Records record label but, hey, that is minor thing ; in fact that might well have been misleading as this collection compiles sides from his work on Specialty and Riverside as well as Vee Jay Records. This is a great place to start your John Lee Hooker vinyl collection. 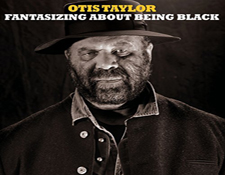 Otis Taylor: Fantasizing About Being Black

I'd never heard of Otis Taylor before this release was sent to me for review consideration, but from the first listen he sounded like a familiar friend, a voice of authoritative, raw and edgy music. I heard echoes of Appalachian folk, traditional blues and deep country roots.  And then I heard the rock and jazz twists. To give you some idea of the palette Mr. Taylor is playing with, imagine a sort of love child between Richie Havens and Taj Mahal with, hmmm... lets say.... how about someone like Jon Hassell tossed into the mix -- really, there are some really super cool ambient-flavored trumpet parts peppering this album!... Maybe just maybe you'll hear some of the influences that Jorma Kaukonen has channeled across his career (Reverend Gary Davis, etc.) and Johnny Winter too.  And just when you think you've got a handle on him, his band kicks into some sort of lost quasi-psychedelic pulse from a lost late '70s Talking Heads set (when people like Robert Fripp and Adrian Belew recorded with them)... The man plays Banjo and Guitar and of course can rip out straight ahead blues ala Muddy Waters and Howlin' Wolf with fat overdriven electric guitar sounds and rich tube amplifier tones cutting through the mix.  Clearly, he's a much more diverse artist and just calling him a "blues" musician doesn't do him justice. Definitely worthy of your attention and exploration. I'd really like to see Otis play live -- I'll bet he's great in concert.  No doubt, I'll be digging around looking for more of his recordings. This a fine sounding CD and I hope this album gets pressed on vinyl at some point. Good stuff! 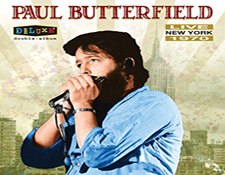 One of the more popular and influential American artists in the mid-60s blues rock explosion, Paul Butterfield and The Butterfield Blues Band was by 1970 an established force on the scene, growing and moving with the times. Jimi Hendrix had raised the bar for all things electric blues and there were legions of heavier outfits emerging, playing variations on the theme of hard rocking electrified blues-based music, from Mountain to Johnny Winter, while Janis Joplin had upped her game with her soulful, horn-drenched Kosmic Blues Band around that time. Butterfield too had been steadily expanding and diversifying his blues sounds with and increasingly bigger and sparkling, soulful jazzy R 'n B horn section.  Butterfield's band from 1967 through 1971 included a young David Sanborn on Saxophone who is on this release, culled from a radio broadcast captured by WPLJ-FM in New York City. It is an excellent snapshot that later period of the band spread across two nicely pressed standard LP records.  The set delivers great sound quality both from the original recording source and via the well centered, quiet, dark black vinyl pressing. There are some scorching performances here which producer Gabriel Butterfield -- Paul Butterfield's son -- says on the cover notes was "the happiest time for Paul in his musical career." 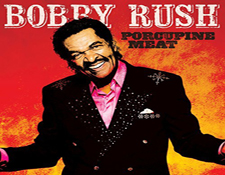 This is a fun CD made by an enduring voice, Bobby Rush.  That this new album has already won a Grammy (Best Traditional Blues Album) is no surprise. Its a straight-ahead, fun booty-shakin' listen. Yeah, the blues can be fun. After all, it is more or less about trying to forget about your troubles and Bobby Rush's latest will get you groovin' from the get go ("I Don't Want Nobody Hanging Around") and into the smooth 'n slinky title track.  He'll draw your tears ("Got Me Accused,"), get you dancing ("Snake In The Grass," "Funk O' De Funk") and rockin' ("Catfish Stew," "Nighttime Gardener," "Standing on Shaky Ground").  This is really good driving music and Bobby Rush's Porcupine Meat album is fine party fuel to chase away those inevitable Summer time blues.  A fun spin.