How Much Does Tracking Angle Matter? More on Transverse vs. Radial Tonearms.

In the last two installments of this series on phonograph- related subjects, I've been talking about transverse tonearms (ones that allow the stylus of the phono cartridge to track the record groove in a straight line, as it was [almost certainly] cut), and radial tonearms (that cause the stylus to traverse the record groove in an arc, correctly perpendicular to the groove at, depending on its "overhang setting" as little as only one point along the way). Of the two, by far the most common is the radial tonearm, probably for reasons of its lesser cost and difficulty of manufacture, but also because transverse tonearms can, due to their greater complexity and to the fact that some of them (Goldmund, ReVox, Rabco, and others) rely on sensors and motors, leadscrews, or drive belts to accomplish their actual motion. These last can - regardless of any other advantage -- be a bear to operate and keep running with the stylus properly in the groove, and at the proper depth and force. 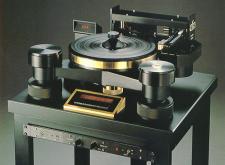 The greatest advantage of transverse 'arms is that, because they ― if, and for so long as they are properly set-up ― can ONLY be at the proper angle to the groove and "tracking error" becomes impossible. One thing, though, by "tracking error", I don't mean keeping the stylus properly in the groove. That's something else, entirely; can result from something as simple as heavy footsteps on a "springy" floor, and is more likely to be the result of insufficient tracking force or excessive groove velocity than of incorrect tracking angle.  The tracking error I'm referring to is the difference between the angle of the stylus of the original cutting head to the groove (90°, exactly) and the angle of the playback stylus to that same groove.

The whole phonograph function is the conversion of energy to movement. In the recording mode, electrical energy causes a cutting stylus to move (from side-to-side in mono recordings, and simultaneously from-side-to-side-and-up-and-down, both at 90° angles to each other and 45° relative to the blank disc to be recorded, in stereo). In the playback mode, the energy of the spinning turntable is imparted to the recorded disc, which, by its groove wiggling the playback stylus, causes the playback cartridge to produce new electrical energy that can be amplified, converted to air motion, and heard as music. The big difference between recording and playback (other than the obvious one) is that, whether in mono or in stereo, the electrical force driving the cutting stylus will always cut a groove as close to the original music signal as is possible to the recording electronics, cutting lathe, and cutting head being used, and the shape of the groove it produces will perfectly reflect the characteristics of that signal and that equipment. In playback, though, while the groove can't cause the stylus to move more than its recorded swing, tracking error - the angle of the stylus being different from the swing of the groove ― can cause the effective swing of the playback stylus to be less than was actually recorded. 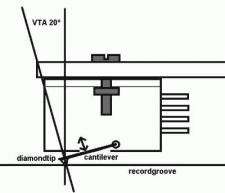 So what does that mean? Well, first let's look at it from an absolute perspective: All of the playback energy comes from the movement of the stylus as it is forced from side to side and up and down by the groove (we'll assume that it's stereo from this point on). Any lessening of that movement must result in a lessening of the cartridge's output each time it happens. And what will that mean? If it were something utterly huge, like a fifty percent reduction, that would, as is always the case when output is cut in half anywhere along the audio chain, result in a sound pressure level reduction at the speakers of 3dB ― a definitely noticeable, but not great difference. In fact, a tracking-error-caused reduction in output that big seems impossible, and might require an angular difference from optimum (this is a guess; I am NOT qualified to judge the likelihood of this actually happening) sufficient to actually damage either the record or the cartridge or both. Whatever the actual output reduction might be, though, there will definitely be a reduction in output.

Now the question becomes, where will that output reduction be, and what will be its effect? Think about this: The swing of the groove at any point always represents a composite of the amplitudes of each of the two stereo channels of signal information at that point, with the actual horizontal/vertical center point of the groove being determined by three things: the movement of the turntable, the center point's last position, and the movement caused by the signal difference between this instant and the last. 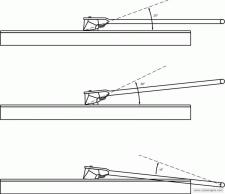 Remember that all of the information for both channels and all frequencies and amplitudes is being either cut or retrieved by a single stylus, and that 1) because high frequency wiggles are smaller (they take less time [grove distance] per single cycle and are typically of lower amplitude than lower frequencies) they are likely to appear superimposed on lower frequency groove shapes. Remember, also, that, for frequencies of any duration, the closer the groove gets to the center of the record, the less linear groove space is available per turn (of the disc), so that a recording of one (second) of signal on an inner portion of the groove must always be more "crowded", and therefore more prone to distortion than it would have been on an outer portion of the same groove. (This matter of linear groove space is why some "audiophile" recordings are cut and played back at 45 rpm: The faster turntable speed means more linear groove space per second and thus potentially higher fidelity, particularly in the higher frequencies.)

What all of this means is that tracking error is most likely to be audible at higher frequencies and near the center (where the hole is) of the record. It also means that because the losses of output level due to tracking error, even from a less-than-wonderful arm are tiny, the real effects of them are most likely to be heard  as distortion in the higher frequencies and in a loss of the very lowest level of "ambience" (the third bounce off the walls of the concert hall) in the music.

In short, the tracking error from a radial arm is real and will always be there, but is probably little worse, if at all, than the flaws (difficulty of manufacture, setup and use; potential "skipping" on some records if not perfectly set-up or if a leadscrew is involved and the record has variable groove-spacing; and even, on some models, audible motor or belt noise) of some transverse arms.

Radial arms do have the potential problem of "skating" - a geometry-caused tendency to slide across the record, missing the grooves entirely, that tangential arms never have, but that can be, and usually is, already countered by a simple "anti-skating" feature on most good radial arms. Other good things can also be done to make good radial tonearms even better: In the design stage, they can be made longer - 12 inches (or whatever), instead of 9 inches (or whatever). Simply lengthening the "wand" of the arm and moving its pivot point accordingly will make the arc traversed by the stylus bigger (part of a larger circle), and measurably reduce tracking error. (That's why you occasionally see pictures of turntables with what seems to be excessively long tonearms).

By setting the "overhang" of the stylus so that at one point it extends beyond the 90° radius of the record, either by adjusting the position of the arm's pivot on its base or the position of the cartridge in its headshell,(special "protractors for this purpose are supplied by most tonearm manufacturers or available commercially), even though the arm, itself, can only be perpendicular to the 90° radius of the record at one point, the path of the stylus can be made to be perpendicular at two points and the percentage tracking error at all other points can be reduced to negligible.

So how much does it all matter? Enough to make it worth getting right if you can, but not enough to worry about, if you can't.