Back in the old days, before the 1980s, I used to think that the reason you might want to use a record clamp was to keep the record from slipping on the platter as a result of drag produced by pulling the stylus through the groove. 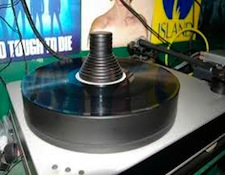 That might actually have been true in the OLD, old days, when people used crystal cartridges with removable "needles" (Genuine Osmium, for example -- good for as many as several plays, or genuine cactus needles good for just one). Back then, the platters were usually puck-drive "flocked" sheet metal stampings; and tracking forces nearing the greater part of an OUNCE [28.4 grams] weren't at all unheard-of. As a matter of fact, in those days, when a record was particularly warped, one of the things we did to be able to still play it was to put a penny (2.5 grams) or even a nickel (5.0 grams) on top of the headshell, so there might very well have been enough weight to cause some drag-induced slippage.

For most modern turntables, though, and for modern high-compliance cartridges with a MAXIMUM recommended tracking force in the range of 3 grams, and (for at least many) the ability to track at a force of as little as 1 to 1 ½ grams, the idea of needing to compensate for stylus drag seems absurd. On the other hand... 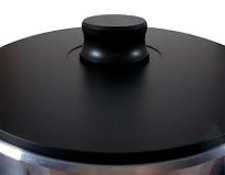 In their quest for (check as many as apply) __ performance; __ beauty; __ uniqueness; __ marketing advantage; __ something else, entirely; a number of modern turntable designers have abandoned the convention of the platter having a full-contact, single-disc shape of about the same size as the records it's intended to play, and have gone, instead, to any number of variants, ranging from a single center support-disc of about the same size as the record's label, to multiple disc-or-other-shaped supporting parts holding the record (essentially) in the air, with more or less actual physical contact. The mass of the rotating assembly (the platter or platter-equivalent) has also varied wildly, from the extreme low mass of the old Weathers™ 'table to the seeming excesses of the Gray™ turntable and others even more massive. The point here is that -- for some of the lightest, weirdest, or least-physical-contact designs -- drag may, indeed be a factor, as it might even be for conventional-looking, high-contact-area 'tables that use a more-or- less-slippery surface (vinyl, acrylic, bare aluminum, ceramic, etc.) for the disc to rest on.

For slippage, there are really only three possible solutions: Either make the platter's surface "non-slip"; use a vacuum system or some kind of a weight or clamp to hold the record in place; or both.

Since time immemorial, cutting 'tables have used a second, off-center hole in the cutting "blank" and a matching lock-pin on the platter to prevent unwanted slippage. The first actual non-slip device for a consumer turntable, though, was probably the good ol' fashion' rubber mat that better record players have been equipped with for almost as long as there have been disc records. 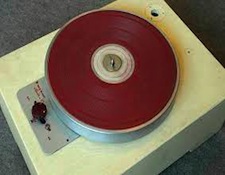 Back in the days when I was a kid, we fervently believed (as Julian Hirsch and other "experts" had told us) that the only parts of a system that actually affected its sound were the phono cartridge and the speaker (Remember that this all started even before stereo came along). Because of that, we thought that that ordinary ridged rubber mat that came with the turntable (red, on my Rek-O-Kut L34, and grey, on my later Rek-O-Kut B12H) was just fine and was all that was necessary. In fact, when, after a long hiatus, I dropped back into audiophilia in the 1980s, I was surprised - and frankly disbelieving - when people told me that the thick, "squishy", Platter Matter™ turntable mat that was popular at the time would make an audible difference. It did, of course - a quite significant one -- and that, possibly more than anything else, got me and others to thinking about just exactly what was happening at the point where the stylus meets the groove.

At that time, there was all kinds of everything from wild-eyed conjecture to learned discourse about Newton and the idea that "for every action, there's an equal and opposite reaction." "If the groove is wiggling the stylus," people thought, "must not the stylus also be wiggling the groove? And if there's that kind of energy transfer going on back-and-forth, what kind of an effect is it having on the sound?"