Does Tracking Angle Matter? More on Transverse vs. Radial Tonearms

In the most recent installment of this series of articles about phonograph records and recording/playback equipment, I started by saying that there are two basic approaches to making a phono tonearm: "transverse" 'arms that move the cartridge they carry across the record in a straight line, and "radial" arms that pivot from a single point and, therefore, carry their cartridge and, of course, its playback stylus across the record in an arc. (I also mentioned "pantographic" arms, like the one from B-J that pivot like a radial arm, but still carry the cartridge across the record in a straight line,  but I said that they "had their own problems" - which came about because of bearing "slop" and "chatter" in their very complex, multi-jointed design.) 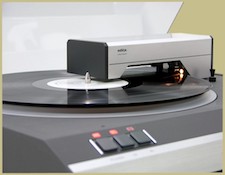 The transverse arm was the only thing possible for playing the early cylinder recordings, tracking them perfectly, as no pivoted arm could ever do. It was difficult and expensive to make, though, (and to get it to work properly in playback mode, with no leadscrew to guide it), That was all there was, though, sotg that was what they used. For disc records, the far simpler and cheaper radial arm worked fine, and was, by far, the preferred design of most manufacturers.

The Pickering "Unipoise" tonearm  was the perfect mid-twentieth century example of just exactly how simple a radial tonearm could be. Consisting of just a roughly triangular aluminum "wand" with a rectangular cross-section and an adjustable (back and forth, to set tracking force by counter-balancing it) wide, weighted, rear section that combined a raised "bearing cup" for its pivot and weighted metal "wings" to provide stability against "yaw", this arm had as its sole mounting point an adjustable (for height) "spike" and no conventional bearings at all. The way it worked was simplicity, itself: You mounted the cartridge (either a Pickering or a Stanton were designed for it) to the working end of the arm; set the bearing-cup (I think it may have had either a ruby or a sapphire bearing-well in it) over the already height-adjusted spike; moved the adjustment on the weighted metal section to get the right tracking force; and, with the pickup wires just trailing off the back-end of the arm, played your records. Because the single contact point between the spike and the jeweled bearing-well was its only source of friction, there was practically none at all. And because the whole "arm" assembly, including its moving weight adjustment and its side-to-side balancing wings were all below the pivot point, it was remarkably stable in all directions. 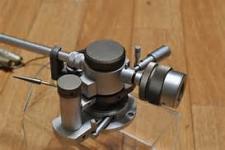 Cheap, simple, and easy to make, to set-up, and to use, the Pickering tonearm was a fine thing.

It did, however, like all other radial tonearms, suffer from tracking error brought about by the simple and inevitable fact that the record, even if it was a disc record, was cut, in every commercial instance, in a straight line, using a transverse cutting lathe and played back in an arc that was truly tangent to the groove at only one point.

So why not use a transverse arm? Well, among other things, it's complex and expensive!  Unipivot arms, like the Pickering, and later, the Stax, could get away with just a single bearing surface to accommodate movement in all directions, and that bearing, as long as there was no slack or wobble at its contact point was - as the Pickering setup showed - not really critical. Conventional arms often require two separate bearings - one for vertical movement and the other for horizontal - but those, regardless of how exotic the arm might be, still usually use bearings that a manufacturer can buy "off the shelf"  for not much money. For transverse tonearms, though, complexity is the rule; off-the-shelf" bearings may be possible only at non-critical points; precision is absolutely essential; and all of those things tend to be expensive.

The problem has to do with the way a transverse arm works:  Generally, this is in one of only two ways: Either, as with the Eminent Technology air-bearing tonearm, there is a round-cross-section fixed- base slider mounted tangent to and to the side of the turntable's platter, and a round inner-hole arm bearing (a bearing "sleeve") travels on it to provide both side-to-side movement (to track the groove across the record) and up-and-down movement (both to set the stylus on, and lift it off the record, and to accommodate record warpage). With the E-T arm, a "wand" of five or six inches long is the part that actually holds the cartridge. This wand is mounted to the traveling bearing which slides along the base slider to reach to a 90° radius of the record and allow the stylus to track the groove at the perfect angle. Another linear tracking arm that worked this way was made by Goldmund and supplied with their turntables. 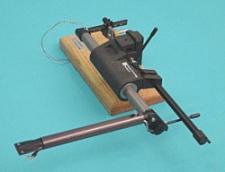 The other way to do a linear tracking tonearm is, as with disc cutting lathes, to have the cartridge, in its mounting bracket, suspended directly over the disc, along a 90° radius and to physically swing the entire tonearm, slider, cartridge, and bearing assembly aside to put records on, or take them off the platter and to have a separate mechanism to set them down on, or lift them off the record. The ReVox linear tracking tonearm is one example of this. The Souther Linear tonearm  was another.

Regardless of which way a transverse arm works, maintaining easy and smooth side-to-side movement is crucial, and that's where other differences come in: The E-T arm has a long air-bearing "sleeve" for all of its movement and, while that bearing IS quite mass-y as compared to the mass of the wand and the cartridge and stylus, it (or any other tonearm, transverse or radial) only has to be accelerated up to a total (at the cartridge) side-to-side velocity of something in the range of 3 to 3 ½ inches per half hour (= 0.0001104 miles per hour), By most standards, that's hardly any velocity at all, and it means that it's not the movement, but its smoothness that becomes the most important consideration. With the E-T being an air-bearing arm, there's no physical contact at all between the bearing collar and its shaft, so moving smoothly (assuming, of course, adequate air pressure from its air pump) should be no problem at all, other than the expense for the ultra-precision matching bearing surfaces and the cost of its air pump.

The Souther arm has rolling bearing surfaces traveling along precision-ground quartz rods to provide a "track" for the cartridge's movement. As with the E-T, the Souther arm is "powered" only by the groove forcing the stylus to the side as it turns under it. Once again, smoothness of motion is the critical factor here and any warpage of, or dirt or dust on the tracks, could throw it off and make for both a set-up, and a listening nightmare.  Tiny irregularities along the (physical) bearing track or, before they became rollers, any bearing chatter at all in the "wheels" riding the track could throw off tracking and interfere with sound quality. 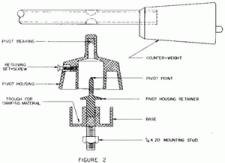 The ReVox and Goldmund arms both tried to solve the problem of moving the cartridge smoothly and noiselessly by going to servo-controlled motorized electronic drive mechanisms, and found more difficulty of initial and continuing setup; more complexity; more expense; and more opportunity for messing-up.

Linear tracking arms DO eliminate tracking error, though, and they also eliminate the need for any kind of "anti-skating" mechanism. We'll talk more about both of those things and how important they are; ttell how radial arm tracking can be improved; and try to finish-off this whole issue next time.

Meanwhile, I'm out of space for now, so thanks for reading, and I'll see you then.