Why Single Ended Triode Systems Make Sense (To Me) 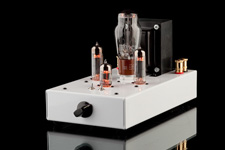 Despite all my years of reviewing true, blue chip audio components and loudspeakers from the likes of Bowers & Wilkins, Krell, Mark Levinson, Meridian, Martin Logan, Paradigm and more, there's one setup, one system that I've maintained since the beginning and that's my SET or Single Ended Triode system.

My personal SET setup consists of a small, American made, hand built Decware SE84S amp/integrated amp churning out a mighty 2 Watts per channel into four Ohms. My entire SET history has been based around this mighty mite and over the years has been paired with a variety of CD players, speakers and cables until reaching what I've found to be the best combo so far-a pair of Zu Omen Def Loudspeakers, Apple TV, Cambridge Audio DACMagic, all connected with Mapleshade Clearview interconnects and speaker cables. Total price? Try less than $5,000 all in.

Being a fan of SET forces you to consider system synergy above all else, for there is no way a two Watt anything is going to push around, let alone make music with a large, inefficient loudspeaker. Right off the bat your options are somewhat limited, now granted there are SET amps that churn out power in excess of 10 Watts or more, but even then you're going to want to mate them with speakers that are at least 94dB or better in efficiency. Efficiency is everything with SET for the more efficient the speaker the more volume, not to mention dynamics, detail, air and extension you're going to get when using a SET amp.

There is something quite magical that happens when you sit in front of a SET system playing in perfect harmony; the sound is effortless and wholly natural, which is why so many who are fans of the SET concept simply refuse to look elsewhere for their audiophile needs. I've reviewed my share of mega-Watt amplifiers, some in excess of 500 Watts per and I've described these amps as having an iron fist or total control for that's what 500-Watts should bring you. But the relationship between many of today's modern loudspeakers and kilowatt amplifiers is one of two boxers beating the crap out of each other in cage match to the death over who's going to be the one to put their "stamp" on the sound. Which is why the sound, while good and in some cases great, always sounds a bit reproduced. Not the case with a properly setup and configured SET system-for instead of your components fighting for superiority they've agreed to play to each others strengths and by doing so play directly to the listener's heart.

Are SET systems perfect? Hell no. Their limitations are clear as day and aren't for everyone or every occasion, which is precisely why I don't keep mine setup and connected 24/7. Now, I know some fans of SET setups are bound to disagree with my last statement but in my personal experience it's true. Most high efficiency loudspeakers don't reach as low in the bottom end and can become a bit unruly when driven hard, especially horn based loudspeakers-though I admit I haven't heard EVERY horn loudspeaker or combination there of. Furthermore, because of their often revealing nature-thanks in part to their efficiency and ability to resolve the minutest of detail-SET favorable loudspeakers don't always play nice with many mainstream components, especially home theater components such as budget receivers and sources. Still, regardless of its limitations (again, I haven't personally demoed every conceivable combination of amp/speakers/source/cable etc.) an SET rig done right is nothing if not musical-not to mention soulful.

Think of SET as taking the Zen approach to being an audiophile, no doubt that's why my personal SET amplifier was given the name Zen Amp from its creator Steve Deckert.