How to Get Better Bass Part 8

Thus far in this continuing series, I've written about the bass response of speaker systems whose enclosures have had the primary purpose of separating the pressure waves from the front of a woofer's diaphragm from the out-of-phase ones coming off its rear so that the two can't meet and cancel out.

Notice that I'm saying woofer here instead of just "driver" because its only in the lower frequencies, where the half-wave lengths of the sounds to be reproduced are bigger (longer) than the diameter of the driver making them, that cancellation is a problem: At all frequencies where the half-wavelength (calculated as: 1125' [the "standard" speed of sound in air] ÷ the frequency to be reproduced [20Hz or 1kHz, for example] ÷ 2 = half wavelength) of the tone to be reproduced is greater than the diameter of the driver producing it, the front and back waves will meet and cancel unless they are kept apart, as by an enclosure. 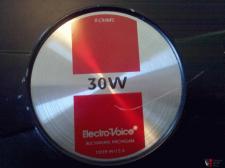 Even though horn speakers also tend to keep the lower frequencies from the front and back of the driver separate (except where such a coming-together has been purposely built-in to boost their output) extending their frequency range wasn't their original purpose. Horn speakers originally came about for the movies and public-address applications where, at least initially, greater volume - simply being louder -- was of greater concern than greater fidelity or frequency extension.

Those early days of speakers were -- from the 1920s (remember that "The Jazz Singer", the first "talking picture", came out in 1927), until the late 1940's, after the end of World War II -- also the early days of electronics. Even the most powerful amplifiers of the time produced only very few Watts, and movies, sports, and politics all needed to be heard clearly by large numbers of people. That made horns, with their typically high sonic output per Watt of input, the ideal choice for making high levels of sound for large rooms, theaters, or stadia, from the limited power available. 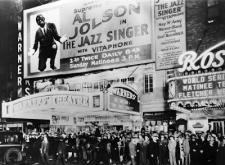 The original horn loudspeakers were, like the megaphones they emulated, just expanding cones open at both ends that made things louder, not by increasing available energy, the way an amplifier does, but simply by providing better coupling of the sound energy from its source (somebody's mouth or the diaphragm of a driver) to the air and by concentrating it all along a narrow pattern of dispersion. There was never any actual amplification of the sound - not even in the original phonographs (either cylinder or disc) which looked as if they were mechanically amplifying the sound created by the playback "needle" (an actual steel needle, or even - as was actually preferred -- a cactus needle) as it was moved (up and down on the cylinders and from side-to-side on the discs) by the groove it was riding-in as the record turned. This movement caused a small metal diaphragm mechanically attached to the needle to move accordingly and to produce sound which was made louder by an attached horn. As paraphrased from the source cited above, the horn structure itself did not amplify, but rather improved the coupling between that moving diaphragm and the air. Properly designed horns have the effect of making a diaphragm (or a modern driver) transfer more of the energy applied to it to the air; which makes the sound louder and the diaphragm or driver appear to have higher efficiency.

An important point, and the one that made horns essential to the movie and PA sound (now called "sound reinforcement") of  their heyday was the fact that - even though it was through an improvement in efficiency of coupling rather than by actual amplification - horns were typically able to provide a 10dB (10 times) increase in available sound level, which, in those days when even a 10Watt amplifier was considered powerful, would raise the sound from that amplifier to a level that would otherwise have required 100Watts or more to produce. 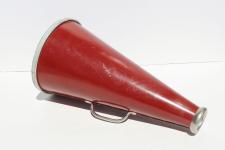 Like megaphones or the horns shown in Victrola ads, early speaker horns and horn speaker enclosures were small and were neither able nor intended to handle low frequencies. The fact of it, though, was that such frequencies were simply not available in usable volume from the sound sources then available, so the ability to effectively deal with them was not needed.  As recording technology improved, however, and deeper and deeper bass could be recorded, the size and length of the horns needed to be attached to speakers or to the horn enclosures in which they were mounted grew, too.

The four things most crucial to horn operation are their initial opening ("throat") size, their overall length; their shape (meaning the rate or rates at which they expand in cross-section as they grow longer; and their final opening ("Mouth") size. All of these things are related to the wavelengths they will be required to pass and, by the late 1940s and early '50s, when 50Hz or lower was readily available from many recordings and the lower bass limit of the (14 cubic foot infinite baffle) Bozak B-310 was, at 24Hz -- a full octave lower -- horns for the lowest frequencies found themselves at a distinct disadvantage, both in terms of size, and because their drop in performance below their horn's "cutoff" point was much faster than that of other types of enclosure/driver systems.

According to Martin Colloms, in his book High Performance Loudspeakers (Halsted Press, 1978) In order to get down just to 40Hz, a horn's mouth area should be (p.88) "5.9 m2", and he went on to say that "Such a design would need to be custom built into a location as part of a fixed structure, and is clearly impractical for most domestic situations."

Yet, there was a way to get a big enough horn mouth for good bass into an ordinary home listening room - and even to get two of them into that same room for stereo.

I'll tell you all about that and other horn-related things next time.