How to Get Better Bass Part 4

In previous parts of this continuing series, I wrote that, even if your speaker's bass driver could make great deep bass, if you couldn't hear it, that bass, for all practical purposes, wouldn't exist. (Sort of like that tree falling in the forest). I also wrote that the most likely reasons for you not to be able to hear it are that: 1) Both sides of a driver's diaphragm (the front and the back) produce sound; 2) because  movement that will produce a positive pressure ahead of the front of the diaphragm will always produce negative pressure behind it, the sounds from the two sides of the diaphragm are always 180° out of phase with each other; 3) because the two out-of-phase sounds are produced at exactly the same amplitude (loudness) by exactly the same movement, the two sounds (pressure waves), if they ever come together, will cancel each other completely, leaving no bass energy left to hear. 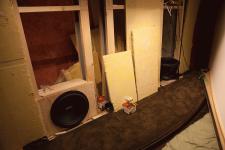 The way to keep that from happening, I wrote, is to use some kind of "divider" to keep the front and back waves apart; the simplest kind of which would just be a huge board (an "infinite baffle") with the driver mounted over a hole in its center so that the front wave would come out on one side of the board and the back wave would come out on the other. Because that board would be too big, though, (56 feet across, plus the diameter of the driver in every direction) to get into almost any home, alternative techniques had to be developed to keep the waves apart, and from those came the whole subject of speaker enclosures.

After just a big board, the next easiest options (When they start to get fancier, we call the dividers "speaker enclosures")  were to trap the back wave in a big (or at least not small enough to affect the driver's motion) closed box (called an "infinite baffle enclosure"), to lose it to someplace harmless (into another room or up a chimney and out of the house, for example) or simply to absorb it ("transmission line"-style) effectively out of existence.

Or, I said, you don't really have to lose the back wave, you can also turn it to your advantage by making it work for you - either to make deeper or louder bass or to allow for decent bass production from a smaller box or with less amplifier power. There are a number of techniques for doing that, and the first that I described was the "bass-reflex" speaker enclosure. 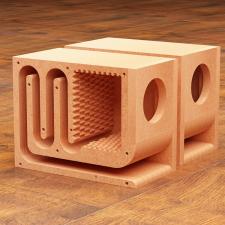 The very simplest bass-reflex design is just a box that has a hole in it (a "port") and uses the back wave from the driver to create a Helmholtz resonance in the air inside the box and cause a pressure wave to come out of the port. If properly designed, that wave is in phase with the driver's front wave and at a frequency lower than the driver's fundamental resonance. That can be used to help the driver's bass extension or, if the resonant frequency chosen for the air in the box is very close to the resonant frequency of the driver, it can help with loudness or bass efficiency per Watt of input. In either case, because the sound produced by combining the front and port waves will be loudest at the fundamental resonance frequency of the column of air in the box, there can, in addition to the dulling of bass transients and trailing resonant "ring" characteristic of this kind of enclosure, also be a quite noticeable tendency toward single-frequency or "one-note" bass.

A number of methods have been developed to solve this problem, and some of those were what I promised to write about in this installment.

The very most common "fix" for one-note bass is simply to use a "tuned" port for the enclosure. Instead of just cutting or drilling a hole of a calculated size in the material of the enclosure, the "tuned port" enclosure adds a "tube" (usually round, but sometimes rectangular, as the designer prefers) to extend the effective length of the hole, also by a calculated amount. That both changes the effective resonant frequency of the air column inside the box, and adds a second resonant frequency for the air inside the port "tube". The result is twofold:  First, with two additional enclosure-related resonant frequencies instead of just one, bass response is smoothed and the tendency toward one-note bass greatly lessened. Second, by making the port tube in two pieces, sliding against each other (like the concentric nesting tubes of a telescope), it's actually possible (on speakers fitted with it) for users, by making the port tube longer or shorter, to tune the sound of the woofer to their own tastes and preferences. In short, it can be a consumer-operated "tunable" tuned-port.

Another approach (or possibly simply another variant on the conventional tuned port scheme) was to use what was, at the time called a "distributed port" design. In researching this article, I've found a number of different approaches to this sort of thing , but not any one definitive form, only a single philosophy: That being to use anywhere from a few to many smaller ports  instead of just one big one. And a variation on that variation - also called a "distributed port" and apparently used by some European manufacturers - was a single round port stuffed lengthwise (like toothpicks in a cylindrical dispenser), with small diameter tubes ('straws"), sometimes of different lengths, and apparently intended to provide multiple resonant frequencies to the port, instead of just one single one, and thereby to smooth the speaker's response even further.

Another resonant type of enclosure similar in results to a bass reflex system involves the use of a "passive radiator" instead of either just a hole in the box or a tuned port. Regardless of the fancy name, a passive radiator (sometimes also called a "drone cone") is really just a conventional cone loudspeaker without its motor (the voice coil and magnet/pole-piece assembly). When mounted to a speaker enclosure instead of a bass-reflex port, it functions largely the same as a port would (compression or rarefication of the air in the box as a result of movement of the powered driver causes the passive radiator cone to move back and forth ― to "resonate", in short - exactly as would the volumes of air contained in the box or the port tube, and with exactly the same effect.  With either a reflex port or a passive radiator, mass - either the mass of the enclosed air or the mass of the radiator cone will be a determinant of the system's fundamental resonance frequency, and thus bass response. The major difference is that the mass of the passive cone (and thus its resonant frequency) can be easily controlled, and that can allow for better bass response from a smaller box than might be required for a conventional bass-reflex system. 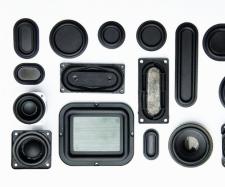 With both the distributed port system and passive radiators using resistance (acoustical or mass-related)  to control box and/or  port resonances to improve loudspeaker bass response, it was only a small step to the "resistive port" (or "aperiodic") designs offered by such companies as Dynaudio and Scan-Speak. Those don't work like a bass reflex system, but more like a "leaky" sealed box enclosure, and they can work quite well.

I'll tell you more about them and other things next time.