How to Get Better Bass Part 14

I started this 14-part series about loudspeakers and bass reproduction months ago by talking about how speakers make sound by moving a diaphragm back and forth to produce alternating zones of high and low pressure in the air (high pressure in front of the moving diaphragm, and low pressure behind it). I then went on to say that one complete forward and back set of movements (creating one high-pressure wave and one low-pressure wave sequentially on the same side [front or back] of the diaphragm) constitutes one "cycle" (one "Hertz"); that the number of cycles per second is the "frequency" of a sound"; and that the "wavelength" of any frequency is equal to the speed of sound in air (normally considered to be 1125 feet per second at sea level) divided by that frequency, so that, for example, the wave length of a 1,000 Hertz (1kHz) tone equals 1.125 feet (1125'  ÷ 1,000 = 1.125') or that of a 20Hz tone equals 56.25 feet (1125' ÷ 20 =56.25'). Finally, to get around to the specific subject of bass, I said that: "The problem with bass, or any frequency where [half] the wavelength is greater than the diameter of the driver producing it, is that pressure waves produced by and spreading from the front of the driver can meet the out-of-phase pressure waves produced by and spreading from the back and cancel, leaving little if any audible bass, no matter how much is actually being produced by the driver." 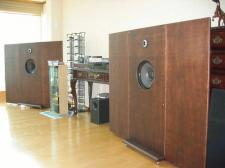 Considering that the very largest driver ever put into practical use for home audio reproduction is 18 inches in diameter; that that diameter corresponds to the half-wavelength of a frequency of 375Hz (1125' x 12 = 13,500" [the speed of sound in inches] 13,500" ÷ 18" [woofer diameter] = 750Hz [full wavelength] ÷ 2 = 375 Hz [half wavelength]); and that 375 Hz is more than three times higher than  the lowest frequency of the male human voice (which despite Barry White, I don't think of as being very deep at all) that means that we can - unless we do something to prevent it - normally expect front wave/back wave bass cancellation from just about any speaker we might ever use.

That's been the basic thought behind this whole series and, until now. What I've really tried to show you is all the ways in which designers have worked to either keep the back wave from the diaphragm from ever meeting with and canceling the front wave, or to develop techniques or technologies for using the back wave to augment the front wave for deeper or louder bass.

Thus far, I've written about using giant boards to mount the drivers on ("infinite" baffles); or open boxes; or large closed boxes (also called infinite baffles); or small ("acoustic suspension") closed boxes, or really small closed boxes (like the Carver [Sunfire] "True Subwoofer", which uses gobs of power to conquer all); or horns -- straight ones, "folded" ones, and even "corner" horns, like the Klipschorn, the Electro-Voice Patrician, and the Lansing Hartsfield - all to keep the waves separate. I've also written about many of the various kinds of "reflex" or "tuned" enclosures that use the back wave (or at least a resonant artifact of the back wave) to enhance the overall performance of the speaker, and even the "transmission lines" and other kinds of enclosures that might do either of those things, or - at different points along the frequency spectrum, a little of each. 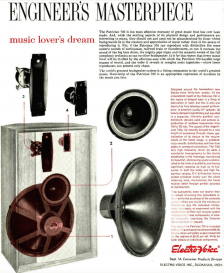 Now I'm going to do something entirely different; something that I touched-on back in Part 1, when I started to say something about "panel" speakers, which are normally fairly exotic -- things like the Magnepan or Eminent Technologies "magnetic-drive" speakers, or electrostatics, like the Martin-Logans, Quads, or my three pairs of Acoustats - but that can also be just (usually multiples of) ordinary cone drivers mounted on a board not much bigger than the minimum needed for them to fit.  I'm going to talk about bass speakers that neither keep the waves separate nor use them both for better performance.

Panel speakers may fall into this category. Although, as is the case with my Acoustats, which are nearly eight feet tall (but only eleven inches wide) the panels may be big enough in one direction (their height, in this case) to partially protect against front wave/back wave cancellation (At 94 inches tall, sound from the center of them has, in the vertical plane, partial baffling down to 72Hz.), they're -- even vertically - not sufficiently large to act as classic "infinite baffles", and, horizontally, at just eleven inches wide, they're really no baffle at all. 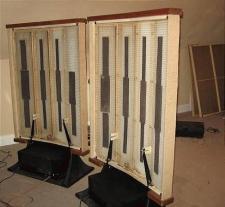 Starting some years ago, however, there's been a small but growing number of speakers (both full-range and woofers, only) that have pretty much dispensed with baffles entirely except just as places to mount the drivers. Somehow they still seem to offer at least adequate bass. So how do they do it?

As I said in Part 11, whether by boosting the bass or by cutting everything else, the answer is always "equalization" ("EQ"), What's interesting, though, is that EQ isn't always what we expect it to be, and can be applied in many different ways, both electrical and physical:

At a recent hi-fi show, for example, I heard one brand of multi-driver "open-baffle" cone speakers that sounded good and seemed to have at least reasonable bass response, When I asked the manufacturer how he did it, he told me that he used no equalization, just very special bass drivers and a (probably about four inch deep) "rim" around the back side of the driver mounting board. 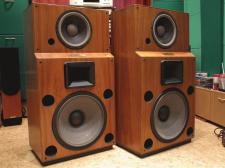 What he didn't say was that the speakers, although narrow, were quite tall - perhaps as much as seven feet (2.13 meters) - so they provided some degree of partial baffling, just like my Acoustats. The rim, too, by making for a longer path for the front wave to get to the back than for the back wave to meet it, made for some degree of phase difference in the two meeting waves so that front/back cancellation could never be perfect at any frequency (thus reducing the need for compensatory EQ) and, as just two more of several possible factors, the crossover slope and the relative sensitivity of the woofers (how loud they are per Watt of input as compared to the midrange and tweeter drivers) could both have been selected or tailored to make the bass louder than the other frequencies so that, even given bass cancellation, the relative frequency balance would still be acceptable even without electronic equalization. Resonant peaks, too, could have been engineered into either the woofers or their mounts that would serve or add to the same purpose. 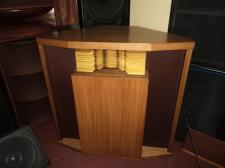 And finally, just room placement can have a strong effect on a speaker's bass performance, whether baffled or not: Do you want more bass? Just move your woofer(s) against a wall. Want still more? Move them it/them into the corner(s). Want less? Raise the woofers up as far as you can from the floor without getting too close to the ceiling. Reinforcement (or lack of it) will do the rest.

The bass frequencies really are the foundation of the music and a strong contributor to its emotional appeal. Now you know a little more about how speakers work to make it for you. I'll be back next time with a different subject entirely.