How to Get Better Bass Part 13 - The Carver Cube

In last week's article, Part 12 of this continuing series, I wrote about Bob Carver's "True Subwoofer" (another "very Bob Carver" true and not at all bashful name, like, for example, "The Amazing Loudspeaker"). Genuinely innovative; that was an outstanding and outstandingly successful product that was marketed under the "Sunfire" brandname and, with certain improvements and model changes along the way, set the paradigm for the small modern self-powered subwoofer. At just 11" x 11" x 11", and with just two 7" drivers, it was claimed to be able do 108 dB a18Hz, which might very well be enough to crack walls and satisfy even the wildest Bass Crazy's darkest urges!

The problem with that article was that it was wrong in one of the most basic facts about the woofer's operation. 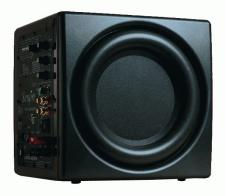 In the top paragraph of column 7 of Carver's 1998 patent application (there apparently was at least one more, dating back as far as the 1970s, but I've never seen it,), it says: "As here shown, the subwoofer 50 includes a cabinet 51 which encloses two drivers, generally indicated at 100 (only one driver is visible in FIG.1; and the details of the exemplary driver are more specifically shown in FIG. 2) which are each oriented in a PUSH/PULL configuration on opposite sides of the cabinet.51. That is, the visible driver 100 depicted in FIG. 1 is mounted in one wall of the cabinet 51 (here the front wall 52 of the cabinet) and fires in a first PUSH or PULL direction; while the second driver 100 (not visible in FIG. 1, but mounted in the opposite or rear wall 52 of the cabinet in the illustrative embodiment of the invention) simultaneously fires in the opposite PUSH or PULL direction."

What that meant to me was that driver #1 was mounted on (let's call it) the NORTH wall of the cabinet and that driver #2 was mounted on the SOUTH wall. Further, it meant that, because of that mounting arrangement, driver #1 would be facing NORTH and driver #2 would be facing SOUTH. That being the case, if driver #1 was given a PUSH (move forward) signal and driver #2 was simultaneously given a PULL signal, the diaphragm of driver #1 would move NORTH and the diaphragm of driver #2 would also move NORTH and, with both diaphragms moving in the same direction, it would 1) be reasonable to call that a "PUSH/PULL" arrangement. 2) It would also mean that, with both drivers identical (column 7, paragraph 4 says: "For all practical purposes, and with but a single exception, hereinafter noted, the two drivers 100 are identical in construction and mode of operation; and, therefore, a description of one driver 100 is equally applicable to the other.") and receiving an identical but out of phase signal, both diaphragms would move not only in the same direction, but also the same distance. That would 3) mean - with both diaphragms moving equally forward and back in the same direction - that the internal volume of the cabinet would remain unchanged, and there would be NO internal pressure buildup, and 4) the movement of the diaphragms would result in a positive pressure wave on one (the NORTH) side of the cabinet and an equal negative pressure wave on the SOUTH side of the cabinet, which 5) would cancel each other, leaving no bass audible. 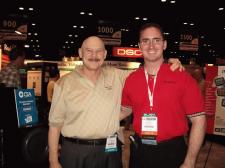 That's what it looked like to me, but before I started writing, I tried to contact Bob Carver, the woofer's inventor, to get the real "scoop". Frankly, something seemed awfully "fishy" to me, and I couldn't imagine a man as well-known and highly-regarded as Bob Carver making such an obvious mistake.

To get the information I wanted, I first tried calling Carver at both his cell phone and his land line. He wasn't available on either for any of my calls, and not only could I never speak with him, I could never even leave a message: One line just hung-up on me after several rings, and the other informed me that its "mailbox" had never been set-up.  Then I tried calling, Mary Cardas, who had been a top executive at Sunfire, the company that made and sold Carver's "True Subwoofer".  No luck. Mary was either out of town or never got my call. Finally, in a last attempt to straighten things out, I called Sunfire and spoke with one of their Tech Support people, who told me, going in, that he was no expert on that product, but did confirm that the Sunfire Woofer drivers were set-up in "push-pull", and that as one moved-in, the other did move out.

With both the patent application saying it and the Tech Support guy confirming it, I could see no reason to further doubt the Carver (Sunfire) woofer's "Push-Pull" operation, and I simply decided to write about it as it seemed to be, expressing my own doubts in the process.

Then, on the day before the article was scheduled to be released, Bob Carver called me. It seems that even though his phones couldn't take my messages, they did record my attempts to reach him, and he called me back to find out what I had wanted. 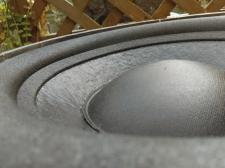 In conversation, he said - as I had suspected - that the drivers do NOT move in the same, but in OPPOSITE  directions, with both driver #1 and driver #2 moving out or in at the same time. (If this seems confusing, consider that the drivers face in opposite directions: "North" and "South", so that if the diaphragms of both move forward relative to their drivers, one is moving North and the other is moving South - opposite directions)

With this information, all of a sudden, it all became clear: moving the diaphragms in opposite directions means that both are always producing the same pressure - either positive or negative, so there can be no cancellation. Also, with both diaphragms moving as much as 1 ¼ inches in either direction, the pressurization or evacuation of the cabinet must be enormous. (given the cabinet's stated internal volume of 0.495 cubic feet [= 855.36 cubic inches] the driver's stated [in the patent application] air movement volume of "almost 200 cubic inches" could result in total internal volume changes and corresponding pressure differentials of well over 20% -- vastly more than in any conventional speaker, and quite obviously why "more than 2,000 Watts" of available power is needed.

So now the mystery of the Sunfire woofer is solved; the error in Part 12 is explained; and it's time to move on to other things. Unfortunately, I'm out of space, so I'll have to get to them next time.