Why Do Audiophiles Resist the Allure of Powered Speakers?

Acoustician, Bob Hodas, tells a funny (or perhaps scary) story about going to the Pacific Northwest to do a special demonstration of Meyer Sound X-10 speakers for an audiophile society event. The Meyer Sound speakers are the only horn speakers that I've ever heard that I thought avoided that cupped hands sound that you get from most typical horn-loaded speakers. They also are a dynamic as hell which makes them a hit in the pro audio world. They are ugly looking speakers in terms of form-factor, but they are really designed to go behind a screen or be used in a studio. The trick is that they are powered speakers - that means that they have amps inside of them for all of the drivers, not an uncommon feat in the world of pro audio, but an oddity in audiophile circles. 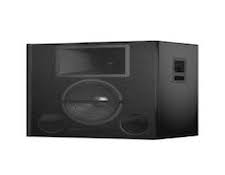 Bob has some magical tracks in his "active" demo thanks to working with so many of the best studios, engineers and producers. It didn't take long for the audience on hand to proclaim, "This is the best sound that we've ever heard" immediately followed with the question "How do we change the amps?"

Wait... Huh? Why in the world would you want to change the amps on the best sounding speakers that you've ever heard? Therein is the audiophile conundrum. Is "great" ever good enough? Is the itch to tweak never completely scratched? Bob packed up the speakers and headed back to Berkeley without making a sale or likely changing any audiophile minds about sound, even when using some of the best speakers the pro audio world knows.

Powered speakers are popular in other parts of the world and in other enthusiast circles. The concept is that the performance of the power amp can be matched to the exact needs of the crossover, drivers and cabinet, which makes for better overall performance. The lack of heat in your equipment rack is another benefit. Its simplicity adds to the powered speaker alure yet somehow it never sank in for American audiophiles.

Speakers like the top offerings from Paradigm in their new Persona line offer a hybrid powered design. They have internal amps for the bass drivers and then leave the easier-to-drive midrange drivers and tweeters up to the end user to power however they wish. This is an interesting way to address the advantage of powered speakers without crossing any audio taboos. Add a 25 Watt Class-A operation amp like Pass Labs' new XA-25  to drive the midrange and treble drivers and you've got the sweetest, most open highs paired with punchy, dynamic lower frequency performance. That's a nice combination.

It's not to say that there haven't been powered speakers in the audiophile market per se. Meridian's DSP line of speakers are not only powered but have much of their processing in the actual speaker itself. One might argue that these stunning sounding speakers from the U.K. aren't really audiophile speakers because they are expensive lifestyle speakers. Often audiophiles stayed away from such a product because they didn't offer the opportunity to tweak and modify a system. Gone was the ability to swap out interconnects and speaker wires. You were in Meridian's world now and that's pretty much where you needed to stay if you went that route.

Hybrid electrostatic Martin Logans employ powered subwoofers, as do many offerings from Definitive Technology, GoldenEar and others. It's not uncommon to see electrostatic speakers that need to be plugged into the wall but for some reason the idea that a speaker is fully powered internally isn't popular with the audio enthusiast crowd despite the obvious design and value benefits.

The future of speakers points towards powered options. Bluetooth connectivity and powered products are staples in the world of wireless audio and that likely won't change anytime soon. The ease of setup and low cost of entry for products from the likes of Sonos, Riva Audio, HEOS, Blue Sound and so many more is only the start of things to come.

Do you think audiophile companies should start looking at incorporating the best of electronics design inside of speakers in the coming years? Or is the need to upgrade, tweak and personalize an audiophile system the core of the hobby? Would powered speakers ruin all that audiophile fun? We look forward to hearing your thoughts in the comment section below...