Maybe You Do Need More Than One System

The first time I ever heard a Big Band recording played in Hi-Fi, the speaker was an Electro-Voice Patrician. Because that was some time in the 1950s, the recording was, of course, in mono but, even so, I remember being just about knocked-over by the dynamics, the power, and even, somehow, the sheer physical SIZE of the orchestra and the way just that one speaker made it dominate the entire listening room at Valley Electronics Supply - the store where, after our various conversions to audiophilia (mine was, as I've said so many times before, at Emmons Audio, with a Bozak and a pipe organ), I and my young Hi-Fi Crazy pals would go to hang-out whenever we could, and just LISTEN. 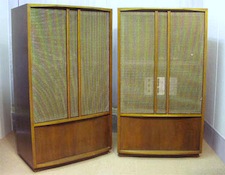 The Lansing Hartsfield was good, too, as was the K-horn and University's top-of-the-line (whatever it was called), but the Patrician - especially the one with the 18-inch woofer (even though woofers up to 30 inches were available) -- was the one that really blew me away.

I also remember the phenomenal stereo imaging of some tiny Harbeth speakers I once heard playing chamber music in Hong Kong many years later, and the way that the Acoustat "X" tube amplifiers that David Weinhart brought to my house sometime in the mid-'90s made my Acoustat 1+1s just SING!

Over the years, there have been LOTS of things - often speakers, but certainly not always - that have curled my toes and caused me to lust after them; but always just for some specific purpose: The Avalon Ascent, speaker system, when I first heard it, impressed me mightily by its ability to get that "blaatt-y", hard (and even a little bit nasty) edge at the top of the sound of most brass instruments just right. On violins, too, which in "real life" can have a sound far different from the "lushness" or "sweetness" so often ascribed to them, the Ascents exposed the sharp sawing sound of each little horsehair barb on the bow and revealed the actual sound of a violin to be something far different from anything Mantovani might want to be known for. What the Avalons did for those instruments was wonderful, and brought a credible reality to their sound far greater than any other speaker I had heard before. The problem was that they also brought that same delicious and revelatory hardness and raspy-ness to clarinets and other woodwind instruments, where it was neither delicious nor revelatory, but just plain wrong.

The famous and immensely popular Dahlquist DQ-10s had one fabulous trick, too: By virtue of their unusual driver array they were able to portray huge spaces - concert halls, amphitheaters, and even the open field at Woodstock better than almost anything else then available, but just as the Avalons had not only put the perfect "edge" on brass and strings, but had also imposed it on everything else, as well, the Dahlquists made EVERYTHING played on them seem HUGE, even when it wasn't supposed to be. 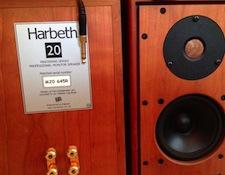 The Harbeths that I had so greatly enjoyed, and that had made the Andante con moto of the Schubert Opus 100 trio seem so perfectly real that I had felt like I could have actually reached out and touched the performers were also, in that same sense "one trick ponies": They were exquisite for what they were exquisite for, but for other things - deep bass, anything BIG, anything really LOUD, filling anything with sound other than the most intimate salon - they were, justly and as was to be expected, but still unfortunately, just as inadequate as a pair of Patricians of Klipschorns would have been playing that same Schubert trio in a small room.

The fact of it is that even my Acoustat 1+1s (With Kinergetics' superb subwoofers) which, at least for me, are the best all-around speakers I have ever come across, are easily blown-off IN SPECIFIC AREAS OF PERFORMANCE AND FOR PLAYING SPECIFIC TYPES OF MUSIC by any number of other speakers that excel in the areas or for the types of music that the Acoustats are weak in.

To carry that thought to its logical conclusion; even though I like the Acoustats well enough that I own three sets of them and am perfectly satisfied with their performance for the types of music that I most often listen to, there are still a LOT of other speakers (and other Hi-Fi goodies, too) that I would like to have just because they're so great for some specific purpose: I would still love to have a pair of Patricians or Klipschorns, for example, just for Rock n' Roll, (and would power them with tubes); and a pair of Infinity IRS or Wilson WAMMs (driven by my Krells or Rowlands) for playing the great big stuff in the great big room that I don't have, but would love to; and a pair of any one of a number of specialized near-field monitors (self-powered, of course) for entertaining me at my desk while I work. 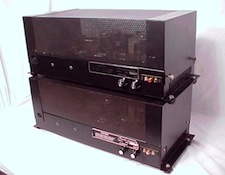 Similarly, I would love to (and DO) have both solid state and tube electronics and use each for what it does best. And both analog and digital, for the same reason. And, to cap it all off - if you're surprised by this, give another thought to your own listening habits -- I'd want an-least-decent-sounding radio (FM, please, for music and AM for talk) for the times when I just want to have something playing in the background, but don't want to have either to pay any attention to it or to regularly have to get up, select something to play, and put it on or turn it over. At those times, I'm perfectly happy to let somebody else be the disc jockey; I just want to do whatever I'm doing.

And that, finally, gets us to the real point of this article: I HAVE FOUND THE ANSWER TO COMPULSIVE AUDIOPHILIA: Instead of doing what it seems so many of us do, and perpetually re-working, adding to, "up-dating", or even just plain replacing our system in hopes of getting it to be "all things to all music", let's finally realize that that's just plain never going to happen and, instead, recognize that different things do different things well, and put together multiple systems so that we'll always have at least one that will do whatever we want it to do brilliantly!

How many systems would that have to be? I don't know, but probably a LOT. What do you think? What would be right for YOU?