On Imaging and Loudspeakers 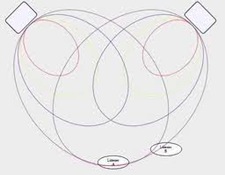 We audiophiles use the term "imaging" a lot. What does it mean exactly? According to J. Gordon Holt's audio glossary, "imaging is the measure of a system's ability to float stable and specific phantom images, reproducing the original sizes and locations of the instruments across the soundstage."  J. Gordon's description of "soundstaging" further elaborates the concept, "The accuracy with which a reproducing system conveys audible information about the size, shape, and acoustical characteristics of the original recording space and the placement of the performers within it."

Between J. Gordon's two definitions we have a pretty good idea of what ideal imaging should be - the accurate recreation of the spatial cues in a recording. But what components in the reproduction chain have the most impact on a system's imaging? I would bet on speakers.

In the Facebook SIG Audiofile Network many posters took exception to this. While Paul is an old friend I have to side against him on this one. Sometimes, with some speakers, in a properly set-up system, the front of the image can begin in front of the speakers themselves. I've also heard some speakers where the front edge of the image begins in a plane that is definitely behind the front of the speakers. In each of these cases there was nothing wrong with the way the speakers imaged - they both created a convincing three-dimensional soundstages, but the location of the front edge of the soundstage was drastically different.

Obviously speakers with radically different dispersion patterns can be expected to create different soundstages - there's no way an open baffle or a dipolar design is going create the same image as a sealed front-firing cabinet design - they energize a room differently and have different power-handling capabilities But a good open baffle, dipole, or sealed cabinet design can image very convincingly, even if the front of their image begins at different locations.

Even headphones have imaging size and location differences - open backed designs tend to have a larger soundstage than closed back designs. Also with headphones the specificity or precision of the image focus can vary depending on the basic design with closed back and in-ear designs usually having a slight edge.

Is there one speaker design that guarantees better imaging and soundstaging than others? I would have to say, no, there is not. That's because the room and the speaker interact to form a system that creates the image you hear. Trying to isolate a speaker's characteristics without taking the room into consideration is almost completely futile (unless your listening space happens to be an anechoic chamber.) Obviously personal preference plays a big part in this whole discussion. For some audiophiles image size is most important, while for others image specificity trumps image size.